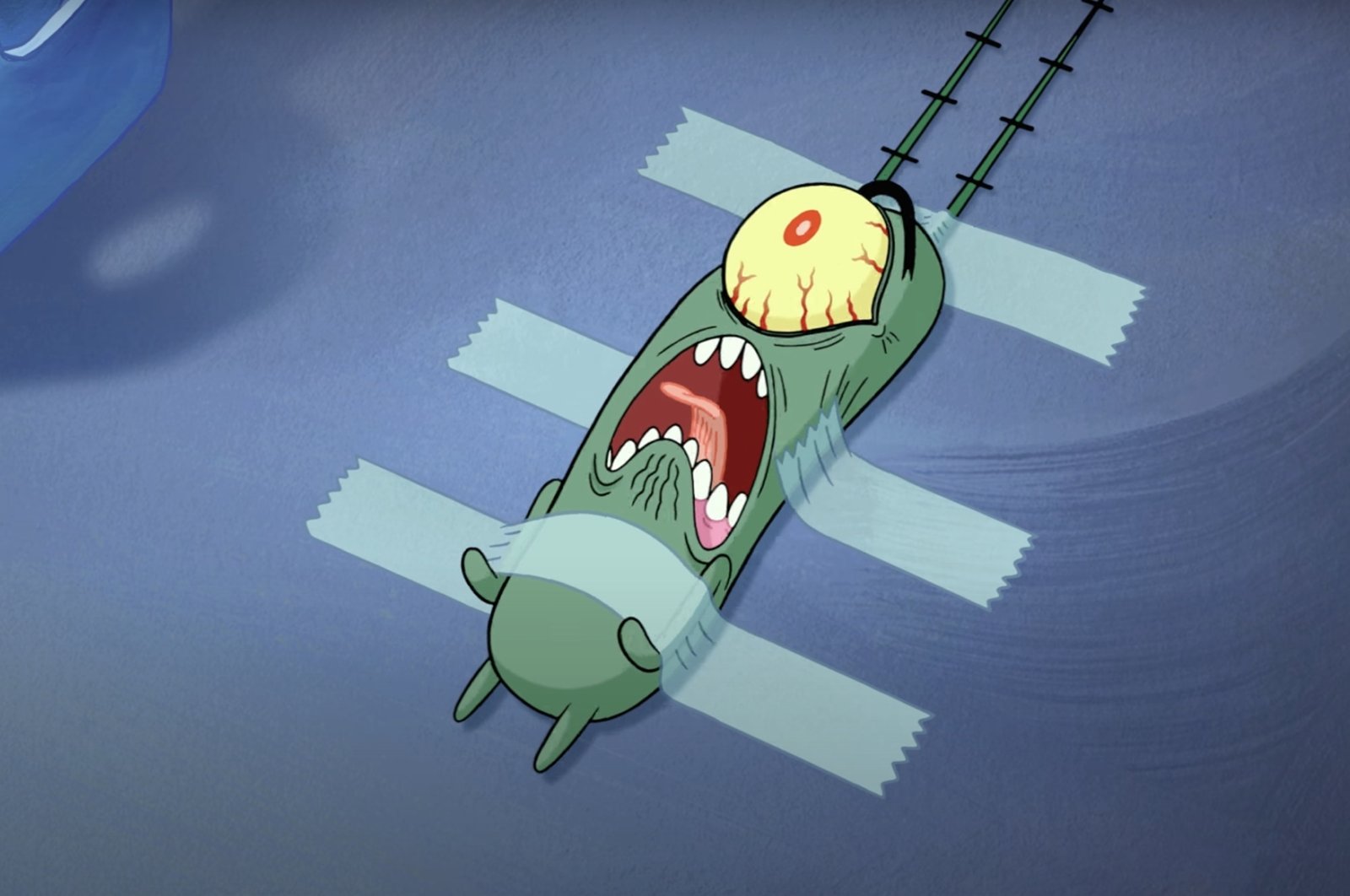 The character Plankton, in a still shot from the animated film, "The SpongeBob Movie: Sponge Out of Water." (Screenshot via Paramount Pictures International YouTube Channel)
by French Press Agency - AFP Oct 25, 2021 1:30 pm
RECOMMENDED

Plankton, marine drifters, a diverse collection of organisms carried along by tides and currents, help scientists understand what is going on under the water and how climate change threatens the oceans and the continents.

The strange metal box hauled from the waves and onto the ship's deck looks like a spaceship fished from a child's imagination.

But when scientist Clare Ostle opens it up and draws out the silk scrolls inside, she is looking for the telltale green glow from some of the most important creatures on Earth: plankton.

This is a Continuous Plankton Recorder, torpedo-like devices that for 90 years have been towed by merchant vessels and fishing boats on a vast network of routes. They help researchers better understand the ocean by collecting some of its smallest inhabitants.

What they have seen is that as climate change heats the seas, plankton are on the move – with potentially profound consequences for both ocean life and humans.

Plankton – organisms carried on the tides – are the foundation of the marine food web. But they are also part of an intricately balanced system that helps keep us all alive. As well as helping produce much of the oxygen we breathe, they are a crucial part of the global carbon cycle.

"The big thing that we're seeing is warming," Ostle, coordinator of the Pacific CPR Survey, told Agence France-Presse (AFP) as she demonstrates the plankton recorder off the coast of Plymouth in Britain.

The CPR Survey has documented a decisive shift of plankton towards both the poles in recent decades, as ocean currents change and many marine animals head for cooler areas.

Smaller warm water plankton are also replacing more nutritious cold water ones, often also with differing seasonal cycles, meaning the species that feed on them need to adapt or move too.

"The big worry is when change happens so quickly that the ecosystem can't recover," says Ostle, adding that dramatic temperature spikes can lead "whole fisheries to collapse."

With nearly half of humanity reliant on fish for some 20% of their animal protein, this could be devastating.

Plankton is a catch-all term from the Greek for "drifting" and encompasses everything from photosynthesizing bacteria many times smaller than the width of a human hair, to jellyfish with long trailing tendrils.

There are two main types: phytoplankton, diverse plant-like cells commonly called algae; and zooplankton, animals like krill and the larvae of fish, crabs and other marine creatures.

Phytoplankton photosynthesize using the sun's rays to turn CO2 into energy and oxygen.

In fact, scientists estimate the seas produce around half the oxygen on Earth, and that is mostly thanks to phytoplankton.

They are also crucial to the ocean's "biological carbon pump," which helps the sea lock away at least a quarter of CO2 emitted by burning fossil fuels.

While trees store carbon in wood and leaves, phytoplankton store it in their bodies.

It passes through the food web, with phytoplankton consumed by zooplankton that, in turn, are eaten by creatures from birds to whales.

"Pretty much everything you can think of in the sea at some stage of its life cycle will eat plankton," says CPR Survey head David Johns.

When organic matter from dead plankton or their predators sinks to the ocean floor it takes carbon with it.

But scientists warn that climate change has stressed the system, with ocean temperatures rising, fewer nutrients reaching the upper part of the ocean from the deep and increased levels of CO2 acidifying seawater.

Climate change has "exposed ocean and coastal ecosystems to conditions that are unprecedented over centuries to millennia with consequences for ocean-dwelling plants and animals around the world," said the U.N.'s Intergovernmental Panel on Climate Change (IPCC) in a leaked draft report on climate impacts, due to be published next year, which predicts "escalating impacts on marine life."

While phytoplankton are relatively resilient and will likely continue to shift territory as the seas warm, the IPCC expects that deteriorating conditions in the oceans will ultimately lead to an overall decline this century.

Average global phytoplankton biomass – a measure of total weight or quantity – is predicted to fall by around 1.8 to 6%, depending on the level of emissions.

But because of its outsized importance, even modest reductions can "amplify up the marine food web," eventually leading to reductions in marine life by roughly 5 to 17%.

There could also be "changes in carbon cycling and carbon sequestration, as our plankton community changes" with smaller plankton potentially drawing down less CO2, says plankton ecologist Abigail McQuatters-Gollop of Plymouth University.

As global leaders prepare to meet at a crucial U.N. summit on climate change, the issue is a stark example of how accelerating human impacts are destabilizing intricate life-sustaining systems.

Tackling this is not as simple as planting trees, McQuatters-Gollop notes.

But fishing sustainably, reducing pollutants and curbing C02 emissions can all help improve ocean health. In the past, she says conservation has focused on "the big things, the cute things, or the things that are directly worth money" – like whales, turtles and cod.

But all rely on plankton.

While this "blindness" could be because they are microscopic, people can see plankton traces at the beach – in foam on waves, or the nighttime twinkle of bioluminescence.

Or on the children's television show "SpongeBob SquarePants," whose character Plankton is "the most famous plankton out there," says McQuatters-Gollop.

And when they "bloom" in vast numbers, plankton are visible from space, turning the water a startling emerald, or creating Van Gogh swirls of milky blue, in seasonal displays critical for ocean life.

But they can have too much of a good thing: The runoff of nitrogen-rich fertilizers is blamed for creating harmful algae blooms, like the glutinous "sea snot" off Turkey's coast this year.

These can poison marine life or choke oxygen out of the water and may be exacerbated by warming, warns the IPCC.

Meanwhile, research published in Nature last month found that iron carried in smoke from huge 2019 and 2020 wildfires in Australia sparked a giant swell of phytoplankton thousands of miles away, which could have sucked up substantial amounts of CO2.

Blooms can be seeded by nutrients from sand storms or volcanic eruptions and it is these "natural processes" that have inspired David King, founder of the Centre for Climate Repair at Cambridge.

King supports a hotly-debated idea to "fertilize" plankton blooms by sprinkling iron on the surface.

The theory is that this would not only help suck up more CO2, but lead to a surge of ocean life, including eventually helping to increase whale populations that have been devastated by hunting.

More whales equals more whale poo, which is full of the nutrients plankton need to bloom, and King hopes could restore a "wonderful circular economy" in the seas.

A pilot project will try the technique in an area of the Arabian Sea carefully sealed off in a "vast plastic bag", but King acknowledges that the idea raises fears of unintended consequences: "We certainly don't want to de-oxygenate the oceans and I'm pretty confident we won't."

Ocean organisms have been photosynthesizing for billions of years – long before land plants. But we still have much to learn about them.

It was only in the 1980s that scientists named the planktonic bacteria prochlorococcus, now thought to be the most abundant photosynthesizer on the planet.

Some "drifters" it turns out can swim, while others are masters of communal living.

Take the partnership between corals and plankton – it is so important that when it breaks due to warming the corals bleach.

Or Acantharea, a single cell shaped like a snowflake that can gather photosynthesizing algae and manipulate them into an energy-generating "battery pack," says Johan Decelle, of the French research institute CNRS and the University of Grenoble Alpes.

They have been "overlooked" because they dissolve in the chemicals used by scientists to preserve samples.

In order to study plankton under a high-resolution electron microscope, Decelle used to collect samples at the French coast and drive for hours back to Grenoble with them in a special cool box.

But this year he worked with the European Molecular Biology Laboratory on a pioneering project bringing high-tech freezing virtually onto the beach.

This enables the study of these delicate organisms as close as possible to their natural environment.

But the value of the survey, which began in 1931 to understand how plankton affected herring stocks, comes from decades of data.

Scientists have used it to look back to track climate changes and it played an important role in the recognition of microplastics.

Ostle used CPR ships' logs to show that "macroplastics" like shopping bags were already in the seas in the 1960s.

By the time it was awarded a Guinness World Record last year for the greatest distance sampled by a marine survey, it had studied the equivalent of 326 circumnavigations of the planet.

From the boat in Plymouth, the water appears calm as sunlight slides across its surface. But every drop is teeming with life.

"There's just a whole galaxy of things going on under there," Ostle says.