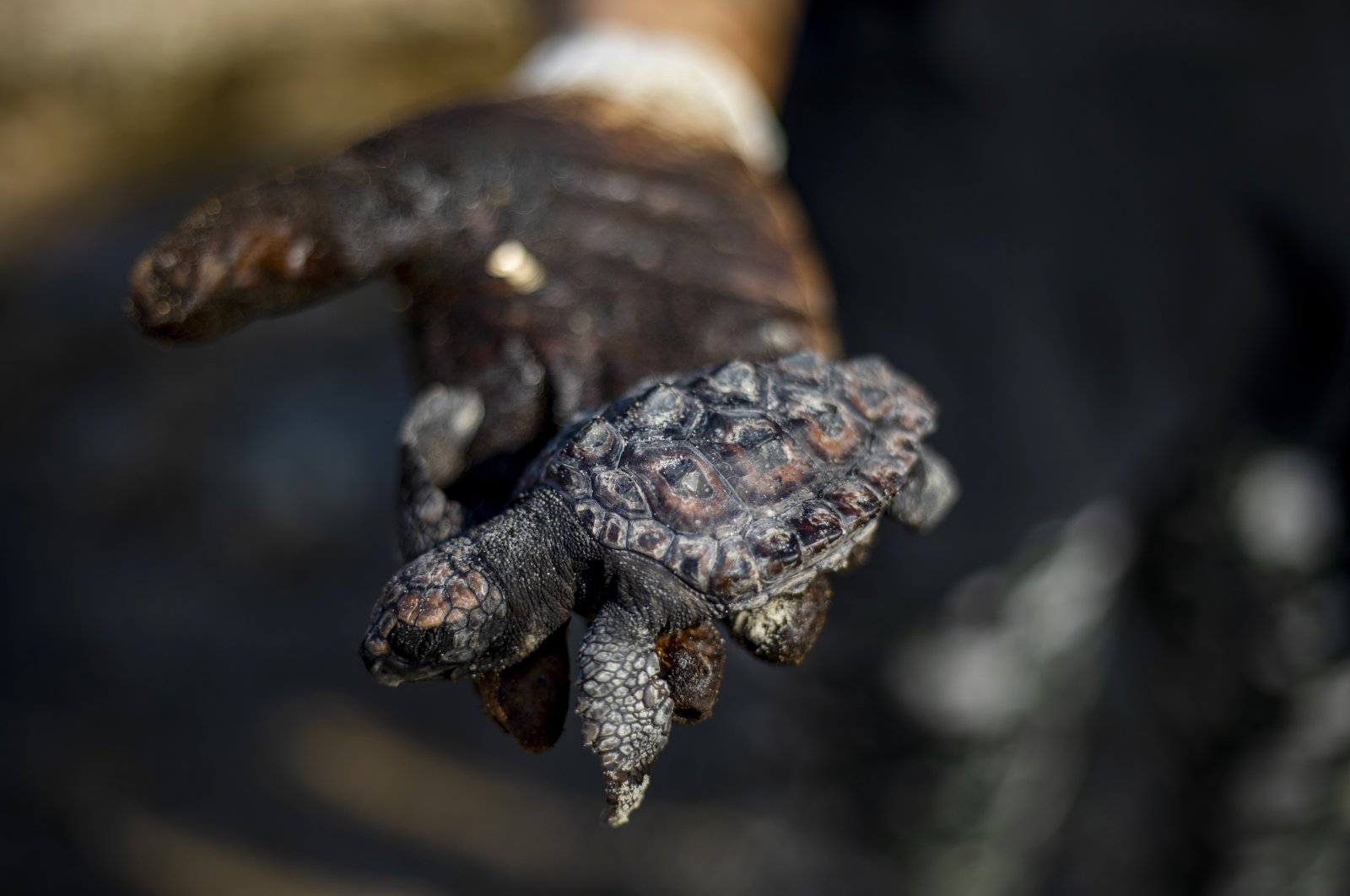 The sandy shores of the Tyre nature reserve on the Mediterranean are home to several endangered turtle species. But after an oil spill off the Israeli coast early last month, beaches in southern Lebanon were also washed away by tar deposits.

“This is a green turtle, an endangered species, they never die so young,” said Hassan Hamze, director of the reserve, holding up a tar-covered 5-year-old turtle in his palm.

Waves carrying tar crashed as far as 70 meters (230 feet) up from the waterline and the damage is not limited to the south, Lebanon’s National Council for Scientific Research said. It added the soft black material has spread from Naqoura, near Israel, all the way up to the beaches in Beirut in the north. Worse still, clumps range between 50 to 0.5 centimeters, too tiny to be filtered out but still capable of spreading pollutants into the sand. Dozens of volunteers have undertaken the painstaking task of cleaning the beaches but are finding it impossible to clear the sand of the tinier tar particles.

The turtles arrive in May, just before tourist season. Environmental activists would start cleaning the beaches of waste at least one month before.

Fatima Jafaar, a science teacher volunteering for Green Southerners, a nongovernmental organization (NGO) that works on environmental issues, told Al-Jazeera that “mother turtles are very picky about where they hatch their eggs."

“If they sense anything wrong, they will turn back to lay eggs in the sea, and we will lose a whole generation of turtles.”

Stating that this year their task is even harder, her team of volunteers has been coming to Al-Bakbook beach every day for the last week. They have only managed to clean 500 meters of the 3-kilometer-long (1.86 miles) beach.

In addition to the fact that the tar particles in the sand are very small, the wind stirring up the sand makes the job more difficult. In the future, we fear that the fields will be melted into the sand by the sun and that the sand will become toxic for generations of turtles, Jafaar said.

Jafaar and other Green Southerners volunteers have collected 400 kilograms (882 pounds) of tar so far, but they are still concerned that it is not enough to protect endangered turtles.

Hamze, the nature reserve's director, demanded an inquiry and said there would always be suspicions that the oil spill might have been caused at an Israeli offshore oil platform.

The mayor of Tyre city, Hassan Dbouk, who is affiliated with a Hezbollah ally, also holds Israel responsible for the oil spill. “It is coming from Palestine,” he said. “It is an accident, but those who occupy Palestine are responsible.”

One of the volunteers, Hassan Sharafeddine, who studied Mechanical Engineering in Iran, blames Israel outright for deliberately causing the environmental disaster. “This is no different from dropping bombs on us,” he said.

However, Israel has been trying to clear its name regarding the environmental disaster. Israel’s environment minister, Gila Gamliel, accused Iran of “environmental terrorism.” She said there was enough evidence to link the oil spill to a Libyan-owned and Syria-bound tanker carrying Iranian crude.