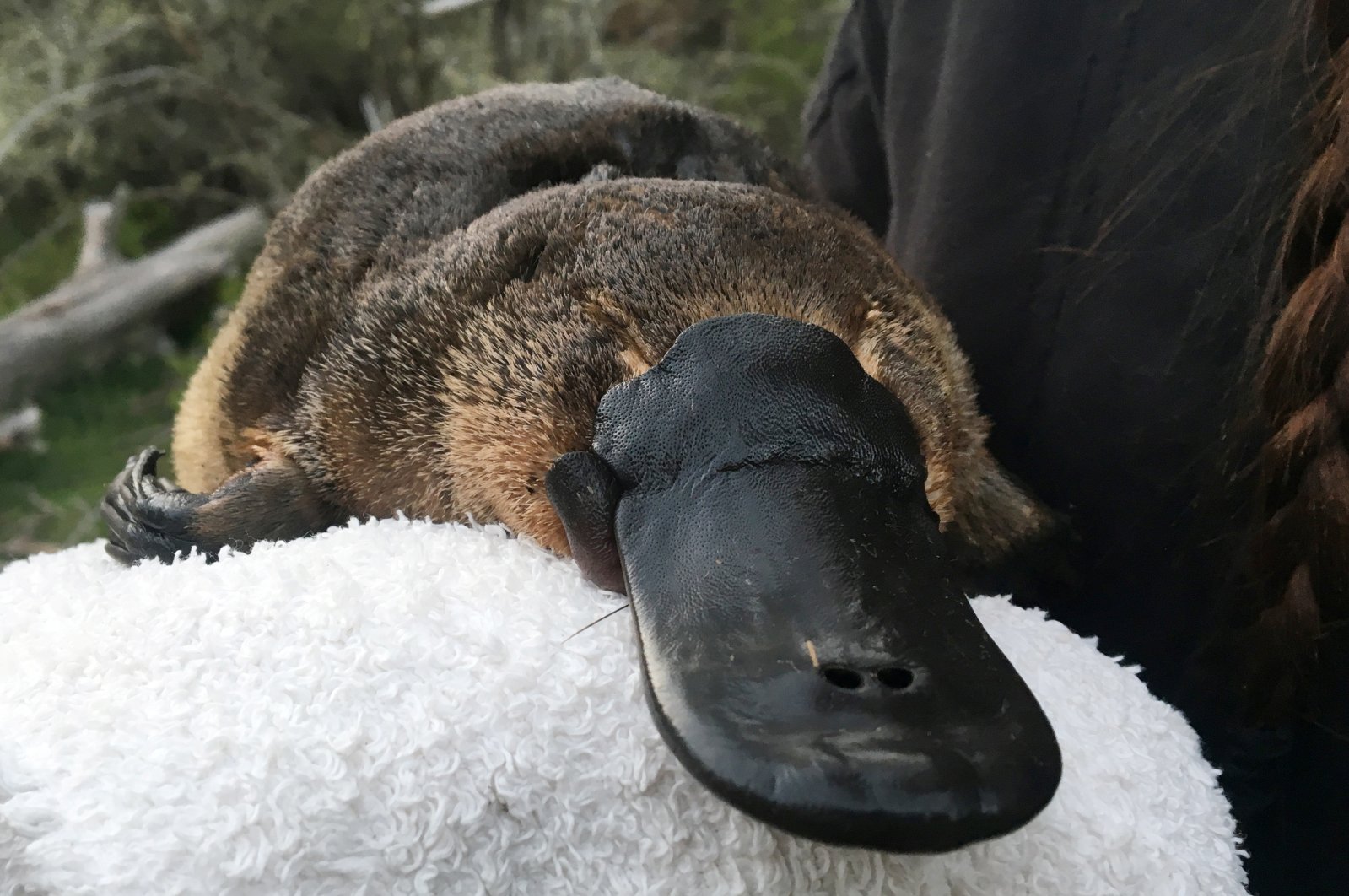 This undated image shows a platypus being surveyed by researchers for the Platypus Conservation Initiative in New South Wales, Australia. (AAP Image/Supplied by UNSW via REUTERS)
by Agencies Nov 24, 2020 10:40 am
Edited By Yasemin Nicola Sakay
RECOMMENDED

Australia's platypus population has declined so drastically in the last 30 years that researchers are calling for the iconic duck-billed mammal to be listed as a "threatened species."

Researchers from the University of New South Wales (UNSW) submitted their recommendation to the New South Wales (NSW) government Monday, off the back of a report which assessed the species' threat of extinction.

The UNSW report found that the beaver-tailed, water-dwelling animal's habitat in eastern Australia had shrunk by up to 22% over the past 30 years. The researchers predict that the populations may have declined by more than 50% as a result of historic land clearing, river regulation, and extreme droughts.

The increased severity and occurrence of bush fires is also likely to have contributed.

"The platypus continues to face ongoing threats across its range. Unsustainable water extraction and land clearing will continue to put pressure on freshwater ecosystems and drive future declines in the future," lead author Gilad Bino said.

"There is a real concern that platypus populations will disappear from some of our rivers without returning, if rivers keep degrading with droughts and dams," said Richard Kingsford, director of the university's Centre for Ecosystem Science.

The animals, unique to Australia, cannot live outside water, and as the continent dries further and people draw more water from rivers, some permanent pools could get even smaller, he added.

The duck-billed animals with webbed feet lay eggs and live mostly across Australia's eastern seaboard, from the far north of Queensland state to the island state of Tasmania, close to rivers and streams whose beds and banks they forage for food.

Platypus numbers may have more than halved over several decades, research models show, but figures are hard to pinpoint as they are secretive, nocturnal animals. Conservation body IUCN estimates between 30,000 and 300,000 lived in Australia in 2016.

Currently, the species is listed as "near threatened" by the International Union for Conservation of Nature, but it is not listed as threatened under Australia's Environment Protection and Biodiversity Conservation (EPBC) Act. Changing its listing would increase the scrutiny placed on developments that might endanger the species and prioritize its monitoring.

"It would also mean an increased focus on what we can do to improve the situation," Richard Kingsford, director of UNSW's Centre for Ecosystem Science, said.

The recommendation was submitted together with the Australian Conservation Foundation, World Wide Fund for Nature-Australia (WWF-Australia ) and Humane Society International.

The combined koala populations of Queensland, NSW and the Australian Capital Territory are currently listed as "vulnerable," which has helped the allocation of resources to the species.

However, environmental experts and activists have been pushing for better legislation and their threat status to be upgraded from vulnerable to endangered. They have warned that koalas will become extinct in NSW – the state worst-affected by the bush fires – before 2050 unless there is "urgent government intervention."

Under the protection package, AU$2 million will go towards an annual national koala audit. The audit will use techniques such as scat monitoring, drones, citizen science and detector dogs.

"For all our focus on koalas, scientists are telling us that there is a serious lack of data about where populations actually are, how they are faring and the best ways to help them recover after the devastating bush fires," Ley said, as cited by national broadcaster ABC.

A report by a committee of the Upper House of NSW parliament found that the recent bush fires that burned more than 5.5 million hectares of land in NSW killed at least 5,000 koalas, while the blazes destroyed almost a quarter of the koala habitat on public land.