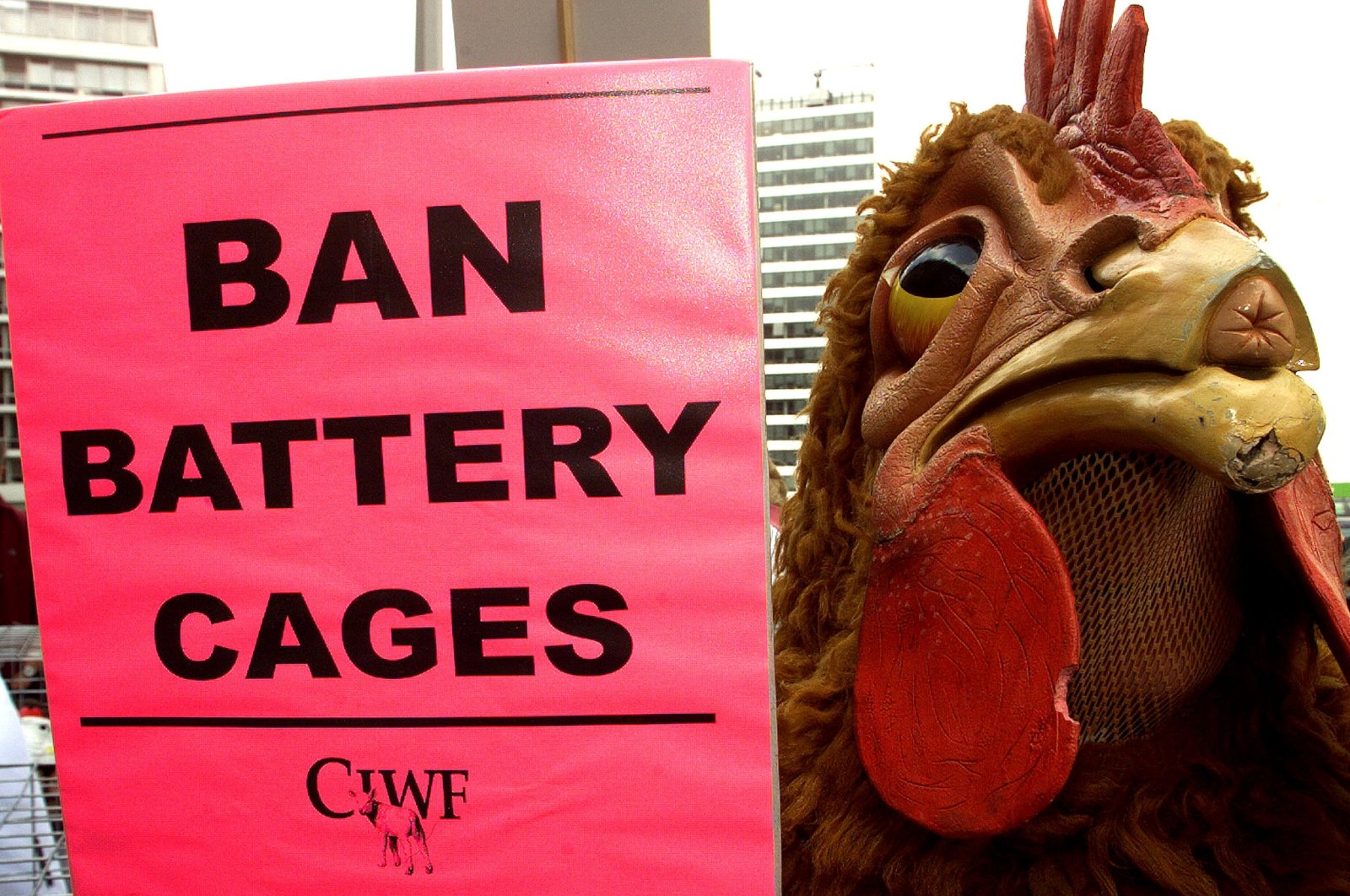 An animal rights activist dressed as a chicken stands in protest outside a meeting of European Union farm ministers in Brussels, Belgium, May 17, 2021. (Reuters File Photo)
by Emre Başaran Oct 25, 2021 8:16 am

Humans are the worst polluters among all animals. Worse still, they are proficient at torture, too. Abusive practices, especially the use of cages in the poultry industry, must end once and for all – even if it seems like a distant dream for now

Must go faster! Renewables on the rise, but not enough for net-zero

First of all, I have to set the record straight: I can totally understand why people become vegetarians and vegans. Their conscience cannot accept large companies irresponsibly slaughtering animals, using them for profit and abusing them for even more financial gain.

I am totally on the same page.

I am not a vegetarian or a vegan myself, but it’s not something I haven’t brainstormed, researched and read on. I just consider consuming responsible amounts of animal-based food a necessity for a balanced diet in humans, which have evolved over thousands of years accustomed to eating meat, drinking milk and so on. I am staunchly against the use of fur and all other unnecessary animal products in daily life; as I reiterated, I only consider consuming animal-based food as an obligation, a necessity for human health, as agreed upon by many scientists.

But that’s a very long and contentious subject; and I don’t want to attract any reaction from my vegan fellows; I want them to know that I totally respect their point of view, and I completely understand where they’re coming from.

And when it comes to animal welfare, we are totally on the same page.

Recently, I conducted an interview with the Cage-Free Turkey initiative’s Dr. Engin Arıkan, who is an animal welfare activist focusing on eradicating the battery cage system from poultry.

Here’s what he had to say.

“(The) egg industry is one of the worst cases of animal exploitation and torture,” Arıkan said after a brief introduction of his group’s aims.

“Why does the egg industry use battery cages and not set them free? Because when they don’t move, forage cost drops and fewer people are required. Three to five people can easily run a facility that houses 100,000 hens this way,” he added.

“Hens cannot spread their wings easily, they cannot step on the soil for 1.5 years.”

The activist also underlined that it’s not just about the costs but also about the egg output volume, because caged hens tend to lay more eggs.

Arıkan also said that their initiative has realistic aims and that they are “aware that we cannot change consumption habits of an entire nation, and that the egg industry will directly say no to our proposals.”

“Instead, we are focusing on businesses that buy eggs, such as hotels, to serve their customers. There is a price difference between caged and free-range eggs but it’s not astronomical,” he said, adding that many hotels have given written pledges to go fully cage-free by 2024.

“Because of the increasing value of (U.S.) dollar against the lira, forage costs have increased too. Eggs obtained from caged layer hens sell for TL 1 ($0.1) apiece and free-range eggs sell for TL 1.3 ($0.13),” he said.

Arıkan also emphasized that an overwhelming majority of Turks, roughly over 75%, are found in favor of banning battery cage systems altogether via surveys conducted by established research firms such as KONDA.

“When we tell the people that we want layer hens to at least live in coops with nesting-boxes instead of battery cages, an overwhelming majority of them were in favor,” he said.

The activist also underlined that countries with economic situations similar to Turkey have adopted reforms to improve animal welfare.

“When you look at it, the situation is improving in Turkey. Many businesses have given pledges. For example, the Metro supermarkets have pledged to go fully cage-free, and their annual purchase of eggs equals 100 million eggs,” he said.

“Even a pledge by a single company can change much.”

Arıkan also pointed to the “Egg Tracking Report” prepared by Cage-Free Turkey, which details which companies have pledged to go fully cage-free and which have not.

“When you look at it, you can see that many respected companies have pledged to go fully cage-free,” he said.

“But on the other side of the coin, many established and corporate firms have not pledged yet,” Arıkan added.

I took a look at the report and what I discovered is just sad, to say the least.

Many well-recognized brands such as Tchibo, Caribou Coffee, Caffe Nero, Burger King, Kempinski Hotels, KFC, Krispy Kreme, IKEA, the Marmara Hotels, Wyndham and others have pledged to go fully cage-free, but some other highly prominent firms such as McDonald’s, Rixos Hotels, Starbucks, Subway, Ülker, Torku and Pınar have not pledged yet.

Dr. Arıkan also enlightened me on what those numbers mean that we are so accustomed to seeing printed on eggs.

“The first number you see on the eggs matters,” he said.

“If that number is three, we have to stay away from it because it indicates a caged egg,” Arıkan added.

“If it’s two, then it means it’s an egg from a hen living in a coop. If one, then it’s free-range,” he underlined.

“If it’s zero, then it means the egg is both free-range and that the hen that produced it has been fed totally organically.”

“Turkey is in full sync with the European Union in this classification system,” he said, adding that the exact same numbering is used in EU countries.

I later went on to ask Dr. Arıkan what the egg titans – or “Big Egg,” as I casually call them in reference to “Big Tobacco” and “Big Pharma” – actually have in their plans.

“I see those titans also selling eggs labeled ‘free-range.’ Do they want to have a share from both ends of the spectrum? Do they want to sell free-range eggs for higher prices while also maintaining their grip on mass-produced, caged eggs?” I asked him.

“As a matter of fact, the titans that you’re referring to, they are most concerned with the prices,” he said. What a surprise, eh?

“They say that they can switch to the free-range system but they insist that their expenses are covered,” he said.

“The egg market in Turkey is pretty saturated right now. There is an oversupply.”

“Honestly, big producers are not animal haters or something, I am pretty sure they would happily bring reforms if their expenses are covered,” he added.

“Just a pledge from a mammoth company such as Metro supermarkets can relieve the concerns of egg producers. If more brands pledge, the situation surrounding the welfare of layer hens will improve.”

Situation in Turkey and EU

Arıkan also added that only a few years ago, caged eggs made up 95% of the market, but that figure has dropped to 80% in only three years thanks to the reforms by Turkish state institutions and animal welfare organizations’ efforts.

I asked him if the EU has considered banning the battery cage system.

“Even though it remains legal now, there is a proposition in the European Parliament that calls for banning caged systems,” he said.

“Nearly every retail store in Europe has pledged to go fully cage-free. Even though the bill has not been passed, the ratio of caged eggs will not be greater than 20% in Europe by 2025,” Arıkan added.

The activist also underlined that Turkey is striving harder to increase the number of cage-free facilities.

Later on, I asked Dr. Arıkan how realistic a goal it was to go completely cage-free in a country with 120 million layer hens.

“As you said, if we tried to go completely cage-free with all those 120 million hens, we would have to allocate a whole region of Turkey to egg production, and unfortunately, that’s not realistic,” he said.

“The interim remedy is the coop system. Many hens can be kept together in coops where they can step on the soil, roost and walk,” Arıkan added.

“If you ask me how big a difference that would make, let me tell you, even just switching from battery cage systems to the coop system, the difference is huge for those animals.”

Dr. Arıkan also said that there is a metric for how well a hen is kept, and that battery cage systems have a score of zero, while the coop system has a score of 5.6, a very significant markup.

“Imagine someone starving in Africa, and another person trying to live on a minimum wage in Turkey,” Arıkan said. “They will not be rich or anything but it will be a substantial rise in welfare.”

Later on, I asked him whether relevant Turkish state institutions such as the Ministry of Agriculture and Forestry are working as hard as they should to achieve better animal welfare in Turkey.

“I would also want the ministry to be proactive and force producers to have more humane ways of egg production,” he said.

“Nevertheless, we should not be utopists. When you look at the situation in Europe, you can see that in no country have those necessary reforms been realized only by the ministries’ initiatives,” Arıkan added, underlining that general cooperation between producers, state institutions, brands that use eggs in their services and consumers is necessary.

“Personally, I don’t expect the ministry to impose top-down reforms amid all the economic difficulties Turkey is facing right now,” he said.

Praising the ministry’s efforts to encourage free-range egg production, such as incentives provided to smaller producers, Arıkan added that the government should take matters into its hands after significant progress is made.

“After the ratio of free-range eggs hits, for example, 70%, then the ministry should go on to announce regulations for the remaining 30%.”

“Neither Turkey nor other countries have enough regulations to achieve complete welfare for layer hens right now,” he concluded, adding that efforts should be intensified worldwide.

That's my two cents and contribution as a journalist to improving the welfare of layer hens, I now leave the rest up to the government, egg producers and brands to better the situation by the day. Nevertheless, maybe the most effective way to fight abuse against hens is to boycott eggs that have the number three printed on them to show "Big Egg" that we as consumers mean business.

Must go faster! Renewables on the rise, but not enough for net-zero