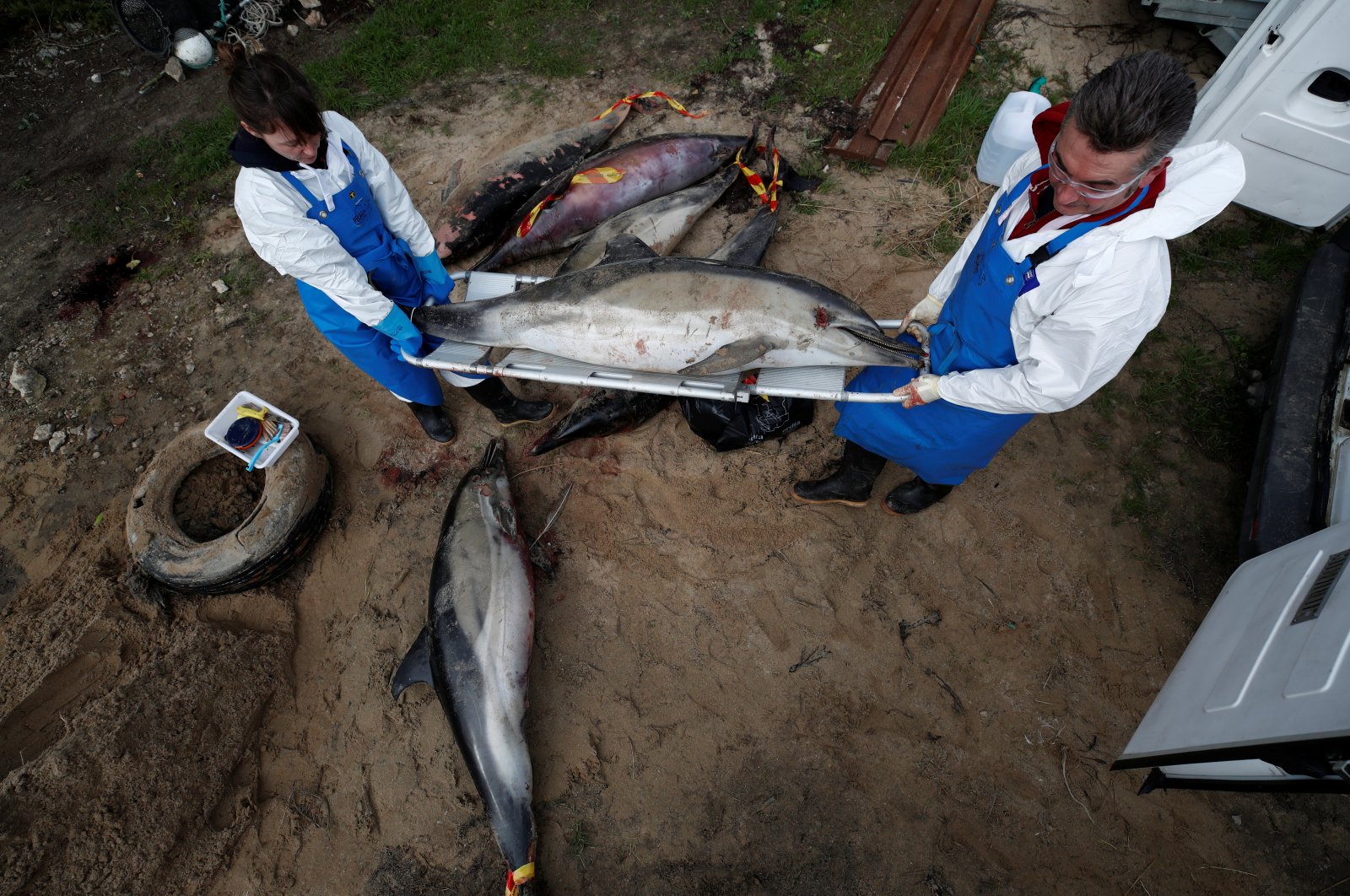 Experts at the Observatoire Pelagis conducting scientific autopsies at municipal technical services in Barbatre on Noirmoutier Island carry a dolphin that was found dead on a beach, France, Feb. 11, 2020. (Reuters Photo)
by REUTERS Jun 26, 2020 12:25 pm
RECOMMENDED

Dead dolphins are washing up on France's Atlantic coast in such high numbers that local populations of the mammals are at risk, marine biologists say.

The overwhelming majority drowned in the nets of fishing trawlers. Post mortems often show fractures, broken tails and flippers and deep incisions cut into their skin by the nets. Some have been mutilated as fishermen release their bodies.

"We're reaching mortality rates that threaten the survival of the dolphin population in the Bay of Gascony," said Morgane Perri, a marine biologist in Brittany, western France.

"For the last three years, we've seen more than 1,000 deaths (of dolphins and porpoises) over a four-month period each winter."

Common dolphins are the hardest hit. Scientists believe those found on beaches represent a small fraction of the total number dying in fishing nets off the coast of France. The real number is likely to be five to 10 times higher, they estimate.

Dolphins have for decades been caught in fishing nets in the Atlantic waters off Western Europe. But marine scientists say the spike in numbers in recent years is a result of shifting fishing practices, and in particular, the fishing vessels that trawl in pairs for sea bass.

The National Committee of Maritime Fishermen did not immediately respond to a request for comment.

The slow reproduction rates of dolphins, mammals that need to surface to breathe, means they are particularly vulnerable to sharp falls in numbers, according to the Pelagis Observatory in La Rochelle.

Population models show numbers are stable, said Helene Peltier, a researcher at the observatory. "But once you see the decline, it's too late."

Activist group Sea Shepherd wants trawlers to be banned from fishing in sea bass spawning grounds and better monitoring of fisheries. Acoustic 'pingers' designed to repel dolphins are also being trialed on some fishing boats.

"There is no single miracle solution," Peltier said.