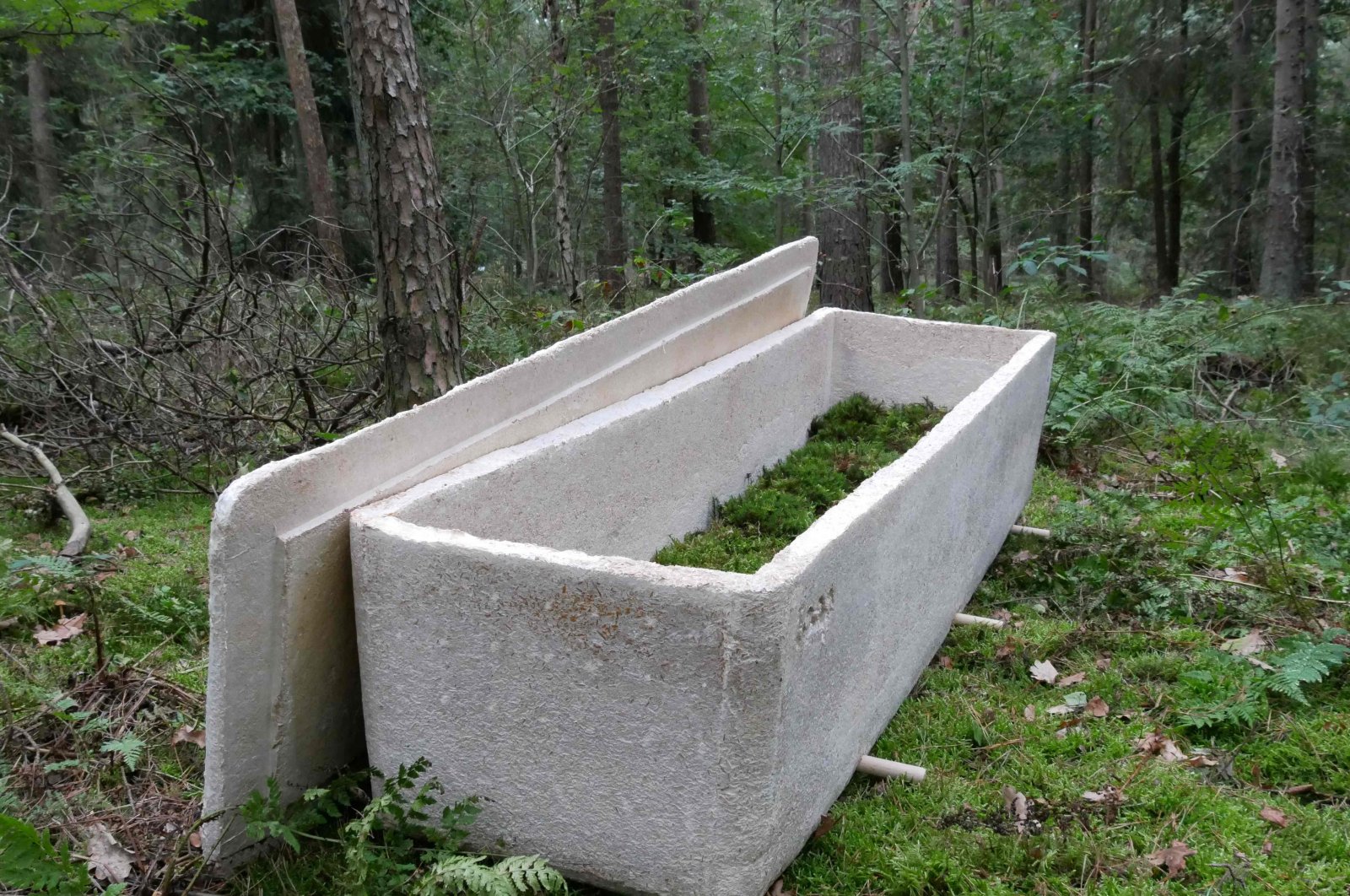 This handout picture released by the biotech company Loop shows the "living cocoon," a coffin made from mycelium which allows a fast-composting of the body, Sept. 15, 2020. (AFP Photo)
by French Press Agency - AFP Sep 17, 2020 11:25 am
Edited By Yasemin Nicola Sakay
RECOMMENDED

In the Netherlands, you can keep helping the planet after you die – by opting for a living coffin made of mushrooms which speeds up the decomposition of your body. The coffin turns corpses into compost that enriches the soil thanks to mycelium, the root structure of fungi.

The "Living Cocoon" is a world first, according to Bob Hendrikx, who invented the idea in his student laboratory at Delft Technical University.

"This is the world's first living coffin, and actually last Saturday the first human being in the Netherlands was composted and returned into the cycle of life," he told Agence France-Presse (AFP).

The coffin was the final resting place for an 82-year-old woman, whose body will decompose within two to three years. If a traditional coffin with varnished wood and metal handles is used, the process normally takes more than 10 years. The casket itself will meanwhile disappear within 30 to 45 days.

"It's actually an organism, so it's made from mycelium which is the root structure of mushrooms," Hendrikx said. "They're the biggest recyclers in nature".

"This is the most natural way to do it ... we no longer pollute the environment with toxins in our body and all the stuff that goes into the coffins but actually try to enrich it and really be compost for nature."

The coffin is the same size and shape as a classic coffin, but its pale color is typical of mycelium. Inside is a bed of moss where the body – and various insects and other soil creatures – will lie.

Overall the coffin is much lighter than a wooden casket. It's also cheaper, currently costing around 1,500 euros ($1,770).

Making the coffins requires a bit of foraging, first for moss from the forest, then collecting mycelium from mushrooms, and then mixing that with woodchips.

"Slowly in seven days, it's actually pretty fast, it will grow into a solid material that is actually an organism," said Hendrikx.

"Afterwards it's naturally dried by literally removing the mold and just letting it be. So then the mycelium, the organism, becomes inactive.

"When it's in the ground, it starts to get activated again when a lot of moisture hits the organism. Then it starts the decomposition process."

Hendrikx's inspiration didn't stem from a ghoulish fascination with bodies or human compost but from serendipity. Fascinated by the applications of mushrooms, he first tried to make a "living house" for his thesis.

But when someone asked what would happen with the body of his grandmother if he left her inside the house, Hendrikx had a brainwave. That has now become a start-up, called Loop, which has signed a deal with a funeral home, while also causing a stir on social media.

"Looking at the reactions we had online, we're pretty sure it's going to be a big hit," he said.