Slaughter of dolphins in Faroe Islands casts shadow over tradition 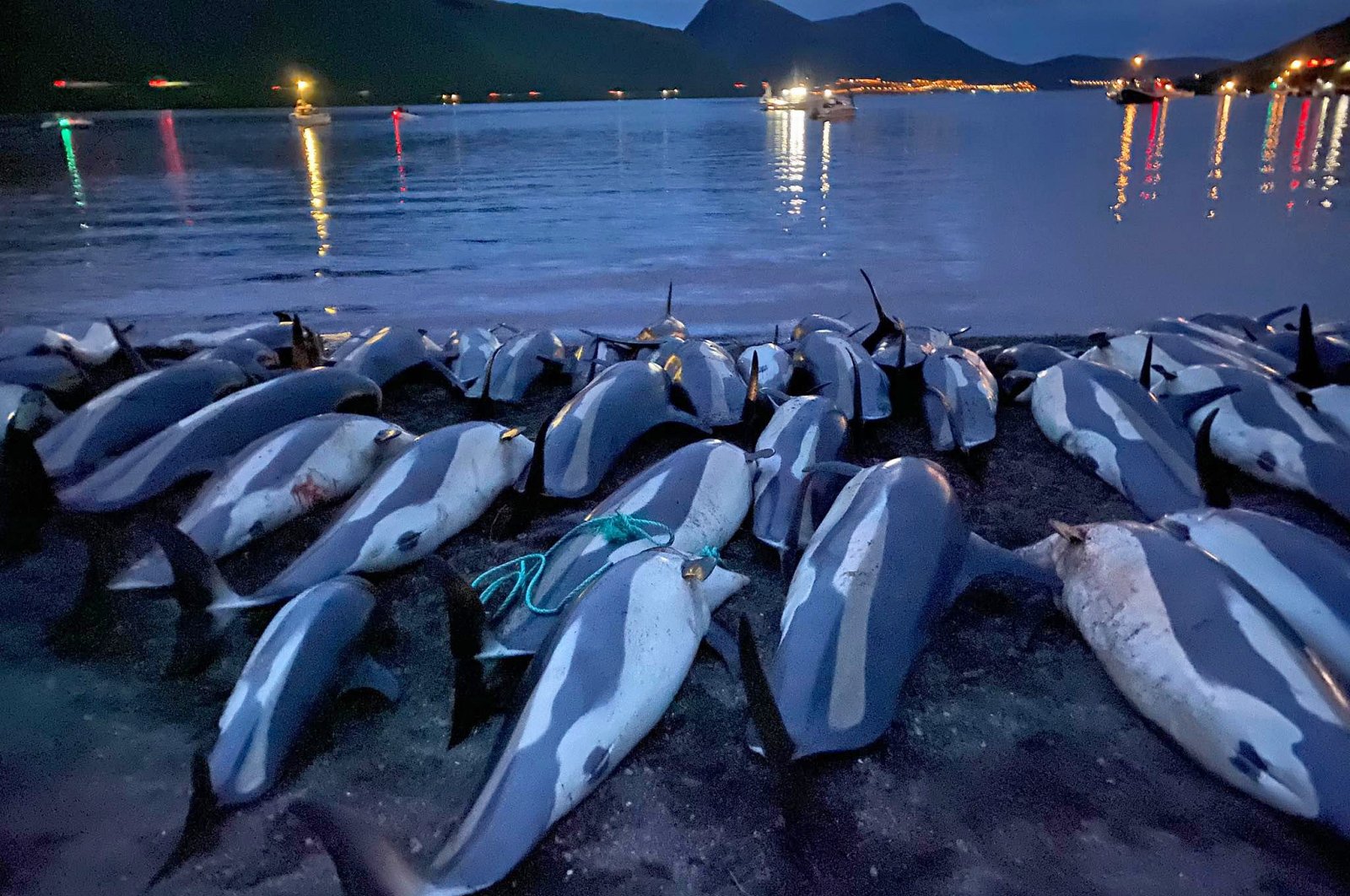 The carcasses of dead white-sided dolphins lie on a beach after being pulled from the blood-stained water on the island of Eysturoy, part of the Faroe Islands, Sept. 12, 2021. (Sea Shepherd via AP)
by French Press Agency - AFP Sep 20, 2021 9:29 am

A long-held tradition or a mass-murder? The killing of 1,428 dolphins in one day in the Faroe Islands sparks fierce criticism abroad

Every summer in the Faroe Islands, hundreds of pilot whales and dolphins are slaughtered in drive hunts known as the "grind" that residents defend as a long-held tradition.

The hunt always sparks fierce criticism abroad, but never so much as last week when a particularly bountiful catch saw 1,428 dolphins massacred in one day, raising questions on the island itself about a practice that activists have long deemed cruel.

Images of hundreds upon hundreds of dolphins lined up on the sand, some of them hacked up by what appeared to be propellers, the water red with blood, shocked some of the staunchest supporters of the "grind" and raised concern in the archipelago's crucial fishing industry.

For the first time, the local government of the autonomous Danish archipelago located in the depths of the North Atlantic said it would re-evaluate regulations surrounding the killing of dolphins specifically, without considering an outright ban on the tradition.

"I had never seen anything like it before. This is the biggest catch in the Faroes," Jens Mortan Rasmussen, one of the hunter-fishermen present at the scene in the village of Skala, told AFP.

While used to criticism, he said this time round it was "a little different."

"Fish exporters are getting quite a lot of furious phone calls from their clients and the salmon industry has NOW mobilized against dolphin-hunting. It's a first."

The meat of pilot whales and dolphins is only eaten by the fishermen themselves, but there is concern that news of the massacre will hit the reputation of an archipelago that relies considerably on exporting other fish, including salmon.

Traditionally, the Faroe Islands – which have a population of 50,000 – hunt pilot whales in a practice known as "grindadrap," or the "grind."

Hunters first surround the whales with a wide semi-circle of fishing boats and then drive them into a bay to be beached and slaughtered by fishermen on the beach.

Normally, around 600 pilot whales are hunted every year in this way, while fewer dolphins also get caught.

Defending the hunt, the Faroese point to the abundance of whales, dolphins and porpoises in their waters (over 100,000, or two per capita).

They see it as an open-air slaughterhouse that isn't that different to the millions of animals killed behind closed doors all over the world, said Vincent Kelner, the director of a documentary on the "grind."

And it's of historical significance for the Faroe Islanders: without this meat from the sea, their people would have disappeared.

But still, on Sept. 12, the magnitude of the catch in the large fjord came as a shock as fishermen targeted a particularly big school of dolphins.

The sheer number of the mammals that beached slowed down the slaughter, which "lasted a lot longer than a normal grind," said Rasmussen.

"When the dolphins reach the beach, it's very difficult to send them back to sea, they tend to always return to the beach."

Kelner said the fishermen were "overwhelmed."

"It hits their pride because it questions the professionalism they wanted to put in place," he added.

While defending the practice as sustainable, Bardur a Steig Nielsen, the archipelago's prime minister, said Thursday the government would re-evaluate "dolphin hunts, and what part they should play in Faroese society."

Critics say that the Faroese can no longer put forward the argument of sustenance when killing whales and dolphins.

"For such a hunt to take place in 2021 in a very wealthy European island community ... with no need or use for such a vast quantity of contaminated meat is outrageous," said Rob Read, chief operating officer at marine conservation NGO Sea Shepherd, referring to high levels of mercury in dolphin meat.

"The Grind foreman for the district was never informed and therefore never authorized the hunt," it said in a statement.

It also claims that many participants had no license, "which is required in the Faroe Islands, since it involves specific training in how to quickly kill the pilot whales and dolphins."

And "photos show many of the dolphins had been run over by motorboats, essentially hacked by propellers, which would have resulted in a slow and painful death."

Faroese journalist Hallur av Rana said that while a large majority of islanders defend the "grind" itself, 53% are opposed to killing dolphins.