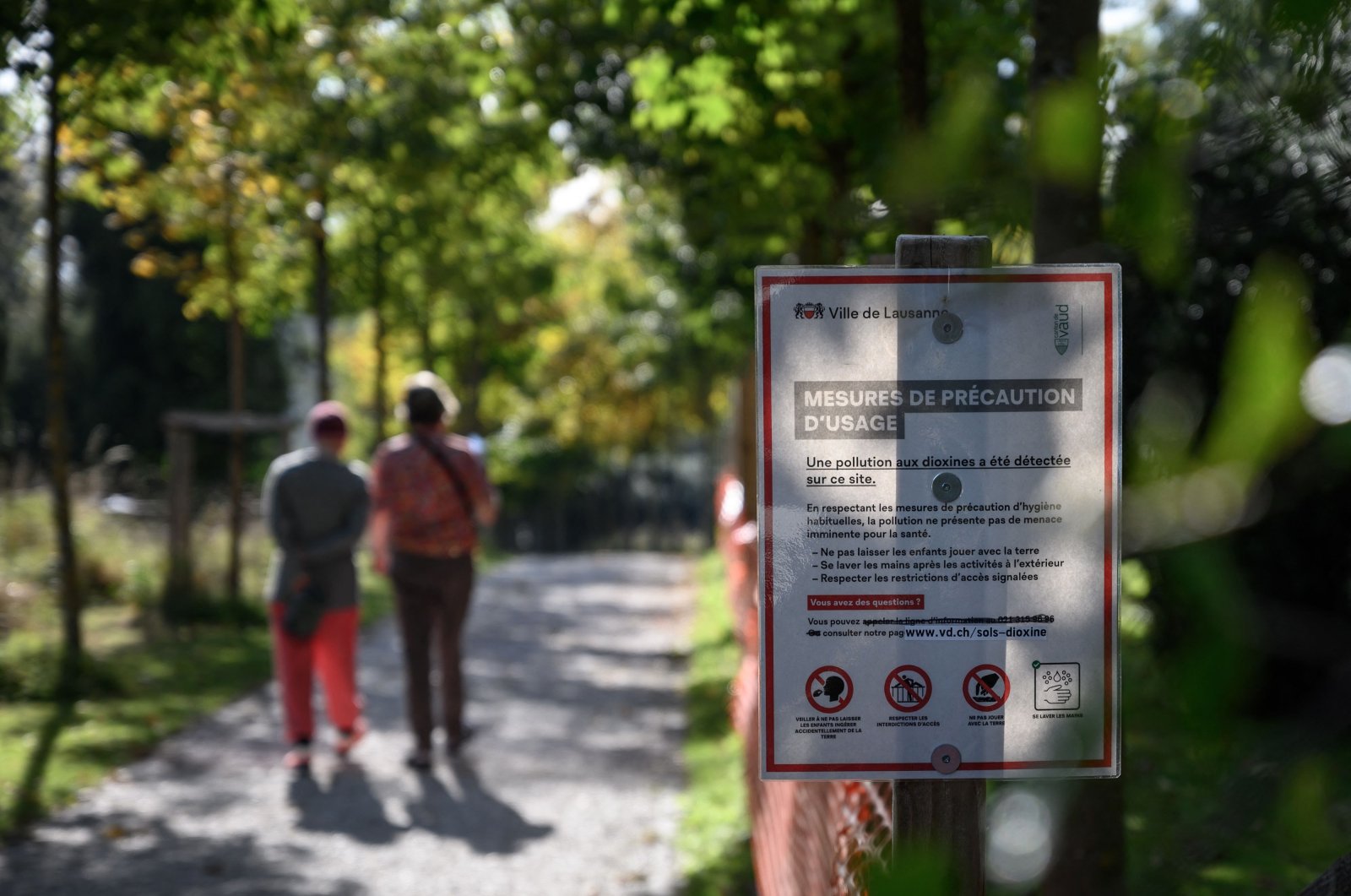 A warning board next to the dioxin-polluted playground of la Sallaz surrounded by orange fences in Lausanne, Switzerland, Oct. 15, 2021. (AFP Photo)
by French Press Agency - AFP Oct 16, 2021 11:55 am
RECOMMENDED

The Swiss city of Lausanne, the country's fourth-largest city and serving as a host for a number of international sports bodies, is currently trying to cope with the effects of a recent discovery of wide-scale soil pollution caused by toxic compounds from an old garbage incinerator.

The situation, which has troubling implications for children and those who eat home-grown food, is unprecedented in the wealthy Alpine nation, which prides itself on its pristine mountains, lakes and pastures.

A domestic waste incineration plant, closed since 2005, is being blamed for the dioxin fall-out. Dioxins, which belong to the so-called 'dirty dozen' dangerous chemicals known as persistent organic pollutants, have the potential to be highly toxic. They have been shown to affect several organs and systems.

The problem was discovered by sheer chance between January and May this year at a planned new ecological allotment in the capital of Olympic sport overlooking Lake Geneva. For years, pollution monitoring had focused on air and water.

"As we did not look for dioxins, we never found them," Natacha Litzistorf, the city councilor for the environment, told Agence France-Presse (AFP). The discovery triggered soil analysis measurements at 126 sites across the city. Experts also looked at the risks associated with exposure to polluted soils.

This week Lausanne announced that those studies found the dioxin levels – and the expanse of the affected area – were much worse than previously thought.

The city has issued a map showing four concentric rings, with zones containing concentrations in the soil of 20-50 nanograms (ng) per kilogram, 50-100, 100-200 and then above 200 in the middle. A peak of 640 was recorded in the city center.

The affected zone stretches 5.25 kilometers (3.2 miles) inland and measures around 3.6 kilometers across.

In all the affected zones, people should not eat chickens raised on the soil, offer or sell eggs from such chickens, while only those in the 20-50 zone can eat their eggs – though just one per week.

Parents must also stop infants aged under four from ingesting soil, for example by touching their mouths after playing on the ground. Warning signs have been installed around the city's parks and playgrounds.

The concentric circles appear to lead to only one source. "We quickly suspected the cause was linked to a former incinerator," Litzistorf said.

The Vallon plant opened in 1958 and was initially welcomed as a way of dealing with the city's garbage. "At the time, it was thought much better to site waste incinerators in the city center to protect agriculture in the countryside," Litzistorf explained. The dioxin pollution dates from 1958 to 1982, when the Vallon filters were upgraded to environmental norms.

Didier Burgi, who owns a vegetable garden plot, said the discovery had sparked questions among veteran home growers. "We are not going to eat the squashes. We don't have a lot of them, but there was specific information about them and we're not going to tempt the devil," he told AFP.

The major Chatelard allotment, by the new football stadium on the edge of the city, heard Thursday that it had readings under 20 ng. Plot holder Jose Torres compared his imperfect tomatoes to the flawless ones in supermarkets. "Everything you buy is full of chemicals," he said. "From my plot, I know what I'm eating."

Jacqueline Felder, tilling her beans, spinach, lettuce and carrots in the afternoon sunshine, said: "I've been growing vegetables for 15 years. We are not worried. People are afraid of everything these days. The Earth is our mother. Respect it."

The World Health Organization (WHO) says short-term exposure to high levels of dioxins may result in skin lesions, such as chloracne and patchy darkening of the skin, and altered liver function. Long-term exposure is linked to impairment of the immune system, the developing nervous system, the endocrine system and reproductive functions.

Litzistorf said she was not aware of anyone coming forward with physical conditions linked to dioxin pollution. But the question of potential liability remains unresolved, as does the issue of what to do next, as the dioxin hunt expands.

Whether the soil can be cleaned up, on such a wide scale, "is the question that everyone is asking", said Litzistorf – along with who should do it, how, and how much it might cost.