Watch out, it's wildfire season: What to do in a fire in Turkey 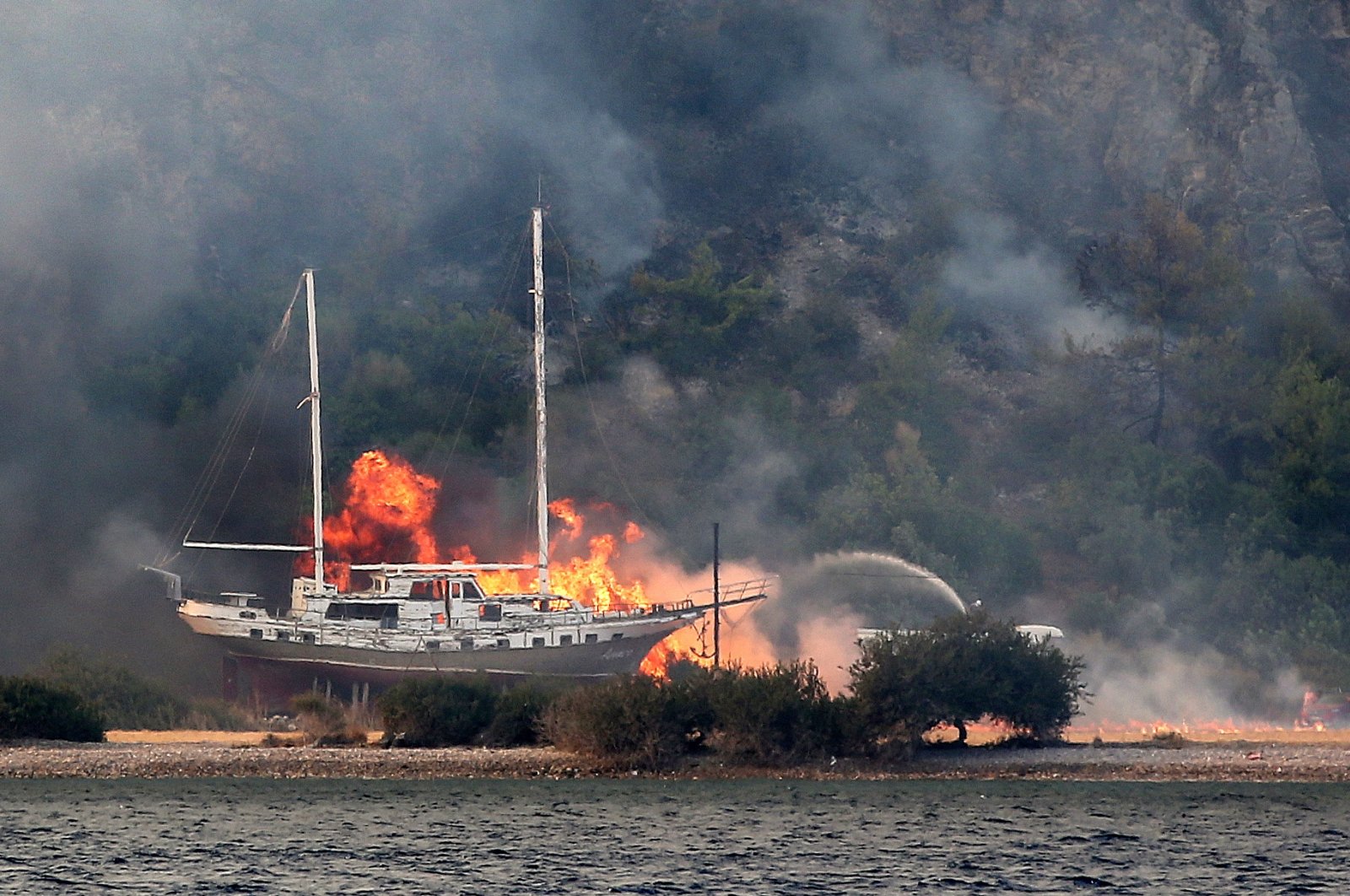 Firefighters battle to extinguish flames netx to a boat during the wildfires at the Milas district of Mugla, Turkey, 02 August 2021. (EPA Photo)
by Leyla Yvonne Ergil Aug 03, 2021 8:06 am

Turkey was hit hard last week by deadly forest fires that were fueled by high temperatures and strong winds. We now know fires of this caliber can transpire nearly anywhere in the world, but it is important for those in Turkey to know what to do when it happens here

As anyone remotely interested in Turkey will know, last week the country suffered from scores of catastrophic wildfires that forced evacuations from villages and even hotels. Fires erupted in Antalya’s Manavgat, Bodrum, Marmaris, Ortaca, Datça, Adana and the list goes on. The ramifications of the damage caused by the fires this week is yet to be tallied, but in just a few days 80 hectares (nearly 200 acres) had burned down in Bodrum, there was one death and 27 homes and a factory turned to dust in Marmaris, and in Manavgat, which had to evacuate 18 villages, at least eight people lost their lives as dozens more are still receiving treatment. While we have gotten used to witnessing fires ravage countries and our loved ones abroad, this time the violent wake of the spread of wildfires is in our own backyard and thus it is important to be prepared for such instances and to know what to do if it happens to you!

I recently wrote about a fire that destroyed my decked-out terrace in Istanbul, which I suspect was due to a lit cigarette landing on the cushioning or fabrics I had hanging to shield the sun. However, what I failed to mention is that I actually experienced an even more ravaging fire that I literally had to try and put out alongside many members of my neighborhood that if not extinguished could have been catastrophic. This was a wildfire that quickly spread throughout a field of weeds and trees that lined my home in Bodrum’s beloved Gümüşlük area. One of the last natural spots left in the center of town, how the fire started is unknown; however, there was talk of children playing with firecrackers amongst the weeds.

The scariest and most important fact about a fire is that unlike thunder or lightning or even an earthquake, it comes with no warning and is eerily silent. I learned this as I was sitting at my desk working on my computer with the music on late one evening with the curtains understandably closed. If it hadn’t been for my upstairs neighbor who noticed the flames when he went out on the terrace for a smoke, I really don’t know how I would have ever known there was a fire meters away from my home before it would have been engulfed in flames.

When I pushed aside the curtain to look all I saw was orange light. My neighbor had already begun loading up his car with his most valued items, including his computer and television as I scrambled to locate my cat and dog and secure them in the car for the time being. When I opened the door, neighbors had already begun to arrive and brought buckets and hoses and were watering down the fence, trees and grass belonging to my home, which was the primary one in danger.

The smoke made it very difficult to see, never mind breathe and so we immediately closed all of the windows and doors to secure any clean air available. I immediately called the fire department, who asked that we clear the area of cars so they could have easy access. With the pets in tow, I jumped in my car and drove off down the street to provide space for the firefighters to do their job. But the throngs of people on the street that ran to the fire to attempt to help were unlike anything I could have imagined. My neighbors next door immediately hooked up a hose to their pool and pumped out the water onto the burning field. I parked with a viewpoint of the fire and watched as everyone drove off in their cars to empty out the street. The firefighters arrived and in half an hour the entire incident was over with the exception of the blackened field of burned trees that have since remained in plain sight, serving as a constant reminder.

Keep in mind that as the fires are ravaging multiple spots along Turkey’s southern coast, many entertainment events have been canceled in solidarity and respect for the victims of the devastation. To expats or visitors to Turkey, this may seem foreign, but here in this country, the people find it hard to celebrate and have fun while others and the country itself are suffering.

The decision to restrict access to forested areas for the next fortnight or month has also been made by a number of municipalities including Istanbul, Bursa, Çanakkale, Izmir and Gaziantep.

What to do in the case of a fire in Turkey

AKUT, Turkey’s Search and Rescue Association, recently released a series of instructions on what to do when you are faced with a fire. The primary course of action when witnessing a fire is to immediately alert those in the nearby surroundings by yelling, sounding off an alarm and immediately dialing 112, which is now the centralized number in Turkey for all emergency services, including the fire department. AKUT strongly advises against attempting to put out a fire that is out of control and to instead make sure you safely clear the area to make space for firefighters.

In the case of a fire coming near a residence or place of business, never use an elevator. Make sure to not open any windows as air circulation could instantly increase and even ignite flames and you want to protect any good quality air you have. If you have to contend with smoke, then cover your nose and mouth with a wet cloth and crawl to lower your body as close to the ground as possible since heat rises. Before opening any doors, AKUT advises to run the top side of your hand against it from top to bottom to check for any heat spots coming from the other side. If heat is resonating through the door, then the directive is to try to wet it with damp towels or block the door with something to further obstruct any potential flames. AKUT also reminds us to “stop, drop, rock and roll,” which was how it was taught to us in the U.S. in which you drop and roll on the ground; however, their advice is to try to first wrap yourself in a blanket if possible.

Where to find updates and how to help

AFAD, which is short for the Ministry of Interior’s Disaster and Emergency Management Authority, oversees all governmental efforts in natural disasters. On its website, there are constant updates on the ongoing wildfires as well as a search engine and map of all emergency gathering spots in the country. They also have a volunteer program that they provide training for. The Ministry of Agriculture and Forestry website, at ogm.gov.tr, has a regularly updated list of the recent fires and denotes whether they are under control or still active. AKUT is also providing updates on the fires and offers the opportunity to volunteer in rescue efforts. Turkey’s Red Crescent, Kızılay, is also assisting victims and accepting donations.

Founded by none other than Turkish rock star Haluk Levent, Ahbap.org is a website that aims to connect those in need with those who can help. In the wake of the wildfires, they have set up a map that has designating points of hotels offering to host those affected by the fire. There is also a form you can submit if you would like to volunteer a vehicle to help with evacuation efforts.

On Friday, July 30, the Turkish Foundation for Combating Soil Erosion for the Reforestation and Protection of Natural Habitats (TEMA) launched a campaign to collect donations for the replanting of trees in areas devastated by the fire. Donation accounts have been opened for each individual province affected by the fires. TEMA is an organization that also takes volunteers.

The animal rights federation HAYTAP has offered to bear the costs of treatment for any injured animals in the fires in Antalya and Adana and they are also accepting donations. Meanwhile, the Marmaris Municipality has also announced that any animals harmed by the fires will be treated free of cost by the district’s veterinarians, and that includes turtles, porcupines and birds. In Bodrum, the Yücelen Hayvan Hastanesi, which is a veterinary hospital, has also opened its doors 24/7 for any animals that have been affected. There have also been posts in expat Facebook groups of at least one volunteer that was searching scorched areas for animals.

Calls from a number of municipalities have gone out for emergency supplies, such as batteries, water and ayran (a refreshing yogurt drink whose saltiness is ideal for replenishing electrolytes), and many have established collection points so you can check with your local officials should you choose to contribute.