What? How? Why? 5 things to know about Turkey's 'sea snot' 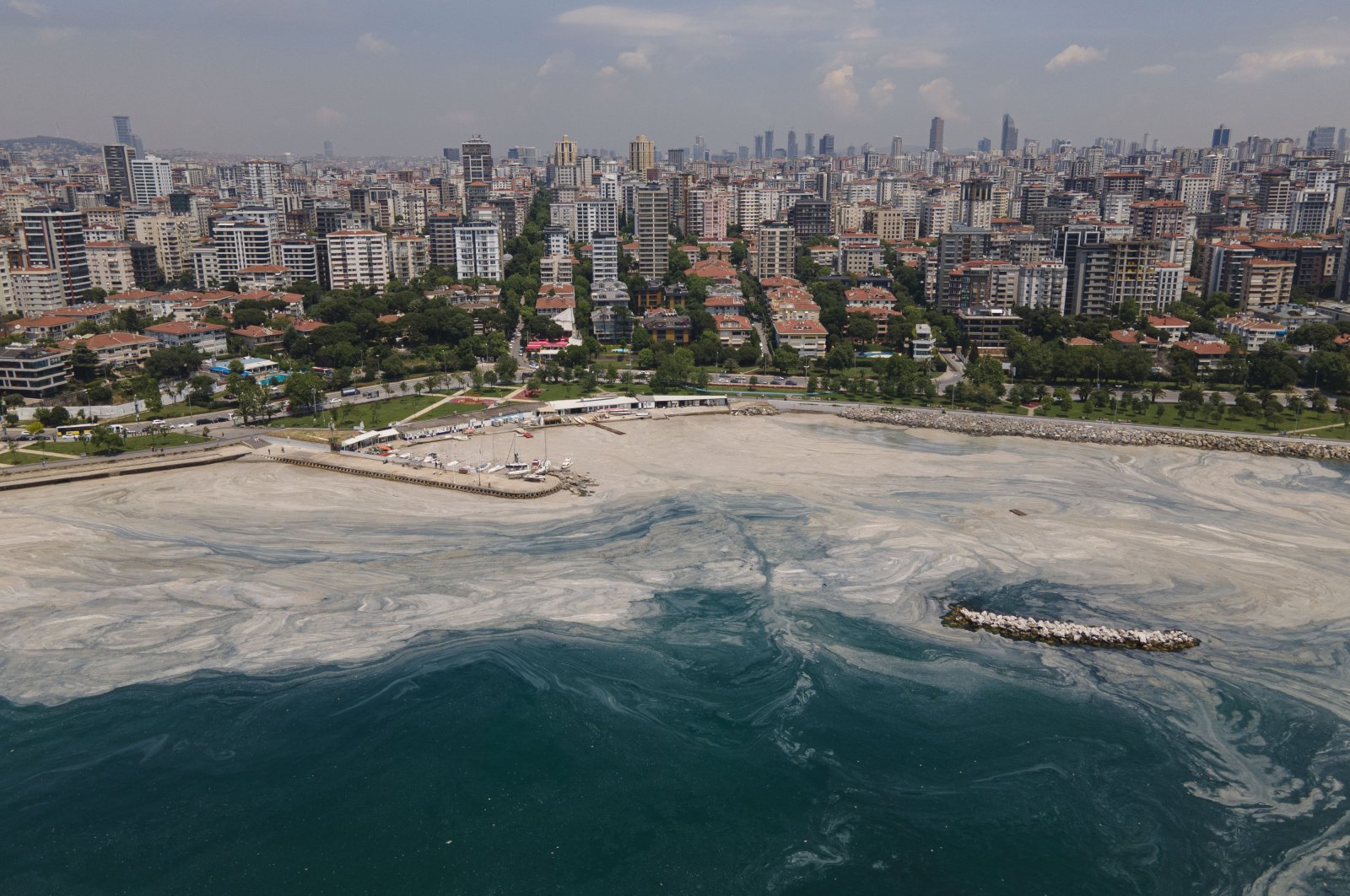 A huge mass of marine mucilage, a thick, slimy substance made up of compounds released by marine organisms, coagulates in the Marmara Sea off the Caddebostan shore, on the Asian side of Istanbul, Turkey, June 7, 2021. (AP Photo)
by Anadolu Agency Jun 15, 2021 7:18 am
RECOMMENDED

Efforts to clean up overwhelming "sea snot" – a thick substance made up of compounds released by marine organisms – from the Marmara Sea are underway in Turkey.

The Turkish government, however, has decided to clean up the water in accordance with the Marmara Sea Action Plan to halt the degradation of the marine ecosystem.

Here are five things to know about mucilage.

Mucilage or "sea snot" is the result of the overgrowth of microscopic algae called phytoplankton, which constitutes the first step of biological production in the sea. The thick, mucus-like slimy layer contains a variety of microorganisms.

Mucilage formation, which is a secretion released into seawater in response to changes and anomalies in sea conditions, requires a stagnant sea as well as a high amount of nitrogen and phosphorus contents.

Mucilage, which is a part of a natural process under normal conditions, can expand excessively when the weather gets warmer in the spring months and it finds the right temperature and light.

However, as in the case of the Sea of Marmara, experts say the structure of the sea, intense pollution and waste and global climate change are the main reasons behind such intense mucilage formation.

When did it start affecting Turkey?

The mucilage problem, which was first reported back in 1997 in the Dardanelles and the Marmara Sea, resurfaced in 2007-2008 in a big way and stayed for a long time.

This year, it was detected in January and then intensified and expanded in April, resulting in a much bigger problem than previous outbreaks that usually disappeared in a month or 45 days.

As it continued to increase in intensity in May and June, Turkish authorities announced a comprehensive action plan to clean up the Sea of Marmara.

Although there have been reports of mucilage reaching the Black Sea and the Aegean Sea – because the Sea of Marmara connects them – experts do not expect a large expansion in the two seas due to differences in condition and geography.

What dangers does mucilage pose?

Mucilage, which causes visual pollution and a bad odor, is said to be a serious threat to the marine ecosystem.

While mucilage prevents oxygen transfer by covering the area from the sea surface to 30 meters (98 feet) deep in the Sea of Marmara, experts say it also kills nonmotile or immobile organisms such as mussels, oysters and pina, particularly sponges and corals.

Fish larvae and eggs are also severely harmed by mucilage, and it is also predicted that the fishing industry will suffer as a result of this situation in the coming years.

It was stated that the tourism sector around the Marmara Sea, mostly comprising of small family businesses that cater to domestic visitors, will also be affected.

Is it common elsewhere?

Experts say the first sighting of mucilage was recorded in the Adriatic Sea in 1729.

According to reports, the mucilage has been present constantly since the 1900s in that region and scientists have conducted various studies on the issue.

Experts point out that sea snot was observed in coastal areas where the human pressure was high in the 1990s, and that a similar situation occurred in the Adriatic Sea in 2007 and 2008.

During the 2007-2008 period, countries with coasts on the Adriatic Sea gathered to tackle the mucilage problem, and they mostly solved the issue due to a long-term plan and coordination.

Experts say that simply collecting mucilage on the surface will not yield definitive results. They suggest that conditions conducive to the formation of mucilage should be eliminated for a long-term solution.

To prevent marine mucilage, waste must be discharged after refinement, which removes impurities.

Aside from taking various steps to protect the fish population and biodiversity, it is also important to expand the protected areas that will allow the Marmara Sea to breathe.

It is also recommended that the number of advanced waste treatment facilities and inspections are increased.

Experts also agree on the action plan, with some of them optimistic that the Sea of Marmara may begin to recover within the next five years.