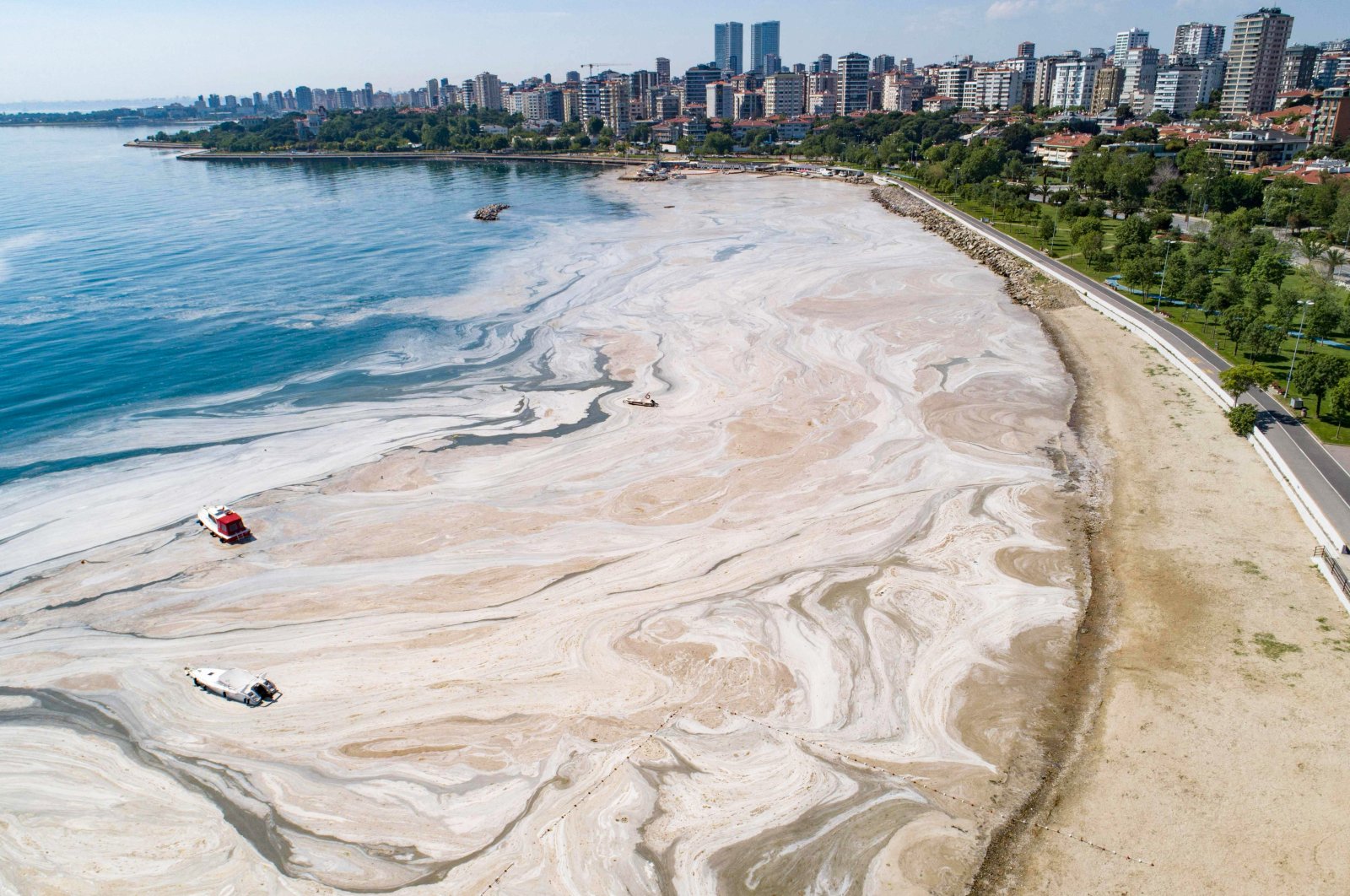 Turkey announced a new action plan to combat marine mucilage, or 'sea snot,' covering parts of the Marmara Sea, but the thick substance has now spread to the Black Sea, with experts warning about the future risk

An organic, slimy mass called marine mucilage, or "sea snot" as it is known colloquially, has become an imminent threat to the Marmara Sea in Turkey’s northwest. Just as the government unveiled new measures to fight it, a second sighting of the phenomenon was reported in the Black Sea, north of the Marmara. After Samsun, mucilage was also spotted off the coast of Ordu province. Though it is in a very limited area, unlike the Marmara, the microorganism boom may be as bad in a few years without timely measures, experts warn.

Pollution and climate change are among the causes of sea snot, which destroys flora and fauna by cutting off oxygen at the bottom of the sea and closes down beaches to swimming.

A thick layer of sea snot emerged off the coast of Fatsa, a town in Ordu, less than one month after it was reported off the coast of neighboring Samsun. Crews from the local municipality cleaned up the small area affected by the mucilage, but professor Mehmet Aydın warns that within “three to five years” the Black Sea could be facing a grim situation. Aydın, of the Faculty of Maritime Sciences at Ordu University, told Demirören News Agency (DHA) on Monday that pollution played a role in the mucilage, pointing to excessive use of nitrogen and phosphorus in agriculture in the region known for tea and hazelnut production. Aydın says both the Marmara and Black seas are “landlocked,” and this aggravated the impact of industrial waste and sewage discharged into them. He noted that the region lacked advanced wastewater treatment facilities, warning about the practice of “deep discharge” that dumps waste only 20 meters (65 feet) deep.

Authorities on Sunday announced a 22-point action plan to clear a recent surge in mucilage in the Marmara after days of talks to draft a plan as part of a workshop attended by government officials, academics and experts.

"As part of the emergency response, as of June 8, 2021, efforts will be launched to completely clean the mucilage in the Marmara Sea with scientific-based methods on a 24/7 basis," Environment and Urbanization Minister Murat Kurum told reporters during the launch of the plan.

"On Tuesday, we will conduct the largest sea-cleaning (effort) in Turkey with a consciousness of mobilization together with all our institutions, municipalities, nature lovers, athletes, artists and citizens," Kurum said.

Kurum announced that the government would form a "coordination board" that would include the Ministry of Environment and Urban Planning, universities, chambers of industry, nongovernmental organizations (NGOs), and other relevant institutions and organizations to reduce pollution and monitor the Marmara region. "A scientific and technical council will be established under the Marmara Municipalities Union," he said, adding that the board would be formed as of next week.

He also revealed that an integrated strategic plan for the Sea of Marmara would be prepared within three months as a framework for efforts to be conducted. "We will launch efforts to designate the entire Sea of Marmara as a protected area," said Kurum, adding that the 4,382 square mile body of water would be brought under protection by the end of the year, which would also help conserve its biological diversity. Surface cleaning boats have already started cleaning in almost all points of the sea, he underlined.

Vowing to support local administrations in all areas including technically and financially, Kurum said these decisions would "accelerate the improvement in the water quality of the Marmara Sea" by minimizing and controlling nitrogen and phosphorus that causes mucilage and other types of pollution. He also said wastewater discharge standards and regulations would be updated and implemented within three months.

The plan will also entail supporting the expanded reuse of treated wastewater wherever possible and the application of clean production techniques, Kurum said.

He underlined that the water resources of the entire world, not only Turkey, have been impacted by climate change, making the recovery of treated wastewater of the utmost importance. The aim is to increase the rate of treated and reused wastewater in the country, which is currently 3.2%, to 5% by 2023 and 15% by 2030, he said. "Arrangements will be made within three months to prevent the discharge of wastewater from ships into the Marmara Sea. Currently, they already aren't allowed to dump (wastewater) into the sea without treatment," Kurum said, adding that vessels entering the sea would be required to unload their refuse onto waste reception boats or in facilities. "In this context, together with our local administrations, we'll strictly monitor ships. We'll increase our inspections."

Kurum also emphasized that authorities would make clean production techniques more widespread in shipyards, preventing possible marine pollution with more environmentally friendly practices. The number of facilities monitoring wastewater treatment plants along the Marmara coast will be increased to 150 from the current 91, with 24/7 supervision by Turkey's environment agency to be expanded using remote sensing, satellite and early warning systems, unmanned aerial vehicles and radar systems, he said. The ministry will also develop a "digital twin" of the Marmara Sea that will involve a large amount of data from meteorology to pollution loads via 3D modeling, Kurum added. "We'll view details on all the pollution sources and densities in the Marmara (region). We'll monitor changes in these regions in real time. No matter the location, we'll intervene in pollution instantly. We will also have attained the capacity for early intervention in the event of potential negative scenarios in the Marmara Sea in the future, not just today," he said.

Pointing out that 90% of solid marine waste and garbage comes from the land, Kurum said that in a year, all of Turkey's provinces and districts on the Marmara coast would transition to zero-waste practices. "We will collect our waste on the land, decompose it, and contribute to our economy and employment," he said. He added that by also utilizing good and organic farming practices, as well as making pressure and drip irrigation systems more prevalent, "we will reduce the amount of water used in irrigation and prevent pollution from reaching the Marmara Sea via streams."

During his speech, the environment minister also underlined the importance of preventing pollution from reaching the sea by creating artificial wetlands and buffer zones in basins linked to the Marmara Sea. "For this purpose, we'll facilitate technological transformations to reduce wastewater," he said, adding that the government, starting with municipalities and individual institutions, will gradually reduce the use of all harmful substances in urban sanitation that damage human health and flow into the Marmara Sea. "First, we will identify and start using organic cleaning products in our institutions. As a ministry, we will provide the necessary financial support."

"All ghost nets in our Marmara Sea will be cleaned by our Agriculture and Forestry Ministry within a year," added Kurum, pledging to ensure that fishing activities are conducted in an ecosystem-based fashion and protected areas are developed. He also vowed that his ministry, upon the instruction of President Recep Tayyip Erdogan, would provide the necessary economic support to fishermen negatively impacted due to the mucilage.

On the causes of the rise in sea snot, Kurum said that waters in the Marmara were 1 degree Celsius (1.8 degrees Fahrenheit) warmer than that of other seas. "We will take measures to reduce the impact of hot water, including cooling water and thermal facilities on the Marmara Sea," he said. "We will carry our Marmara Sea into the future in its purest form, protecting 1,001 species of fish and living things," Kurum added.