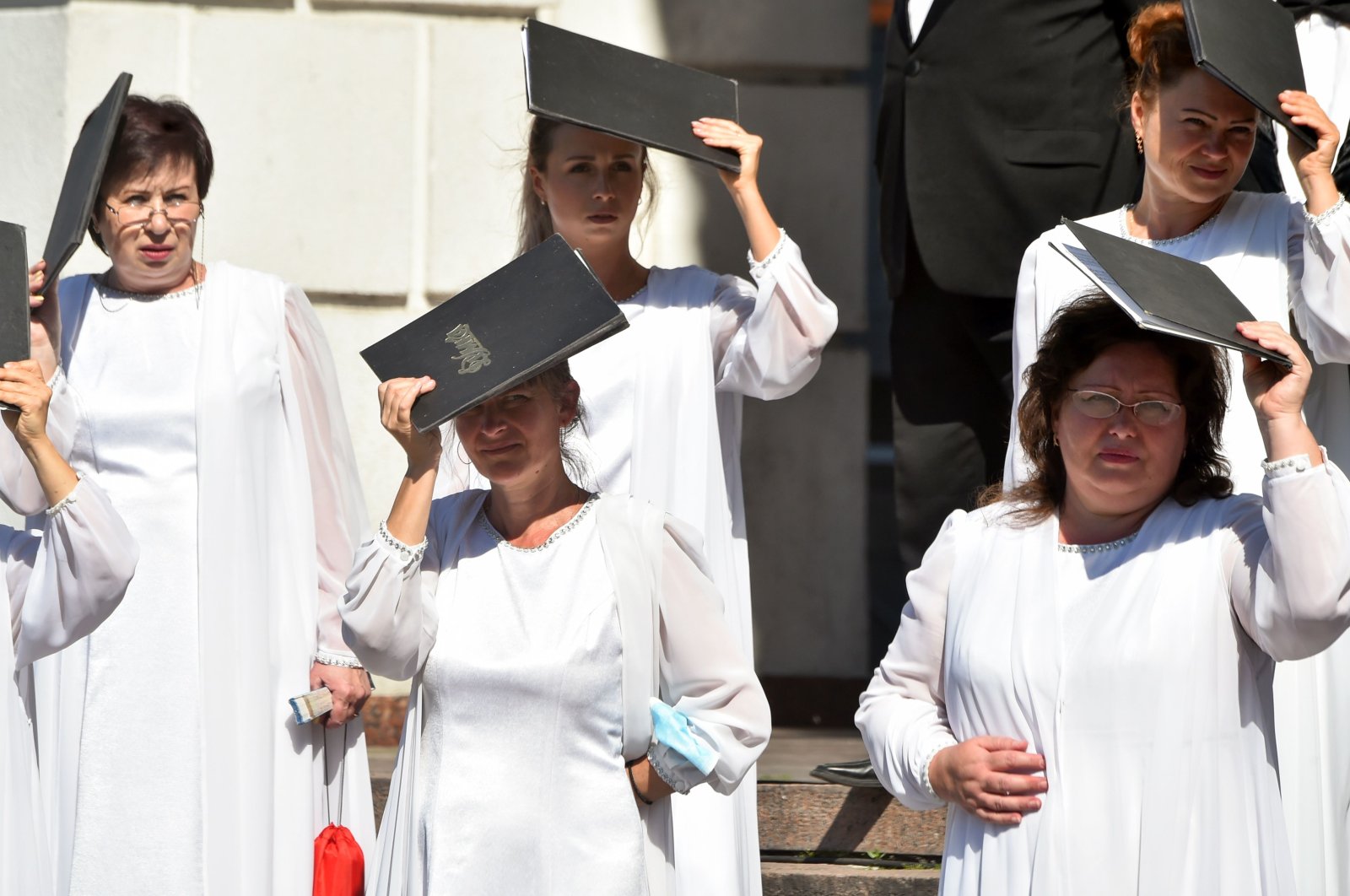 Choristers of Ukraine's Chapel of "Dumka" protect themselves from the sun with folders and notes during an open-air performance at Kiev's Independence Square during a hot summer day on Aug. 6, 2020. (AFP Photo)
by reuters
Aug 06, 2020 10:27 pm

Last month was the world's third-hottest July on record, new data show – the latest milestone in a global warming trend that has seen the three hottest Julys within the last five years.

With the heat has come a high level of ice melt in the Arctic, where the extent of sea ice last month hit the lowest level for July since the polar satellite record-keeping began four decades ago, according to the European Union's Copernicus Climate Change Service.

The new findings come as France and Belgium brace for a possible weekend heatwave, while Italian roads near an Alpine glacier were closed amid warnings that high temperatures could cause ice to collapse.

"It's not just a summer thing," said Copernicus senior scientist Freja Vamborg. "It's on a global scale, and all months are warming."

Atmospheric temperature records dating back to the mid-19th century reveal the last five years to be the hottest yet. In terms of records for the month of July, only 2019 and 2016 were warmer than last month.

Even above the waters of the northeastern Pacific Ocean, sea surface temperatures reached nearly 5 degrees Celsius above the 40-year average in some places, the data show.

In the Arctic, which has been warming at more than twice the global rate in recent decades, the expanse of sea ice shrank to its lowest level recorded for any July since 1979. The data service said satellite images reveal ice-free conditions "almost everywhere" along the Siberian coastline – a shipping route that, until a few years ago, could be crossed only with an ice-breaking vessel.

"It's difficult to talk about average conditions in the Arctic," where ice cover fluctuates from year to year, Vamborg said. "But this is a very, very clear downward trend over the last 40 years."

The heat has also been linked with wildfires that have been scorching patches of Siberian forest and permafrost since mid-June. An image on Wednesday from a Copernicus satellite showed a massive smoke cloud over the remote Russian region.

Carbon monoxide levels over Siberia suggest the wildfires "really took off" in the last two years, said Mark Parrington, a senior scientist at Copernicus tracking wildfire emissions. Meanwhile, the Siberian fires this year have already released roughly 200 million tonnes of carbon dioxide – more than in any of the previous 17 years, he said.