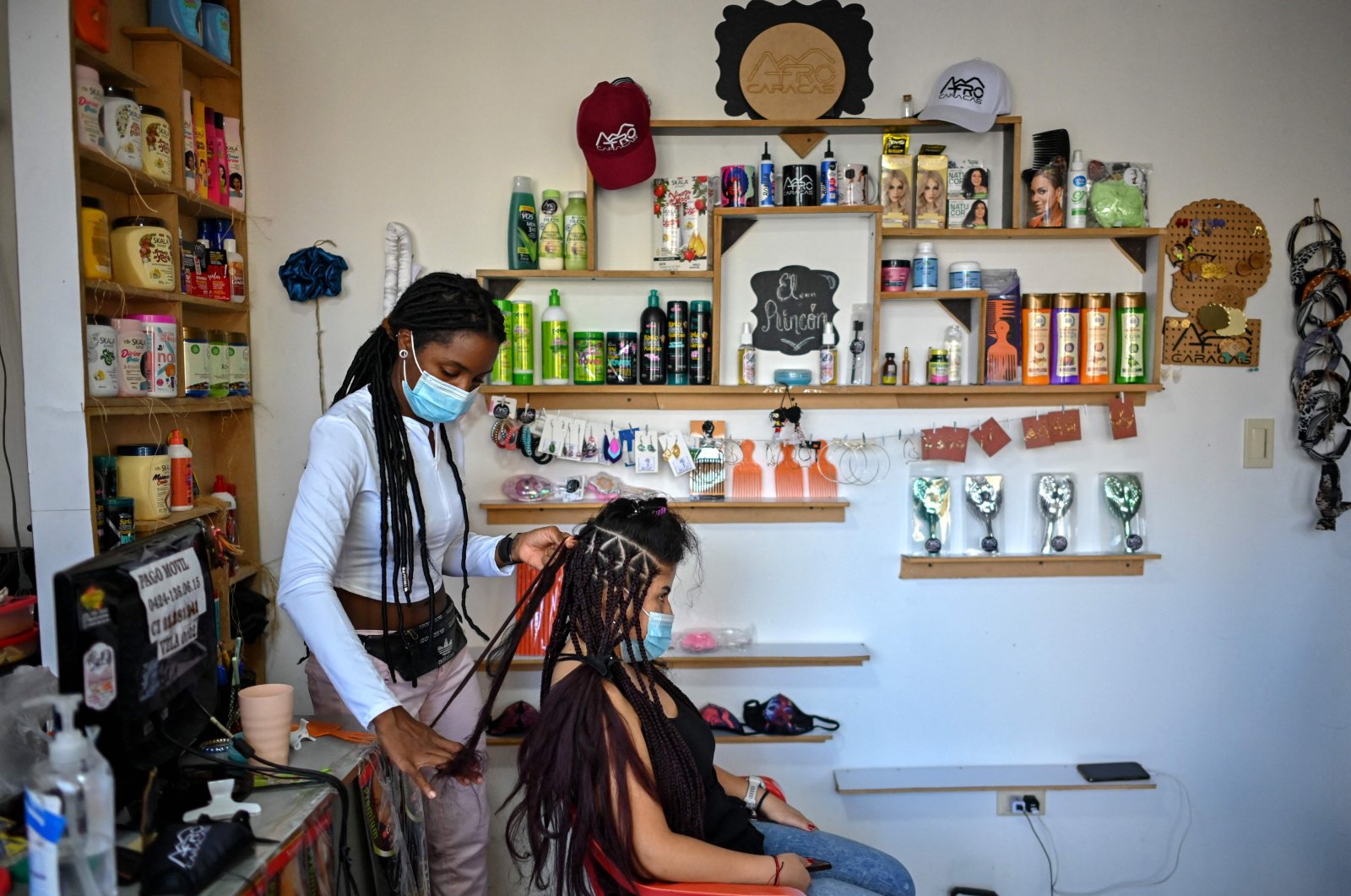 Wearing natural Afro-textured hair proudly has become an expression of black pride after the black community's naturally kinky hair became a point of political contestation in the West. Generations of the black community worldwide were pushed to treat their hair with harmful chemicals or donned sleek wigs solely to appear "presentable" in public.

Venezuela is no stranger to this global trend.

Two years ago, Victoria Mejias abandoned her slavish pursuit of sleek tresses – a common obsession in Venezuela where hair and race identity are closely intertwined.

After near two decades of struggle with damaging chemical straighteners, she embraced her naturally curly hair and a bold, shoulder-length Afro style and says she feels "divine."

From the age of 12, when her mother started relaxing her hair, "I felt obliged to present myself in a certain way, because straight hair gives you status," Mejias, now 28, explained at a salon in central Caracas where she was treating herself to a moisturizing treatment.

Mejias said she long felt ashamed of her "pelo malo" (bad hair), as natural black hair is called in Venezuela – a symptom, some say, of deep-seated racism.

Then, she had a change of heart.

"I was tired of salons (for straightening treatments), of not having the freedom to let my hair get wet (as it would frizz).

"It felt like a form of slavery," she told Agence France-Presse (AFP).

Changing to an Afro style was "like meeting me again. It was the best decision I could have made," she said.

Venezuela has a racially diverse population as a result of mixing between Indigenous peoples, Spanish conquistadors who arrived in the 15th century and the African slaves they brought from the colonies.

The country also received an influx of Europeans escaping the ravages of World War II and people from other Latin American countries fleeing dictatorships and armed conflict over the decades.

Today, more than half the population identifies as mixed-race or "mestizo." Yet, it is widely accepted that the darker your skin, the likelier you are to be poor in Venezuela, and to suffer from prejudice.

'Not with that hair'

Despite a 2011 law against racial discrimination, the country has a complicated relationship with its cultural identity.

Racism is sometimes overt, often subliminal.

In Venezuela, "everything that comes from being black we think of as bad or ... as exotic, that is, not the norm," sociologist Zulima Paredes, who has written about the aesthetics of Afro hair, told AFP.

The country that has enjoyed outsized success in the world of beauty pageants, has won the Miss Universe title seven times.

All its winning contestants were fair-skinned and had straight or straightened hair, reflecting the nation's continued pursuit of a "western European" standard of beauty.

In 2018, when dark-haired, olive-skinned model Isabella Rodriguez was crowned Miss Venezuela – her tresses also artificially straightened – she was ridiculed online for her modest background and her mixed-race roots.

Paredes, who is also of mixed race, said she suffered workplace discrimination over her hair. Once, applying for a job while sporting an Afro, "they told me: 'look, no, with this hair you will not get in here.'"

And the victimization starts young.

"You cannot enter school with an Afro hairstyle, you have to tie it up ... or straighten it," under many prevailing dress codes, said hairdresser Gabriela Delgado.

Under such indoctrination, she herself used long, straight hair extensions until four years ago, when she decided to switch to dreadlocks.

"There are people who start relaxing their hair as young as six, five," said Delgado's colleague Ludizay Gardona, 35.

The pair work at Afro Caracas, a salon specializing in black hairstyles.

"People have not yet shaken off the stereotype that black people were slaves and not much else. These prejudices are what we are trying to change ... We have to become strong," said Delgado.

"This hair has not hurt anyone, it cannot be bad," she said.

The issue was tackled in the 2013 Venezuelan film "Pelo Malo" about a young boy's obsession with straightening his hair, which won the best film award at the San Sebastian Film Festival.

Venezuela is not the only country to have struggled with the issue.

In 2019, South African Zozibini Tunzi, became the first Black woman with a short, natural haircut to be crowned Miss Universe.

"I want to reassure people that this hair is as beautiful as any other hair," she said at the time.

In July 2019, California became the first United States state to ban discrimination based on a person's natural hair, in a law that stated that hair was a frequent reason for racial discrimination, particularly for black people.