Can digital fashion shows ever replace the real thing? 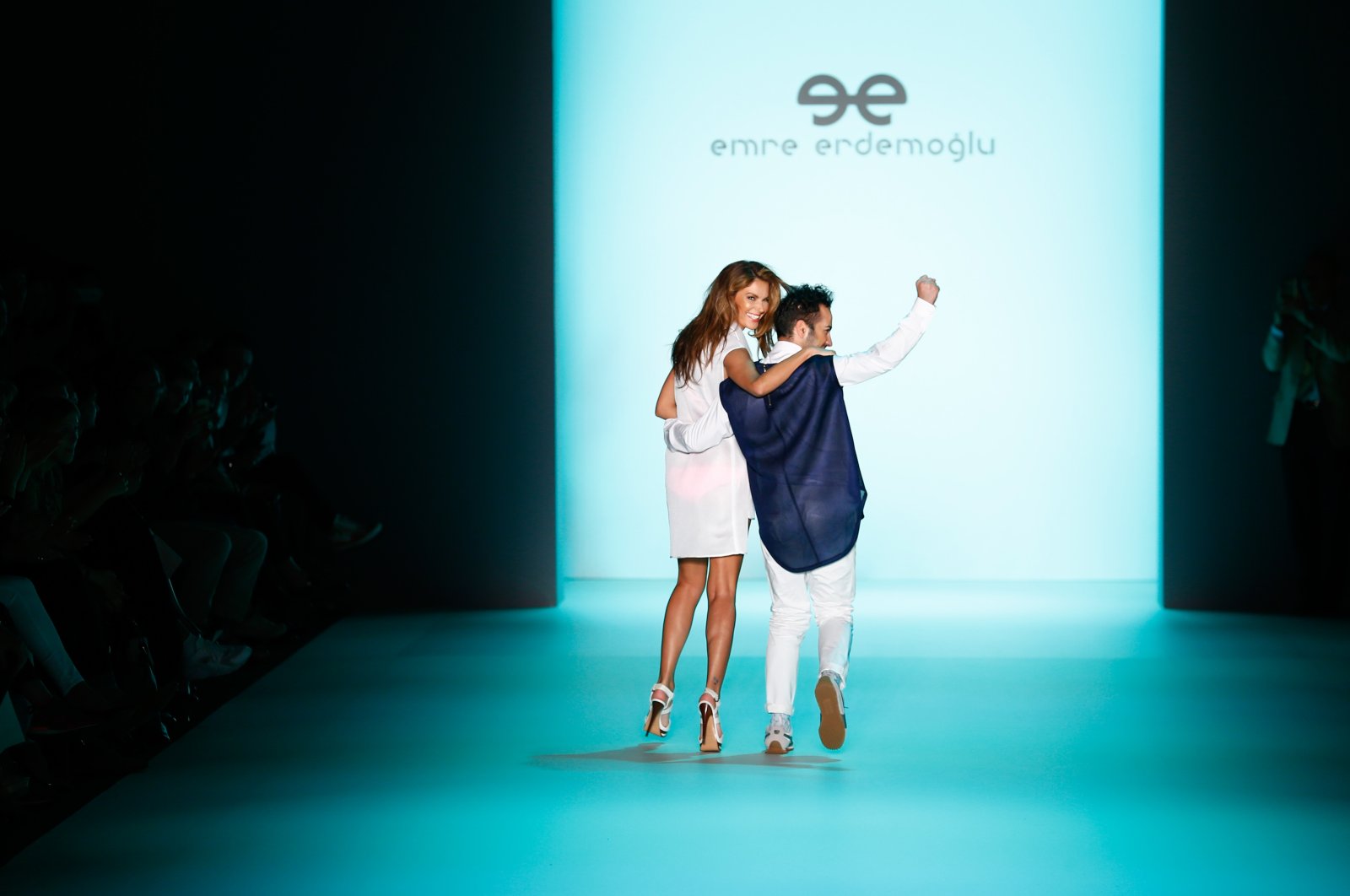 Could digital fashion weeks come close to the warmth and the emotion that we're used to seeing on the catwalk? Here is a Turkish designer’s take and more on the pandemic and fashion

Ears are ringing with the tones of telephones going off nonstop, and in the air lingers the smell of Redken hairspray and that signature vanilla-esque Mac lipstick. Lights blazing, camera flashes glaring, selfie parties break out in front of the mirrors. The music booms from the speakers against a backdrop of an indiscernible murmur from the audience on the other side of the curtain. It’s fashion week, baby.

Backstage is crowded – there are models, designers, stylists, makeup artists, hairdressers, managers, assistants, publicists. Nerves are high, and the excitement is bubbling up. Oh, that sweet, sweet panic.

"Places, people!" And that’s the cue.

Suddenly you are caught in a whirlwind; models are off to the runway and in mere seconds they’ll be back for an outfit change. Jewelry comes flying off, clothes are yanked off, shoes kicked off in haste. Adrenaline is pumping through the room. And all in what seems like a flash, it’s already over.

That’s what designer Emre Erdemoğlu wondered at first too.

"We had to halt everything in March and after they told us we would be going digital for the first time. We were bemused, it was such an interesting experience. After being used to that telephone traffic, the crowds, and the hustle and bustle (of fashion week), it seemed very unpleasant and I did not feel as if I was putting on a real show," he said, in all honesty.

"But when it was all done, the end-product was excellent, and I realized I enjoyed it. The photos and the shooting were nothing less than a live fashion show, it was such high quality. I had an amazing time and it was really beneficial for me and my brand," he added.

Milan, New York, Paris – all of them went digital and all of them produced beautiful art and imagery, he said, adding: "It turns out that you can do it without an audience. We saw it wasn't impossible to hold a Digital Fashion Week; it was as good as the real thing."

The forced switch from in-person to digital has also introduced a new dimension into fashion, and that's social media. The audience element, instead of there and then, enters the picture later down the line.

"You just meet your people on different platforms and at a later set date. Your collections reach as many, if not more, people. You also get to interact with them in real time," he said. The support designers received from the Istanbul Textile and Apparel Exporters' Associations (ITKIB) and the Fashion Designers' Association (co-headed by Özlem Kaya) was instrumental in realizing Istanbul's first Digital Fashion Week last year, he added.

Erdemoğlu says he was also against an online store for a long time because, for him, it was all about the multisensory experience when choosing a garment, seeing with your own eyes those vivid colors and feeling the softness of the fabric between your fingers.

But the pandemic proved that it was impossible to survive without taking things digital, especially after shopping malls were ordered shut in Turkey to combat the spread of COVID-19. Yet, that and social media have become changes he's grown to love.

One more thing that has changed in the fashion sphere is the definition of seasons.

Erdemoğlu said that, traditionally, you’d never be able to see summer colors, light and thin fabrics in an autumn-winter collection; it was all wool, cashmere, velvet, dark and broody.

“Now, (owing to climate change), we are experiencing winter in the middle of summer and summer in the middle of winter. You leave the house with your coat and by midday you need to be in a T-shirt. That’s why you need layers. Nowadays we prepare our AW (autumn-winter) and SS (spring-summer) collections together. This has been an interesting and exciting change for me,” he said.

Wrench in the works

When you’re in the business of fashion for over a decade like Erdemoğlu has been and have an established brand that caters to the famous, it’s only natural to have a busier than normal schedule. But like every sector on earth, fashion, too, took its hits from the COVID-19 pandemic. For Erdemoğlu, this meant no more celebrities to outfit for concerts, and no more galas to attend. His workload lightened considerably, but clients still trickle in during the week.

"That last one was very demanding. I was in a constant cycle of creation and production," he said.

When restrictions were first announced in March 2020, Erdemoğlu said he had to halt work for a while because he had to reconfigure a new space for himself.

"I turned my home into my home office, and now I'm just so used to it; it's cozy. I just have a little rest on my couch when I feel a break coming," something he couldn't do in his usual office, he said.

The rush is something he misses, as being busy was something that came with the job.

"I miss visiting museums the most, I think," he said. "I used to travel (for work) quite a bit."

The pandemic hasn't managed to change his personal routine, though. Erdemoğlu said he is a morning person and likes to get a head start on his day.

“I get up and go for a walk, otherwise I cannot wake up. Breathing in the fresh air and getting the body moving is important both to keep fit and be more energized," he said.

I notice his unique coffee cup; an off-white handmade ceramic creation that has two hand-painted tulips arranged as a face and lips. Erdemoğlu quickly admits he is one of those who cannot start the day without a caffeine fix.

"Is it black?" I ask, knowing about his stint in Italy. "No," he said, showing me a glimpse. "Turkish coffee." A man of tradition, he is.

Having established his brand first in Italy, that chapter of his life was special to him, he continued.

"Having won the 'Most Creative Collection' award (from Camera Nazionale Della Moda Italiana) was one of the greatest honors in my life. I think it's also the fact that firsts are always special," Erdemoğlu said.

A few years later, he caught the attention of Vogue Italia with his "Clark Gable" collection, leading to one his most talked-about collaborations in his career. In 2014, he collaborated with the Turkish Leather Brand to create a special collection that debuted in Florence and received an eight-page spread in Vogue.

For a brand whose clients are 98% men, when it comes to dressing men, there is one big difference for Erdemoğlu.

"Men are so much easier to dress. You tell them, 'You have a belly, and we need to hide it,' or tell them they can't wear that skinny of a pant with thicker thighs, and they'll unconditionally surrender to you, and they just accept it," he said.

"Whatever you say goes," he said, chuckling.

Whereas with women, he said, though not always, it can be a challenge to make a point because many have fixed ideas of what suits them or what doesn't. "They often want to be somebody else, not themselves," he said.

If Erdemoğlu were to choose three adjectives to describe the EE man, he says he'd say they were dynamic, elegant and innovative. For a brand that does not shy away from colors or patterns and loves to play with modernizing trends, the description fits to a T.

"There is always a story behind my clothes, and they are energetic. I closely follow trends and inject them into my clothing with color, form, structure," he said.

With a brand that bold, does the designer behind it take notes on style from his own daily life? Not quite, said Erdemoğlu.

"As I have a very busy schedule and have to meet different people during different times of the day, I feel that I can't be as ornamented and colorful. It can get distracting," he said. In short: Do as the teacher says, not as they do.

"I love wearing dark colors, longline coats and a good black. I'm not as brave as my brand (in my daily life) but when it comes to special occasions, I do wear more interesting designs," he added.

A story to tell

When you are a designer like Erdemoğlu, you can draw inspiration from anything. He says he is often inspired by the experiences he goes through in his life.

"Whatever I've gone through that year surfaces in my designs. An exhibition I've visited, a concert I've been to, a song ... That's what design is: the accumulation of what you feel in your heart, good or bad, and the embodiment of the emotions you feel the most," he said.

It's also the urge and love of telling a story that inspired him to create.

"That's the force that gets me out of bed every morning," he said, "the excitement of saying I have a new story to tell today and I'll put this down on paper and draw it to life."

Aksu is the first name that comes to mind when one mentions love. So, he went knocking on her door one day and asked if he could channel this song for his collection, and the rest was history

Meanwhile, his newest collection for A/W 21, titled "Beni bağrına bas," which could be translated as "Embrace me" or "Welcome me with open arms," was a culmination of feelings he and the rest of the world have felt over the last four or five years.

"It tells of how intolerant we've become over the years and how we need to forgive each other's sins and stupidity, and embrace one another indiscriminately, no matter what color, gender," he said.

Erdemoğlu said the collection also incorporated a green theme, and every single garment was made out of sustainable fabrics and recycled threads and cotton.

"This has been an area I've cared increasingly more about in recent years. Not caring (about the planet) would be foolish. It's high time we cast aside this consumerist craze and create something meaningful and beneficial. Both we and nature have taken enough hits. It's been over a year, and we cannot even leave our houses because of a tiny virus," he said.

Awareness and collective action are what will change things, Erdemoğlu believes, and he said he will continue to play his part in getting there.