From boat to bag: Giving new wind to old sails through upcycling 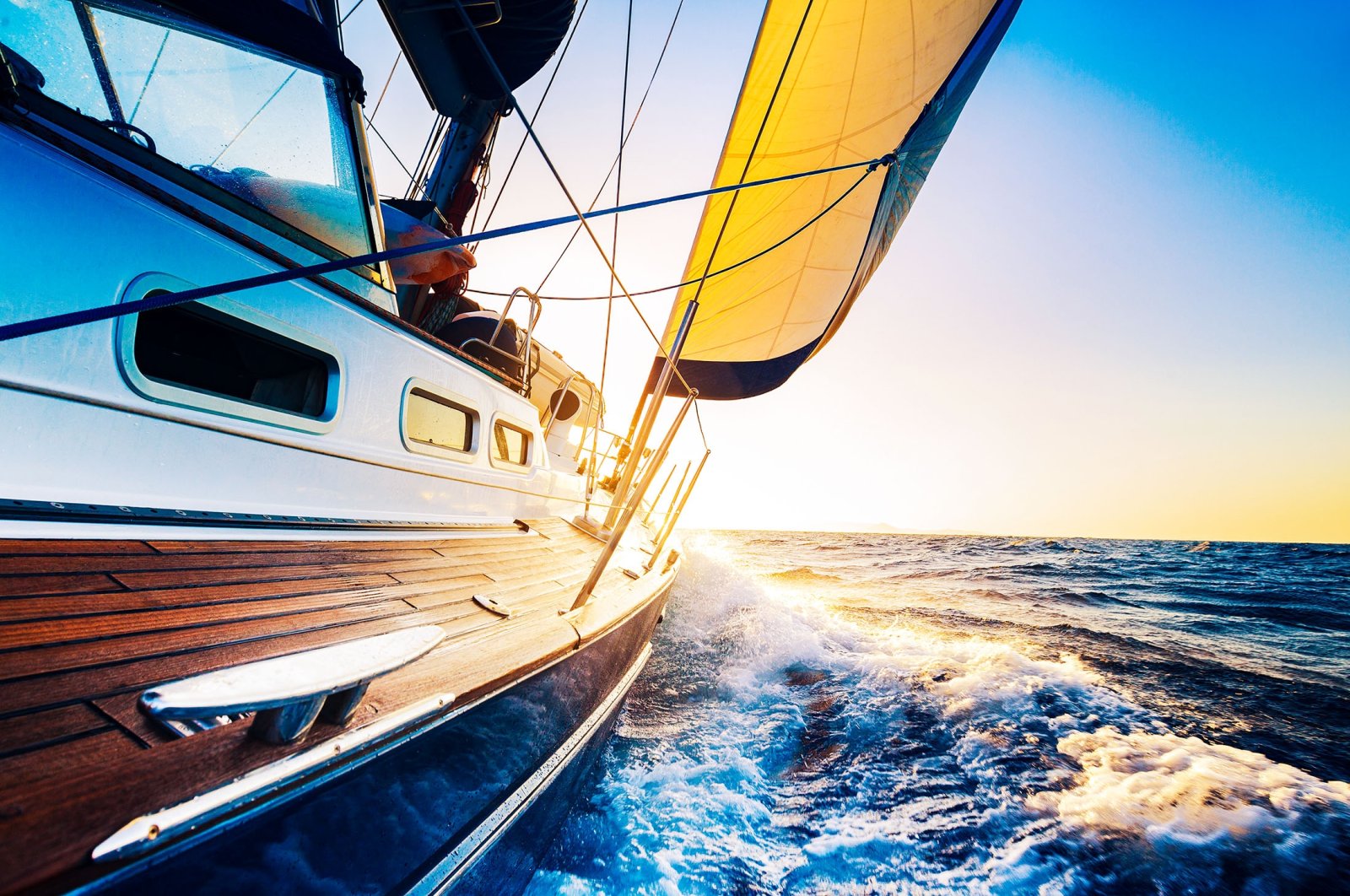 When a sail rips or is on its last legs, upcycling the fabric into something useful saves it from going to trash. (Shutterstock Photo)
by Yasemin Nicola Sakay Apr 28, 2021 2:05 pm

Bags. They come in all shapes and sizes – from clutches and shoulder bags to backpacks and totes, there is a style that can fit every occasion and gender. But what if someone told you that the bag on your shoulder was once the sailcloth from a yacht that won the Bodrum Cup or from a sailboat that toured South America? Sounds cool, doesn't it?

And that's what this small independent Turkish brand has been doing for the past five years. Meet Hüner Aldemir and her label "Huner."

Aldemir comes from a family that can sew, from her aunties to her uncles, almost every member was taught how to use a needle and thread. Her grandmother was a tailor and when Aldemir turned 7, she decided she wanted to follow suit. By the time she was 8, her aunt was teaching her how to sew. Her mother and father were architects; evidently, Aldemirs like to keep their hands busy with arts and crafts.

She chose to pursue her education in the field of fashion and textile design, and completed her Bachelor of Fine Arts in Fashion Design at the Pratt Institute in Brooklyn, New York. She admits that although they had a course on sustainable fashion at the time, not many students comprehended the importance of it. She was also one of them: dreaming of working with beautiful, silky fabrics and imagining all the different designs she could create, not the ramifications of using these resources.

After four years of studying and two years of apprenticeship with the award-winning fashion designer Peter Som, something clicked in Aldemir's brain and suddenly the glitzy veil of fashion was lifted before her very eyes.

She noticed how much scrap fabric and deadstock inventory was left over after the four seasons of design. Production trumped consumption, multifold.

When she returned to Istanbul, she found herself in the world of e-commerce, scrutinizing the selling tactics and purchasing behavior. Each passing day made her realize that she was living in a world with a nonsensical hunger for producing, much more than anyone could ever need.

At that point, she wasn't thinking of establishing her own brand, or possibly contributing this to madness. But then she answered the open call for the 15th International Architecture Exhibition – La Biennale Di Venezia by the Istanbul Foundation for Culture and Arts (IKSV) and was asked to create tote bags out of old sailcloth sitting idle at the Haliç Shipyard. That was the spark that ignited Aldemir to take action.

The Turkish designer soon established her own brand, positioning it as an upcycling label from day one. She chose to use sails, having already been intrigued by their texture, strength and functionality.

By upcycling readymade raw materials, especially those that have been discarded or deemed unfit for further use would be a great way to reintroduce them into the economy, she thought. In that aspect, what Aldemir does is already a win for the environment and the fashion industry.

But is there a deeper meaning behind this peculiar choice of material? Where does this love of sails and the sea come from, I wonder.

Aldemir says she isn't sure either. Perhaps the boats docked at Fenerbahçe Harbor in Istanbul, where Aldemir spent most of her childhood, had a more profound effect on her after all. Or perhaps it was the summers spent in the Aegean and Mediterranean regions of Turkey with the sea, sand and sun. And although she has never tried her hand at sailing, she plans to finally dip her toes into the water this summer.

Of course, using such an unconventional material comes with challenges.

Sailcloth is tough, it is made to withstand forces of nature. Cutting, patching and sewing the fabric is no smooth sailing.

Despite being impeccable in leather goods and bag making, Aldemir says, Turkish master tailors found it hard to work with it. They were not used to working with such a difficult fabric; that's why at first, there was a lot of trial and error when manipulating and sewing it to make it more durable yet aesthetically pleasing.

Then came the challenge of fortifying a material that had partly or completely lost its structural integrity and shape.

As a woman who admits to engaging in the cardinal sin of putting her handbag on the floor, Aldemir says it was that habit that made her realize that the corners of the bags needed to be reinforced. Introducing various weather elements into the mix also showed her that coating or covering the fabric was essential if she wanted her creations to last for years to come.

With each production cycle, they ameliorate the designs, which makes it much more fun.

On the other hand, procuring old sails, contrary to what one would expect, is not hard, especially when the sails used for sailboats during races have a lifespan of about one to two years. Considering Turkey's gusty coasts play host to many sailing cups, there is plenty of material to go around. The performance of the sails also drastically declines with each use after baking under the sun, worn down by winds and salt, meaning they get discarded quicker.

Sails used on charter boats, meanwhile, can be used up to seven or eight years, but considering the time it needs for them to degrade under the soil that is still a disappointing figure, hence upcycling gives them the opportunity to extend their lifespan. Natural fibers such as cotton, hemp or flax aren't as commonly used in sailcloth; the industry instead prefers stronger polyester fibers, such as Dacron sailcloth, or nylon and carbon fibers that are woven or spun. This equals hundreds of years in a landfill.

"As long as people continue to sail, we won't have trouble finding material," says Aldemir.

The easiest way to grasp the importance of sustainability is to look at it this way: Human lifespan is 80 to 90 years and when we die we leave all the possessions we own behind. Every item we have brought or produced in that "short" window remains on this earth and continues to live on, often twice or thrice our age.

That is very dangerous from an environmental perspective, says Aldemir, especially when it is something plastic and nonbiodegradable. And that is what bothers her about her current brand.

"I wanted to get into it (sustainability) somehow," she says but adds that this spurred her to come up with another business idea.

Her soon-to-be-launched second brand will be creating its own organic raw materials that degrade in nature to offset that. But with that, again, comes more production and water and energy consumption, which is not ideal either.

"Nobody is perfect (as a brand or human)," she says.

Shopping vintage, secondhand or preloved is one of the most environmentally friendly ways to shop if you cannot stop buying, says Aldemir. You reintroduce a product that was a part of the cycle. And for those that are not in the shape to be used as is, upcycling swoops in.

Since the brand was established in 2017, Aldemir has incorporated more sustainable practices into her business and streamlined her production processes.

"I always saved my leftover fabrics. Carbon fiber and plastic are materials that don't easily degrade in nature. So I found it very hypocritical, being an upcycling brand and creating tons of waste each year. That's why we recycle or compost everything we use."

When in doubt, banishing the temptation from your sight is also a great option. "We don't even have a trash can at the office anymore," she says.

However, Aldemir acknowledges that being a perfectly sustainable brand today is impossible and you will always fall short on one aspect.

Her brand Huner, for example, sends their products in cardboard boxes; which makes it the better alternative to plastic and is recyclable.

"But using a material once and throwing it in the trash is not ideal," she stresses. A cardboard box alone sometimes cannot offer enough protection for accessories, especially when adverse (mostly wet) weather conditions are involved.

That's why Aldemir decided to reuse the paper that comes attached to the backs of the coating materials she uses.

"We fashioned it as our own cargo bag/pouch. This way, I can use this material twice and it is recyclable, which is better than just throwing it out."

Aldemir also works with one master tailor with whom she creates every product one by one. She has forgone seasons; she only starts producing after her stock has been sold out.

The past and the future

demir and her brand were in the middle of creating a collection of clutches and tote bags when the COVID-19 pandemic first broke out in March 2020. The production stalled for a bit but soon they were back on it, minus the office visits.

For Aldemir, the pandemic was more of a blessing than a curse.

"We initially saw a boom in sales in summer 2020," she says, owing this to a sense of newfound freedom and a heightening in awareness of the impact humankind can have on the environment with its consumption habits and movements across the globe.

Despite describing herself as one that loves to travel, meet new people and experience different cultures and "a person that cannot still," she says lockdowns showed her how important it was to slow down and take an inward journey instead. Confronted with the reality of being isolated, Aldemir instead channeled her energy into creating a sister brand.

She still is uneasy about creating virgin material and contributing to consumption but believes if small brands can show the world that using polyester is no excuse, so can major labels. And having a single "eco-conscious" line does not mean fast fashion brands are out of the woods.

Aldemir says it has been nice to see a collective slow fashion movement during the pandemic and an increase in awareness on social media with regards to sustainability, both by brands and the consumer.

"We aren't such a small minority as we think, we are growing every day," she says.

"Of course, expecting everything to change overnight would only lead to disappointment but I believe we are slowly seeing a transformation."