From white shirts to ethereal bridal gowns, a designer's journey 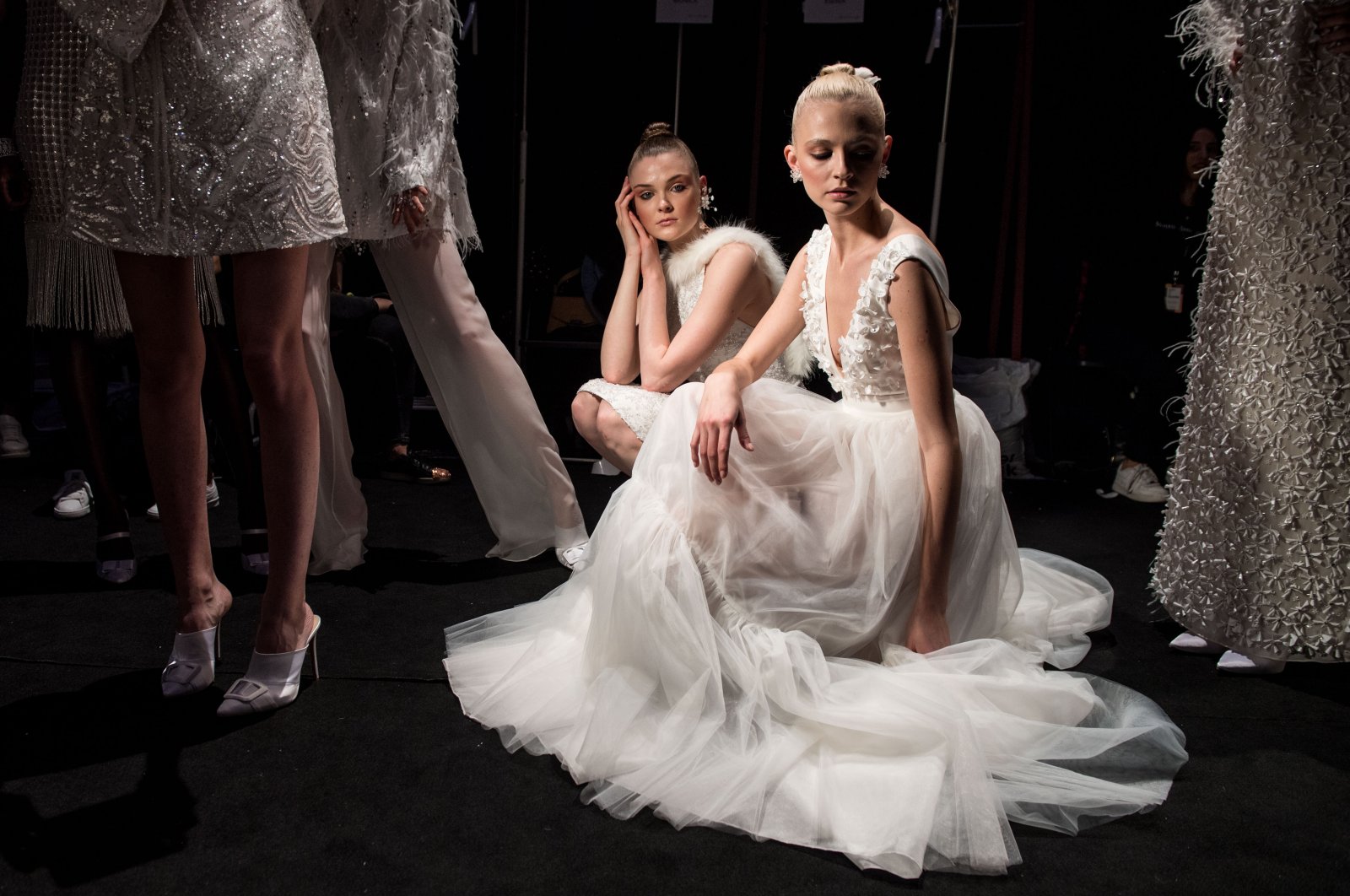 Turkish fashion designer Nihan Peker's story is one of passion, dedication and a love of all things white, crowned by the biggest honor of them all — being etched in memories as a forever-cherished day

A white shirt is as versatile as personal identities. As Venezuelan fashion designer Carolina Herrera once said, "Whatever you want it to be, the white shirt becomes.” And it's true; you can go from a midday meeting at the office to a coffee date with a change of shoes and slipping into jeans, you can dress it up or down "with diamonds or nothing" and even use it as a cover-up at the beach. Chic, effortless, minimal.

Turkish designer Nihan Peker also has a soft spot for this item of clothing. She, too, believes in the allure and power of a simple, crisp white button-up.

In fact, it's how she made her foray into the ready-to-wear industry.

"During those first years, my biggest dream was to design white shirts. I worked with (the nowadays closed) Bilstore on a collection of custom shirts."

True to her words, she is wearing a white button-up. The collar purposefully peaks out from underneath her crewneck cardigan, also buttoned up to the very top. It's an oatmeal beige cardigan with thin black stripes and rustic-looking buttons that paints a simple, elegant and classic look. The only accessory she has on, as far as I can see on Zoom (top dressing, the new reality), is a rectangular gold watch with a medium-sized band.

It’s impossible not to be envious of her bangs; thick, curtain-like and eyebrow-grazing – the kind not everyone can pull off, the kind many of us attempted during lockdown but failed in a state of cringe and misery.

As much as she loved the functionality and simplicity of a white shirt or blouse, Peker discovered over the course of years that her true passion lied in designing another white garment: bridal gowns.

For a designer that launched her career with ready-to-wear collections, getting into couture was nerve-racking, said Peker.

"People kept seeing that I had my own place in Istanbul and would stop by to ask if I made custom clothes, evening or bridal wear. I realized that was where the demand lied."

She too was plagued by self-doubt at first. She would need a new team, new seamstresses, a different structure for the atelier, but she took a leap of faith and dove right in.

"I am so happy I took that step because I am really happy now and I realized that the more I did it, the more excited I felt." Peker simultaneously created both couture and ready-to-wear collections, until two years ago when she also launched her bridal line. She describes it as a world where everything is white and pristine, a world, a job like no other.

“Creating wedding dresses is something that makes me immensely happy. It is an indescribable feeling, to become a part of someone’s most special day. Especially because I can only take on 2-3 clients (for bridal projects) a month, at the end we become friends. When you spend a good part of your day with someone, every day for a couple of weeks, it’s only natural,” she says.

It’s a feeling very few people get to experience, and so intimately.

“I leave a part of me in that gown and it lives on with her in her memories, to be stared at in a picture frame, with only the fondest of memories. I pour my heart and soul into it and its more than just a piece of clothing, it is an exchange of energies,” she adds.

Even if the COVID-19 pandemic has dampened spirits and forced couples to downsize their weddings, many are still going through with smaller, more intimate ceremonies.

“Last Thursday I had a bride and I went to help her get fitted.” Even with the masks and the forced distance, it’s still such an intimate, uniting experience, says Peker.

Last year Peker said she was in Paris to showcase her Autumn-Winter 2020 collection and returned to Turkey in March. A week later, as we all know, the hellish gates of the pandemic were opened and everyone had to go into lockdown.

"And to think of how excited and optimistic I was about the year ahead... But then we had to shut down everything; orders were canceled, collaborations were suspended." But, Peker, says this pandemic and lockdowns have been a blessing disguised as a curse.

"I didn’t realize how much time I had been spending at work. So this (lockdown) gave me more time to focus on my family, read and be creative. I was especially thankful to have time to read and research, something I had fallen out with over the years. I wasn’t bored at all."

With a toddler and a 5-year-old, it’s not hard to guess why.

Of course, she admits, now she can talk about those days in a more neutral state of mind but at the time she was scared and in despair. She had friends, family and colleagues suffer both physically and economically.

As someone that absolutely adores working and the work she does, Peker said: "I was scared that I would never be able to go back to my office." She channeled all of these emotions into her bridal collection which will debut at the end of February.

As much as she has managed to turn this experience into something positive for herself and her brand “in her own small world,” Peker is aware of the wider implications this pandemic has had on the industry as a whole.

"I can see the economic devastation on the retail and merchandising sectors", she says, adding that she was shocked to see higher-end stores and boutiques close for good on the streets of Nişantaşı.

"This passion for online shopping has turned into a craze. There are people ordering dozens of items a day, and this is not just the case in Turkey. I have clients in the Middle East too and the situation is the same there. This convenience has turned into something quite unhealthy," she said. The data supports this; whether it is to feel better, fill a void, look forward to something or gain a sense of control, online orders have multiplied by 2.5 times compared to December 2019.

"I always wanted to be in fashion, it was my only dream since I was a little girl," says Peker.

"Creating a single collection doesn’t mean you have established a brand."

With a strong technical background in fashion and design from Yeditepe University in Istanbul and Istituto Marangoni in Milan, Peker decided to take the first steps to establish her own brand and become her own voice in the industry. Towards the end of 2010, she created her very first collection and she has continued to roll out annual collections ever since. This year, she celebrates 10 years in the industry.

Establishing your own brand and bringing to life your own creations may be enough to say you’ve “made it” as a designer but for Peker, it wasn’t until she was chosen to represent her own country on an international platform that she truly felt a sense of accomplishment.

Along with her Turkish colleague Serdar Uzuntaş, Peker staged her collection at the International Woolmark Design Awards in 2014, the very competition that became a turning point in the lives of Yves Saint Laurent and Karl Lagerfeld.

Although nothing compares to how incredibly proud and honored she felt that day, this year in October when U.S. fashion influencer and entrepreneur Olivia Palermo chose to wear one of her designs at the digital Mercedes-Benz Istanbul Fashion Week was a close second.

"She had styled it in a way I would have never expected by wearing a tank top underneath. It was unique and beautiful. A very proud moment for me," she said.

As fun as designing collections are, her bridal gowns and custom-made tuxedo suits are easily her favorite creations, she adds.

Upon a closer look, it is easy to see that her brand embodies a refined and minimalistic style but it is nowhere near boring, there are always details and some movement, a detail that makes you say, “ah, that is a Nihan Peker touch.”

"I don’t shy away from using a bit of glitz and glimmer when appropriate," she says, or from incorporating unexpected and interesting touches. She says she creates pieces with enthusiastic vigor in exuberant forms. But it is never over the top or complex, "the Nihan Peker woman is gracefully stylish," she says.

Peker says her brand is often described as elegant and timeless. For her, as both a designer and a consumer, it’s important that her dresses can last for 5, 6 or 10 years and not just it in her wardrobe to collect dust. Of course, she says, the timeless aspect does not always translate well into bridal gowns.

The key to making something more timeless also lies in the quality of the fabrics used, the stitching and the form, stresses Peker.

"I set out on my design journey to create items that would last wear after wear; not just for the looks but also be sturdy." It's a philosophy that naturally comes when creating pret-a-porter collections.

Peker adopts the same mindset when she shops for herself too. "I’d rather have a few things that last for years than have hundreds of things," she says. She is also a woman of solids, not patterns, and only stick to stripes and dots.

The pandemic did push her to embrace more vivacious and happy colors and she even used brush strokes as her take on a pattern but she says that's as far as she'll go.

When it comes to creating a garment, Peker says the intricate hand-sewn embroidery, getting the fit just right and working day and night may seem tedious and tiring to most but for her, that’s nothing to sweat about, it's something she genuinely enjoys.

"Even when my client and I have different opinions on something, say, the fabric or the form, if I can convey my aesthetic and make compromises we end up meeting in the middle," she says. That's the "biggest" challenge she faces, she says smiling.

Peker may not be inspired by the fashion of the decades, the swinging sixties or the naughty nineties, but cities, people and architecture influence her, she admits.

"I love Istanbul and I love living here. The people, the crowds... The historical peninsula, the sea, the islands, the buildings, they are all so inspiring."