Napoli in Karaköy: Out at Paps Italian 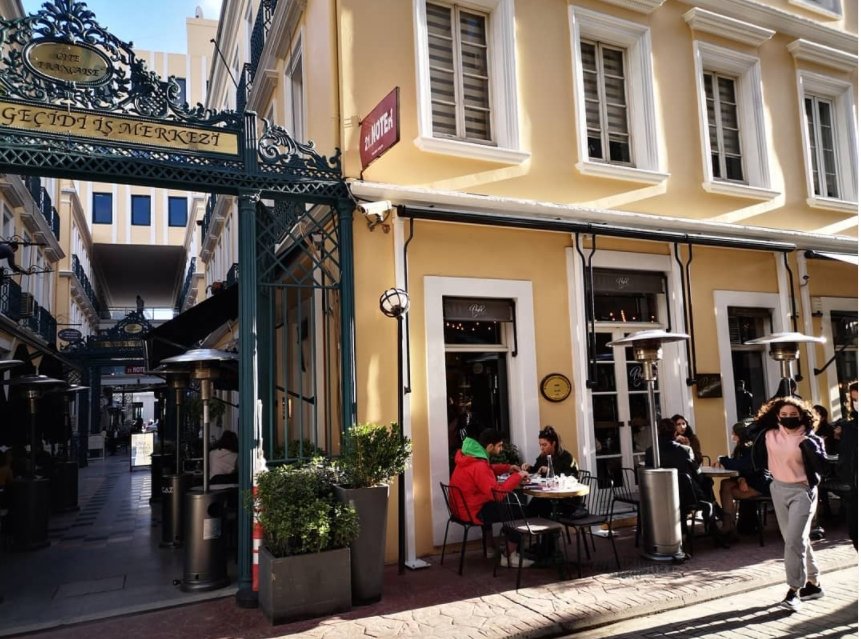 By the French Gateway within the shorefront district of Karaköy, as the construction zones of Galataport are going through the last phase of their historic renovations, Neapolitan fare is on the menu for passersby in the know

The unrivaled elegance of the sculpted metal archways above the French Gateway in Karaköy to its passage of polished marble floors that gleam, reflecting a hallway of storefronts displaying a variety of commodities from the drinkable black gold of espresso cafes to a quirky paper crafts shop and other like-minded ventures piquing the recreational curiosity of locals and travelers alike.

But one of its proudest corners, where foot traffic eases along the bustling and historic pedestrian road, the first location of Paps Italian hosts a casual array of outdoor tables that lead into a modest room, accommodating four to five tables. The cooks can be seen in their bandanas as they deliberate over aged cheeses and variously shaped pasta. The mood is like that of Little Italy at three in the morning, authentic in its vibrantly quaint liveliness.

The air of Paps Italian is every bit as Neapolitan as its founding chef, Luigi Mariconda, who opened his place of business in 2015, to the ravenous joys of practically everyone in sight. And although having also expanded outward to a kitchen in Emaar Square Mall, the homely neighborhood locale of the original spot in Karaköy is perfect for a foggy night along the Bosporus after seeing an art show or simply going for a walk with a loved one.

Like its smiling waitstaff, the ambiance is entirely casual at Paps, where stylish men and women dating in their best beside a bunch of friends letting their hair down or a family of four frazzled after a day in traffic. The menu pricing is sure to be the highlight of the day for anyone who has the opportunity to sit there and order from its tantalizing list of dishes. Organized to its antipasti appetizers, or "Dolci" sweets, there are pasta, pizzas, salads and specials aplenty.

In the older country

Luigi, the head chef at Paps, is affectionately called Gigi, and he lets everyone know he's in charge of the kitchen, not by a show of force but by the exquisite perfectionism in every recipe. Within minutes after uttering the words, a chorus of delectable pasta is liable to appear on the guest's table at Paps, famous for its 40-year sourdough bread, Neapolitan sauces, a tiramisu that Gigi learned from his mother, and many other delights.

As a dense fog descended on the city of Istanbul, the chefs at Paps were preparing a pair of dishes that they do best. The first was a green, or "Verdi" fettuccine with sage butter and parmesan that is aged for 36 months. The softness of the pasta itself, and its richness, infused with aromatic herbs, made for an utterly palatable sensation in every bite, stimulating a gushing Italianate romance complementing the food itself.

From their specials, however, the green fettuccine was well-paired and complemented by the porcini-spiked "ravioli al Tartufo," a dance of wild mushrooms and buffalo-milk burrata that blended effortlessly with the thyme-garnished parmesan, in this case, aged for 24 months, all of which made for a spectrum of commingling tastes. These culinary ingenuities saturated the al dente pasta of the wide, circular homemade truffle ravioli.

The experience of eating such well-made foods essentially slows time because the idea is to savor it, not to consume it all at once, but to let it sit and to go back to it. That is part of the allure of the aged cheeses, perhaps. It acts as a remedy to the horrors of modernity and its runaway pace that there are still traditionalists who stick to the recipes and cooking of their old countries, their families and the memories of their kitchens.

To taste a city

Turkey and Italy share a common food history, as with all countries that border the Mediterranean. But the city of Istanbul, too, is replete with Italian connections. The most obvious, perhaps, is that of the medieval quarter of Galata, where a Genoese colony preserved its distinctive footing with its Ligurian regional past, its cooking held intact at such establishments as Il Cortile.

And there are also other Italian regional food cultures represented in Istanbul, such as at Aromi di Roma in Kadıköy, which swears by Rome's version of pizzas and lasagnas that are, according to their firsthand knowledge, different from that of the Neapolitan or Genoese types. And while the debates rage over how to compare and contrast the varying foods of Italy, the people of Istanbul can sit back and take in the freshness of their country's palate with that of their fellow Italian cooks and kin.