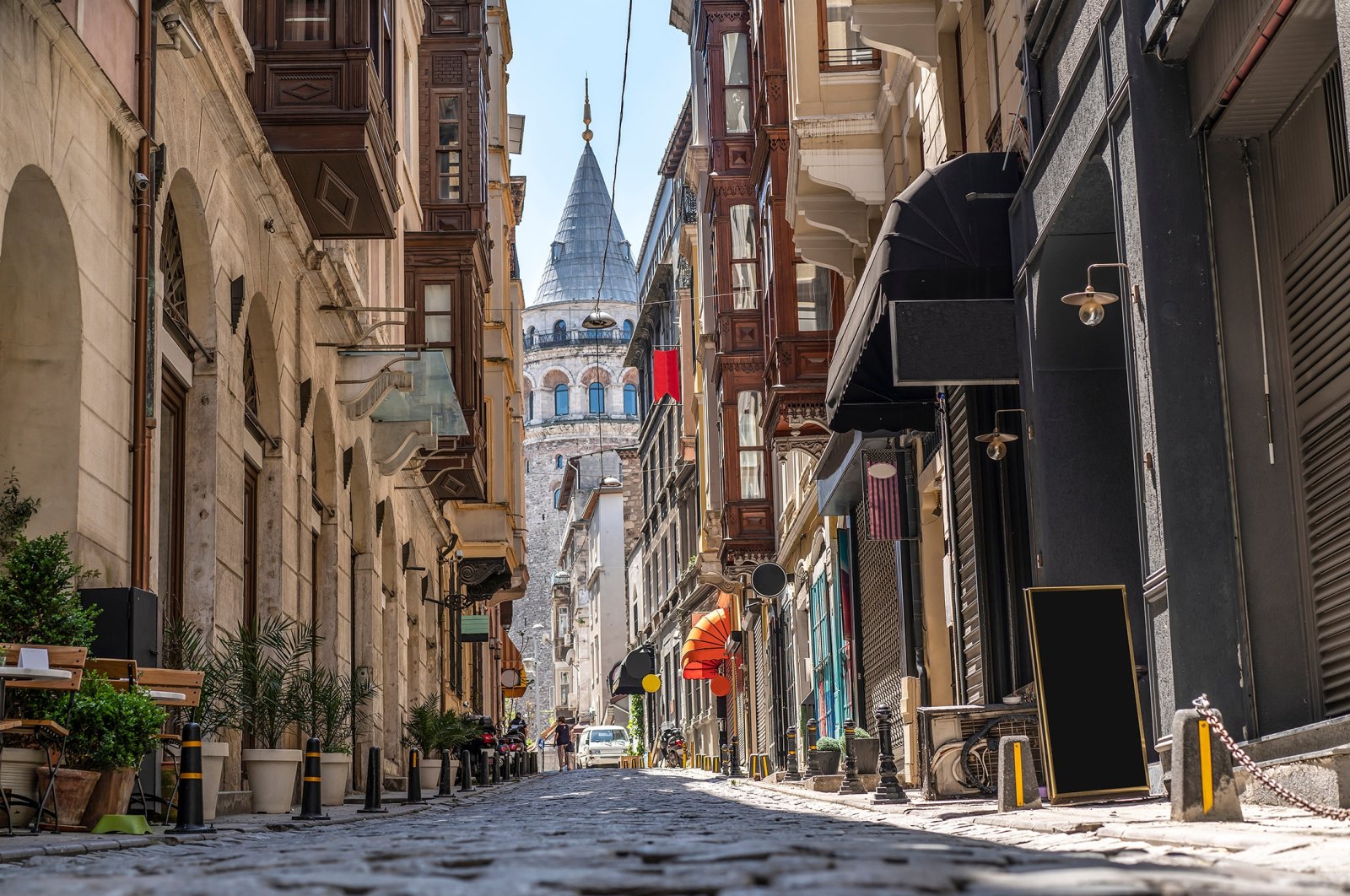 The Galata Tower is seen between historical buildings. (Shutterstock Photo)
by Matt Hanson
Aug 11, 2021 8:34 am

A new restaurant in the heart of historic Galata, where the Genoese colony of old once towered to glory above the skyline of Constantinople, nourishes Istanbul with fresh, Ligurian fare, touched by Turkish refinements

A high point of architectural renovation in concert with the medieval airs of its historic environs, newly opened on July 1, the ristorante and pizzeria Il Cortile is a classy dash of an eatery in the shadow of the Galata Tower. Its entrance is a subtle hall, quiet, almost inconspicuous, but through it leads to a mesmerizing lushness of brick and wood, facades of stone that recall the breadth of Italian settlement on lands once feared and hailed as the beating lifeblood of the Eastern Roman Empire.

While on the steep end, its staff demonstrates an extraordinary degree of attention, leaving clientele to revel under the balmy balconies of the École St. Pierre Hotel, a namesake harkening back to the network of French schools that dot the cityscape about the downtown neighborhoods of European Istanbul. And at once, the tangible heritage of the building is announced in bold text, accompanied by images that detail the resonance of past epochs reverberating through its masonry like the Francophone choirs that would practice in its midst.

On first arriving, the host warns with a caveat, stating quite clearly, yet not without a soft smile, that the kitchen is not Turkish, in fact, but Italian. It is, perhaps, a must to disclose such information to guests who would otherwise have wandered in search of something more authentic to the overarching national culture. But that is exactly what Il Cortile offers, with all of the sophistication of Italy’s globally renowned legacy of dining, namely, the deep-rooted Genoese foundation of the urban infrastructure, going back to the 14th century and still intact today.

Although mostly demolished by the district’s municipality in the 19th century, today’s sleekly streamlined, commercialized features have preserved something of the aesthetic that screams Middle Ages, however, whitewashed and decorated for contemporaries to relish in the myths of their neighbor’s long lost ancestors. And when day wanes to night, as the lighting dims, Il Cortile comes alive with the scent and sound of utterly masterful cookery, where Ligurian, Mediterranean, Anatolian, Aegean, Italian and Turkish cuisines commingle.

In the midst of the intense summer heat that rolls Turkey to a full boil, and has become all the more bitter as fires rage in the photogenic south, salads are a saving grace on everyone’s table, despite class differences. Whether hanging from a bay window for a few sprigs of parsley, or ordering up a wide bowl of mixed greens weighed with cheeses, nuts and fruits, there is a common denominator in the cool freshness that Turkey’s agriculture provides, regardless of how it might end up within the specific cultural tradition of its preparation.

A particularly spectacular blend of nourishing ingredients, raw and cultivated for a unitary effect on the tongue, is that of the “insalata con formaggio caprino,” which translates from the Italian as “salad with caprino cheese.” The variety of caprino is served aged or fresh, and has a vast range of regional and production specificity. At Il Cortile, it is garnished with a layer of caramelization, gleaming and crispy with a sticky allure. And with a soft, bread-like texture underneath, it is the centerpiece of the salad, which also features seared nectarines.

“Insalata con formaggio caprino” is essentially the presentation of its cheese, because, while the bitter orange sauce poured throughout may have enlightened its greens, they are decidedly unfulfilled, even if punctuated with walnut. The simplicity, while tempting, is not in perfect balance with the sophistication of its core value, a mere emblem of Italy’s diverse and classic dairy culture. There are two other salads on the list at Il Cortile that do offer one of Istanbul’s best kept verdurous secrets, that of the harvest of its heirloom Yedikule gardens.

Together with a robust, appetizing salad, Il Cortile appears to be an ideal spot for the art of the pizza, a craft that Italy has gifted to the world in incalculable measure, and which Istanbul’s foodies are enthused to maintain to a high standard within their localities. A choice like the “Alle verdure,” with its medley of zucchini, tomatoes, capsicum, eggplant, black olives and fresh basil, is as Mediterranean as it gets, seemingly as natural to the environment in Turkey as it is in Italy.

Yet, the beauty of life unfolds especially once every loose end has been tied, hunger satiated, thirst quenched, and all that is left is to overwhelm the senses with something of extraordinary delight. A word that comes to mind is delectation, for the peak of deliciousness that ensues in the midst of Italian desserts, when flavored and layered with the sweetness of the Turkish palate. Itemized first on the sweet list of Il Cortile is that of the “Soufflé di castagne” or the chestnut souffle.

It comes out on a glazed ceramic pan, with a handle that glows soft in the low light, and although piping hot, even in the midsummer haze it is irresistible, for its fusions of caramel and chestnut, the consistency of its nut flour like a rich lathering of melted butter, but it gives back and asks for more. And topped with a thin, curved cookie flavored with mastic, the souffle is reinvented, adapted to the redolence of life in Turkey, and as it has wafted from across the western seas of the Aegean, encompassing the fruits of the Italian kitchen.