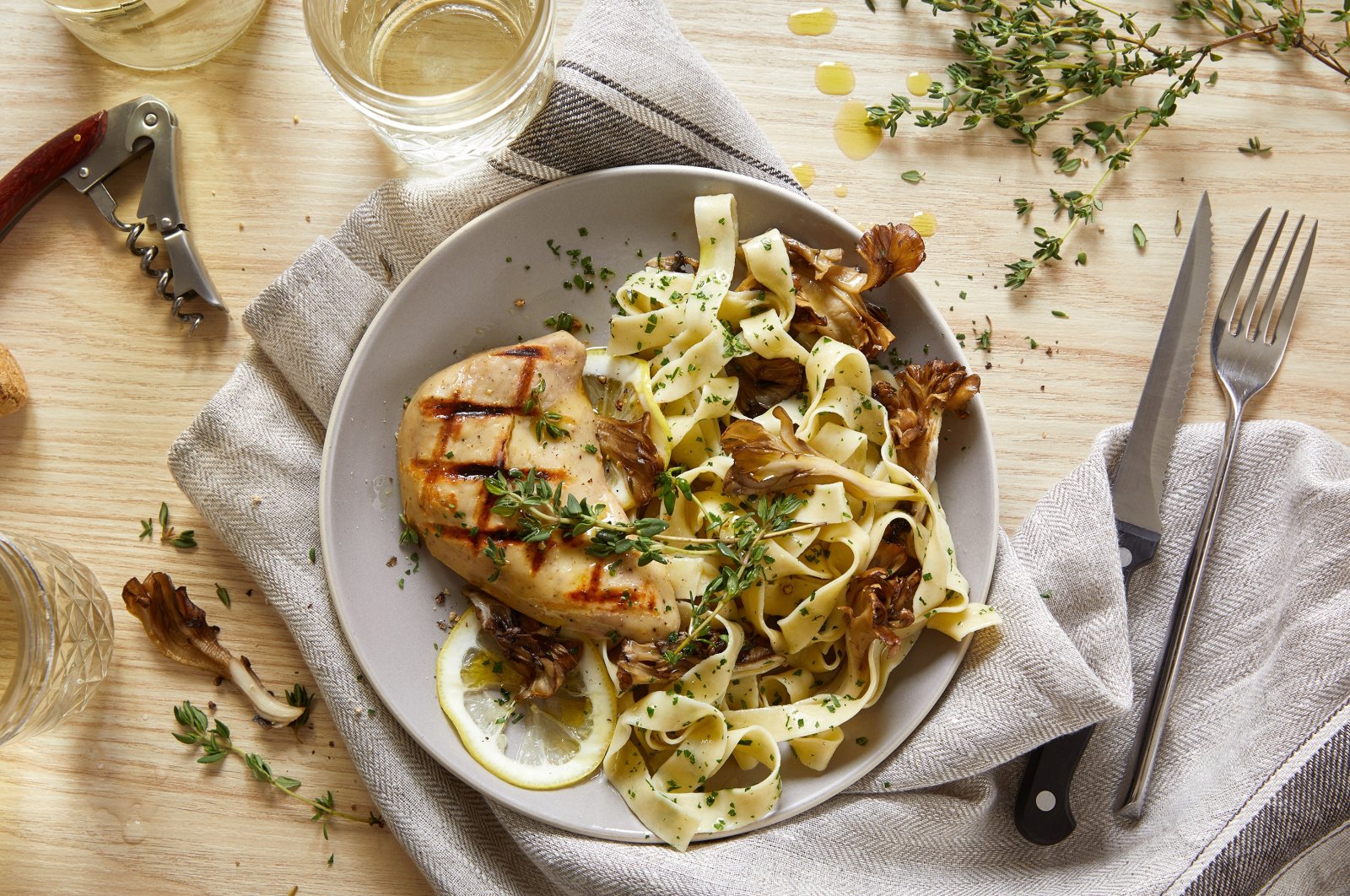 A dish made with lab-grown cultured chicken developed by Eat Just is pictured in this handout photo. (Eat Just, Inc./Handout via REUTERS)
by Agencies Dec 03, 2020 10:55 am
Edited By Yasemin Nicola Sakay
RECOMMENDED

Lab-grown chicken will soon be available in restaurants in Singapore after the country became the first to greenlight meat created without slaughtering any animals.

U.S. startup Eat Just said Wednesday that its meat had been approved for sale in the city-state as an ingredient in chicken nuggets. The news marks a "breakthrough for the global food industry," said the company, as firms increasingly try to find less environmentally harmful ways of producing meat.

"I'm sure that our regulatory approval for cultured meat will be the first of many in Singapore and in countries around the globe," said Josh Tetrick, co-founder and CEO of Eat Just.

Consumption of regular meat is an environmental threat as cattle produce methane, a potent greenhouse gas, while logging forests to make way for animals destroys natural barriers against climate change.

Demand for alternatives to regular meat is surging due to concerns about health, animal welfare and the environment. Plant-based substitutes, popularized by the likes of Beyond Meat, Impossible Foods and Quorn, have been increasingly featured on supermarket shelves and restaurant menus.

There were concerns that lab-grown varieties would be too expensive, but a spokesman for Eat Just said the company had made "considerable progress" in lowering the cost.

"Right from the start, we will be at price parity for premium chicken at a high-end restaurant," he told Agence France-Presse (AFP). He did not reveal the price of the nuggets but said they would be launched soon at a Singapore restaurant before other products – including chicken breasts with lab-grown meat – are rolled out.

Eat Just hopes to bring down the cost to below that of conventional chicken in the coming years, the spokesman added.

The company conducted more than 20 production runs in 1,200-liter (317-gallon) bioreactors to make the chicken alternative, and checks on safety and quality showed that its "cultured" product – the term for meat grown in labs from animal cells – met food standards.

Meat consumption is projected to increase more than 70% by 2050, and lab-grown alternatives have a role to play in ensuring a secure food supply, Eat Just said.

"Working in partnership with the broader agriculture sector and forward-thinking policymakers, companies like ours can help meet the increased demand for animal protein as our population climbs to 9.7 billion by 2050," Tetrick said.

Globally more than two dozen firms are testing lab-grown fish, beef and chicken, hoping to break into an unproven segment of the alternative meat market, which Barclays estimates could be worth $140 billion by 2029.

The Singapore Food Agency, the city-state's regulator, confirmed it had approved the sale of Eat Just's lab-grown chicken in nuggets after concluding it was safe for consumption. The high-tech city-state has become a hub for the development of sustainable foods, with startups producing goods ranging from lab-grown "seafood" to dumplings made with tropical fruit instead of pork.

William Chen, a Singapore-based scientist and member of an expert panel that advises the regulator, said food security was a key concern in the city-state's drive for developing meat alternatives.

Singapore "has virtually no agriculture, we import more than 90% of our food from overseas," said Chen, director of Nanyang Technological University's food, science and technology program.