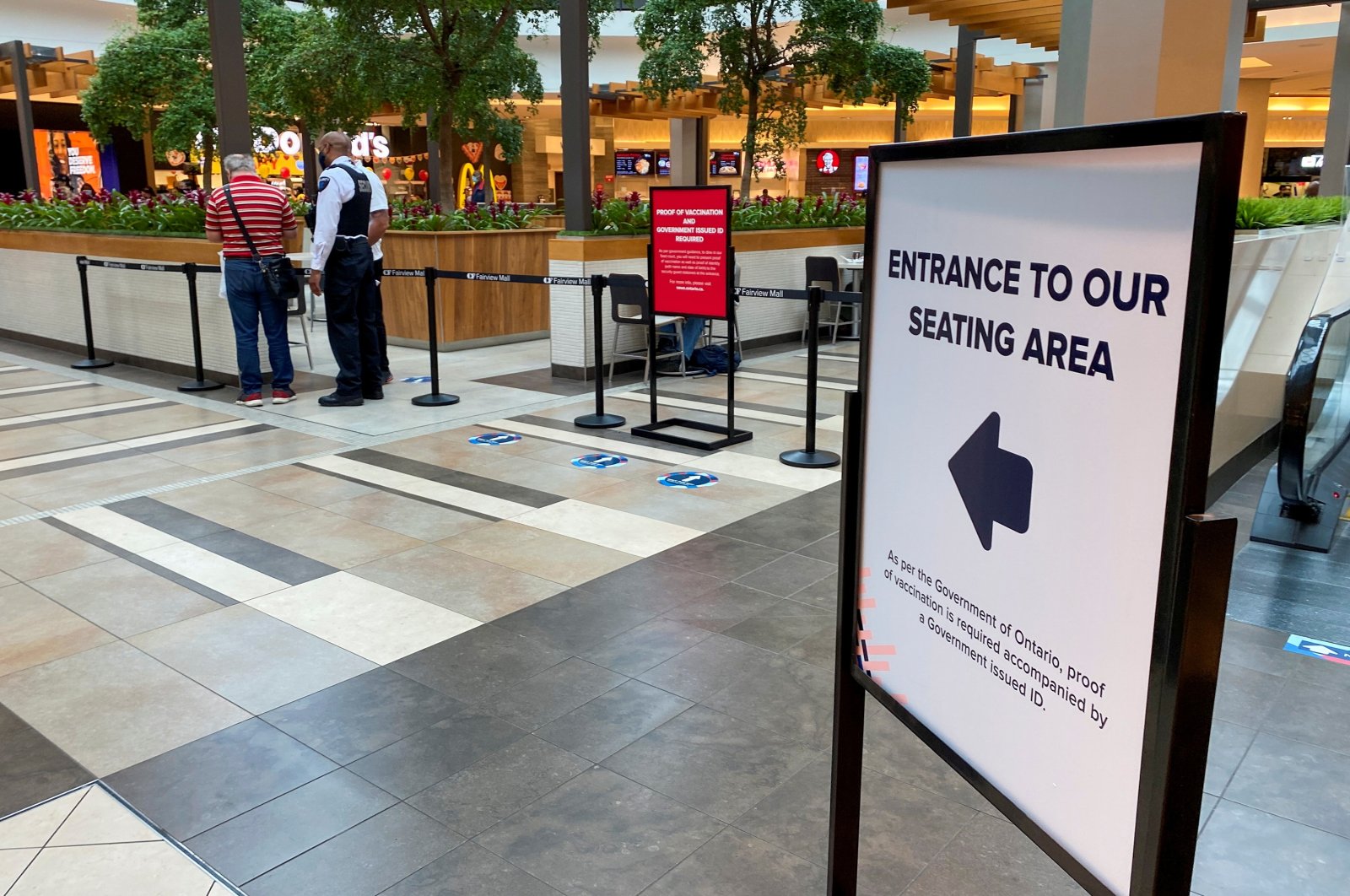 A security guard checks for proof of vaccination at the entrance to a food court during phase one of Ontario's vaccine certification program in Toronto, Ontario, Canada, Sep. 22, 2021. (Reuters Photo)
by French Press Agency - AFP Nov 25, 2021 11:56 am
RECOMMENDED

Along with a few countries including Israel and the United States, Canada started immunizing children aged 5-11 against COVID-19 Wednesday.

At Montreal's convention center, a few dozen youngsters were among the first to receive the Pfizer doses authorized since last Friday for this age group.

To help ease their fears of needles, additional measures have been taken such as posting stickers of unicorns or hockey players on partitions between nursing stations, longer appointments than for adults, and a dog to pet.

"I was not really scared, but I was stressed," Victor, 10, told Agence France-Presse (AFP), gripping a coloring page with the words "bravo, you received your vaccine" in his hands.

At his side, his mother Mathilde explains that he felt "excluded" from his family, being the only one who had not yet been vaccinated against COVID-19.

For her, having her son vaccinated made sense, if only to "be together" and "be able to hug her grandparents" without fear.

"We are privileged, frankly," added Yanouchka Labrousse, a doctor and mother of two vaccinated children.

Appointments for children in Quebec have been spiking since the government gave the green light to pediatric vaccination, "which is an indicator that the response of the population is really excellent," commented Jean-Nicolas Aube, spokesperson for the Montreal health authorities.

On Twitter, Quebec Premier Francois Legault was delighted Wednesday morning to note that 115,300 appointments were made in a few hours. "It is together that we can make a difference!" he said.

In neighboring Ontario, a handful of children were vaccinated Tuesday in Toronto due to early delivery of doses. Canada's most populous province is set to officially begin its campaign on Thursday.

"This is a first in Canada and the start of thousands of kids in Toronto getting the best protection possible against COVID-19 over the coming weeks," Toronto mayor John Tory said in a statement.

On Wednesday the mayor appeared at a clinic alongside Polkaroo, a green kangaroo-like character from a local children's television show, to announce that more than 31,000 children's vaccine appointments had been logged so far.

Canada has one of the highest vaccination rates in the world against COVID-19, with over 85% of people over the age of 12 having rolled up their sleeves twice.

Health Canada on Wednesday also approved the use of Johnson & Johnson's single dose vaccine for people 18 years or older.