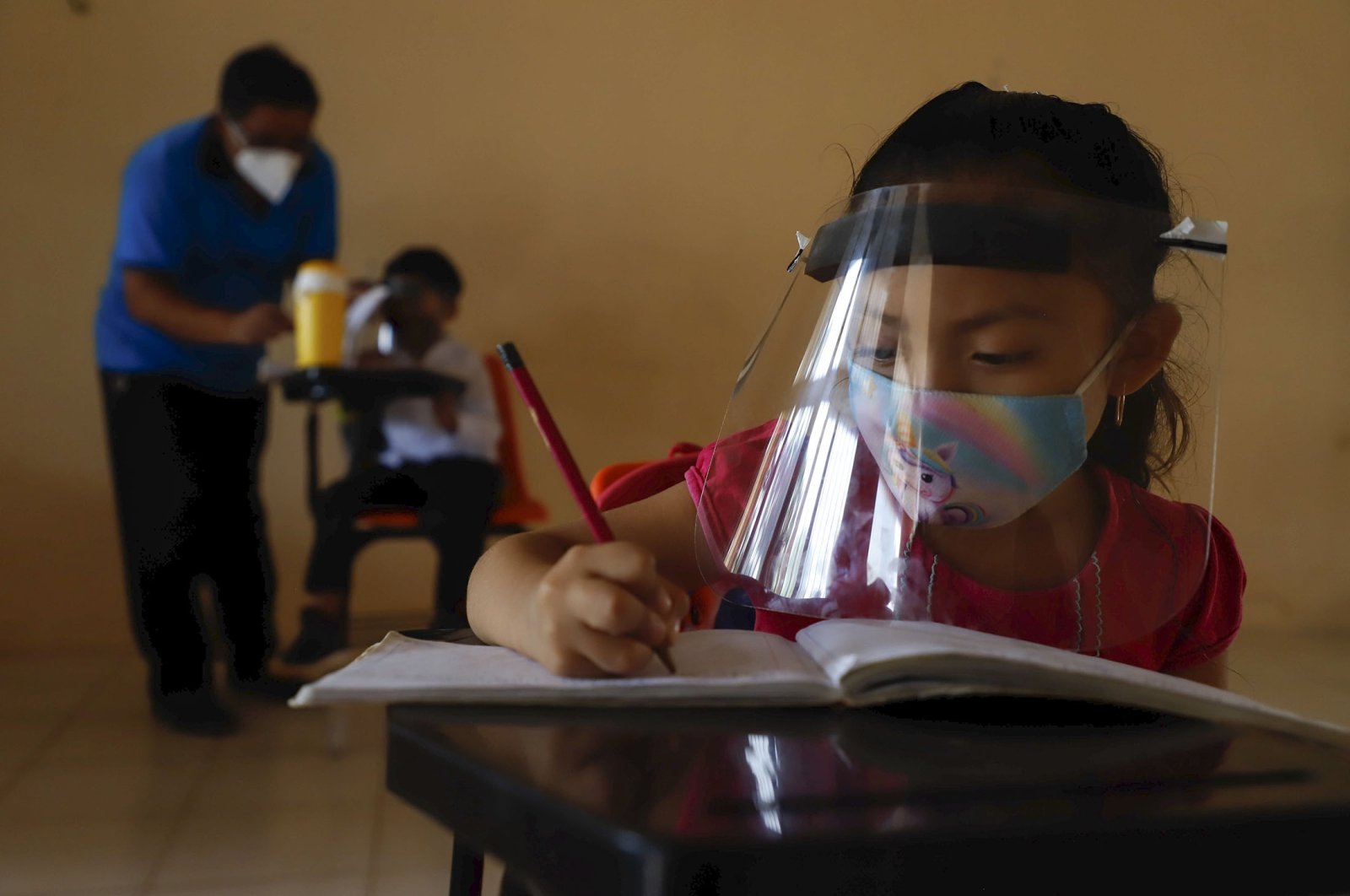 A 10-year-old girl wearing a mask and a face shield writes in her notebook during the first day of class at the Valentin Gomez Farias Indigenous Primary School in Montebello, Hecelchakan, Campeche state, Mexico, April 19, 2021. (AP Photo)
by Daily Sabah with AA Jan 05, 2022 9:32 pm
RECOMMENDED

With the rise of the highly infectious omicron variant of COVID-19 and the increase in seasonal infections, respiratory diseases in children have seen a marked surge in Turkey in recent times as experts suggest the midterm break in schools should be brought forward and extended.

There is an increase, in the winter season, in infections such as influenza, respiratory syncytial virus (RSV), parainfluenza, rhinovirus, metapneumovirus, rotavirus and adenovirus in children. Families are also increasingly applying to emergency services, worried about COVID-19, due to diseases with similar symptoms.

This situation has recently started to cause long queues in front of pediatric emergency services.

It is stated that daily pediatric patient admissions in university hospitals due to these infections has increased by four to five times, and the number reached 1,500 to 2,000 in state hospitals with higher capacities, compared to previous years during this season.

Professor Haluk Çokuğraş, from the Department of Pediatrics of Istanbul University Cerrahpaşa Faculty of Medicine, stated that an increase is observed in this season every year during the winter months, but this year there was an increase that started in August and peaked toward the end of December.

Çokuğraş pointed out that the pandemic played a big role in this.

"There is a significant increase not only ın COVID-19 and the omicron variant, but in all of them, in influenza or flu, in many other viruses that cause illness in the cold season like RSV, rhinoviruses and parainfluenza viruses. I describe it as 'All respiratory viruses have banded together to attack children in schools.' This is a bit of an exaggeration, but we are under a serious attack," he told Anadolu Agency (AA).

Çokuğraş touched upon the daily number of patients in Cerrahpaşa Pediatric Clinic.

"This season, normally 80 to 90 patients apply to the emergency room a day, but in the last one or two weeks, this number has reached 350 and even started to pass it," he warned.

He explained that COVID-19, influenza and other viruses that cause respiratory tract disease in children cause more or less similar symptoms such as fever, weakness, runny nose, cough and muscle aches, and that families take their children with such symptoms to the hospital.

Çokuğraş stated that this is a serious burden on pediatric emergency services.

"I'm talking about 350-odd daily cases in Cerrahpaşa, but I know that there are 1,500 to 2,000 cases a day that apply to the emergency departments in state hospitals. Due to the pandemic, such situations are expected. Especially the omicron variant is very common among children and young people, and on top of that, the addition of influenza cases significantly increased the number of emergency department admissions," he explained.

Emphasizing that these infections are seen in all age groups in children, Çokuğraş noted that despite the pandemic measures taken in schools, children could not pay enough attention to masks, distance and hygiene, and that respiratory tract diseases increased in kindergartens and schools.

Çokuğraş made recommendations to the families of children with seasonal infections.

"Children who show signs of respiratory disease should not be sent to school. Some tests need to be done to distinguish whether they have COVID-19, as these children need to be isolated. In younger age groups, COVID-19 passes with mild symptoms, influenza may show more severe symptoms.

"Depending on which virus caused the disease, there are a number of different treatment methods, but in general we do not use antibiotics for viruses. We use a number of simple drugs, which we call symptomatic treatment, such as antipyretic and nasal drops. But viral diseases are (generally) self-healing diseases," he said.

Emphasizing the need to be careful about wearing a mask during this period, Çokuğraş recommended that parents ensure that both they and their children wear masks correctly, ventilate indoor environments, and not spend a long time indoors as much as possible.

Çokuğraş stated that in this environment, it may be right to maybe not order the closure of schools but take the semester holidays a little forward.

"In order to get through this period a little more easily, maybe taking the semester break a little bit forward and extending it for another week may provide a temporary solution," he said.