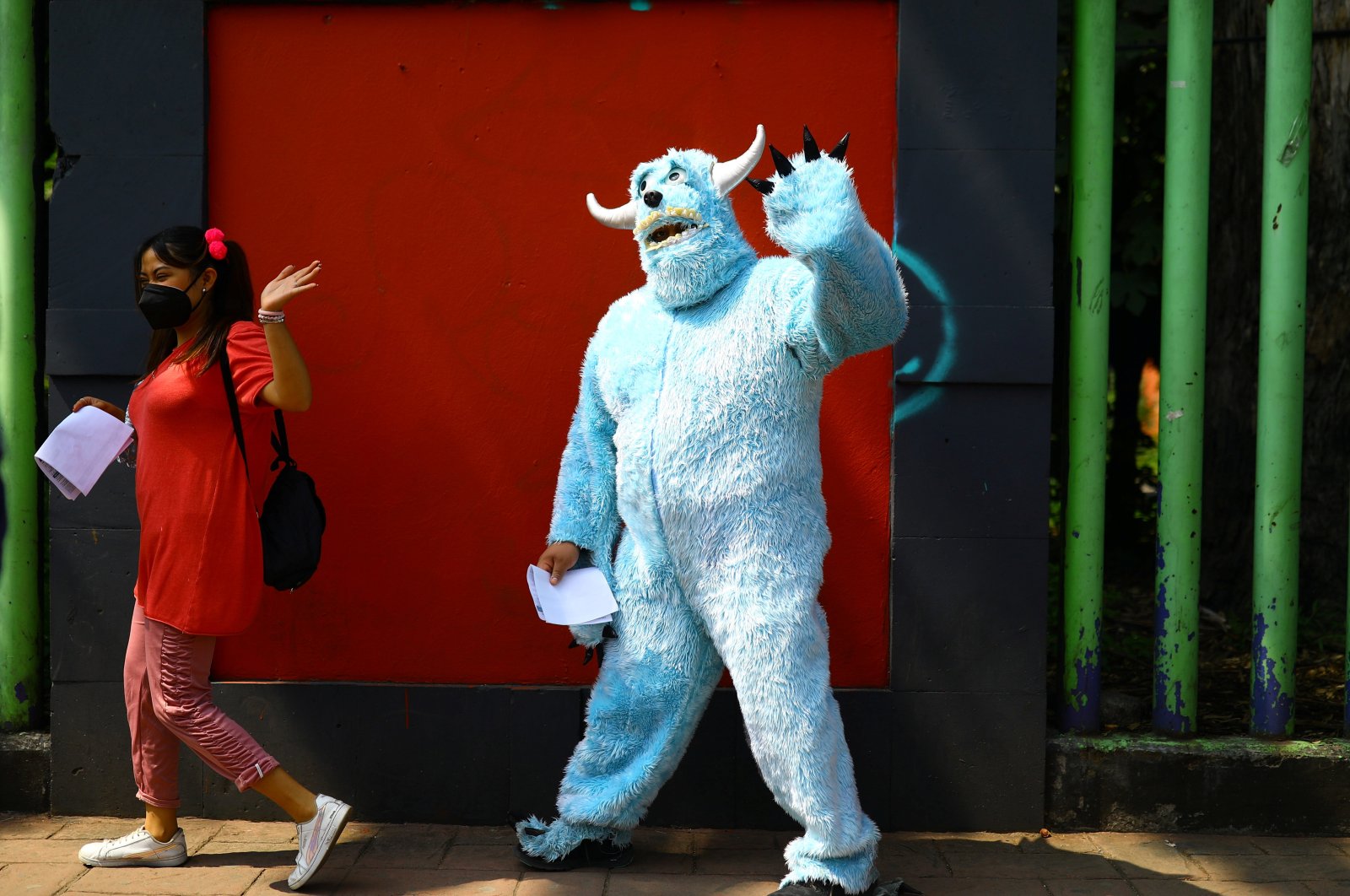 A person in a costume gestures while walking in a line to receive a dose of the Pfizer vaccine against COVID-19 during a mass vaccination for people from 18 to 29 years old, in Xochimilco, on the outskirts of Mexico City, Mexico, August 19, 2021. (Reuters Photo)
by reuters Aug 22, 2021 10:10 am
RECOMMENDED

This week's roundup of the latest scientific research on the coronavirus and efforts to find treatments and vaccines suggest that during the first wave of the pandemic, more than one in ten COVID-19 patients in the U.K. caught the virus while they were in the hospital for other reasons and that children's noses may be better than adults' at defending against infection because of "pre-activated" immunity against the coronavirus.

A third dose of an mRNA COVID-19 vaccine provided immunocompromised organ transplant patients with "substantially" improved protection, according to a trial published on Wednesday in The New England Journal of Medicine. To keep the body from rejecting transplanted organs, patients must take medications that suppress the immune system. Previous studies have shown that two doses of the vaccines were not enough to produce good immune responses in these patients. In the new trial, researchers found that 60% of patients who were given a third dose of the Moderna mRNA vaccine developed antibodies that could neutralize the virus, compared to only 25% in the placebo group. The extra dose, which was administered two months after the second dose, was well tolerated with mostly mild side effects, and it also prompted substantial improvement in patients' T-cell responses, another aspect of immunity. The results "quite convincingly" suggest that a third shot is worthwhile for transplant patients, said coauthor Dr. Atul Humar of the University Health Network in Toronto. On Thursday, the U.S. Food and Drug Administration authorized vaccine boosters from Pfizer/BioNTech and Moderna for people with compromised immune systems.

During the first wave of the pandemic, more than one in ten COVID-19 patients in the U.K. caught the virus while they were in the hospital for other reasons, researchers reported on Thursday in The Lancet. The study was based on data from 314 hospitals related to diagnoses that were made before August 2020. Dr. Chris Green of the University of Birmingham, who coauthored the report, said in a statement that the early lack of resources – such as rapid, reliable tests for the virus, personal protective equipment, and isolation facilities – and "under-appreciation of the role of airborne transmission" contributed to the U.K.'s high rate of hospital-acquired COVID-19. In the United States, doctors at a large New York cancer hospital found less than 1% of patients became infected while hospitalized from March 2020 through February 2021, according to a study published last month in Clinical Infectious Diseases. Separately, a large Harvard University teaching hospital reported just one case of hospital-acquired COVID-19 among 8,370 patients during the first four months of the pandemic, thanks to "rigorous infection control measures." The doctors reported in JAMA Network Open last September, "These results, especially if replicated at other U.S. hospitals, should provide reassurance to patients."

Nearsightedness on rise in kids during pandemic

A study of 6- to 8-year-olds in Hong Kong found the proportion of children with nearsightedness, or myopia, increased from 19.4% at the start of the pandemic to 35.3% eight months later. The researchers reported in the British Journal of Ophthalmology that the average amount of time children spent outdoors fell from about 90 minutes a day to less than half an hour, and the total time they spent on close visual work increased from about 3.5 hours a day to about 8 hours, driven largely by a surge in screen time. The study cannot prove that pandemic-related changes, such as the closure of schools, caused the higher myopia rates. Still, time spent outdoors "has been consistently shown by multiple studies" to protect against myopia, said coauthor Jason Yam of the Chinese University of Hong Kong. "Our results serve to warn eye care professionals, and also policy makers, educators and parents, that collective efforts are needed to prevent childhood myopia."

Children's noses are "pre-activated" to fight the virus

Children's noses may be better than adults' at defending against infection because of "pre-activated" immunity against the coronavirus, a new study suggests. Researchers analyzed nasal swabs from 45 infected patients, including 24 children, and from 42 healthy individuals, including 18 children. In nasal-lining cells and immune cells from the children's swab samples, they saw higher levels of genetic material that can sense the presence of the virus and trigger the immune system to defend against it. Higher amounts of these sensors result in stronger early immune responses in children than in adults, according to a report published on Wednesday in Nature Biotechnology. The nasal samples from the children were also more likely than adult samples to contain immune cells known as T-cells that play roles in fighting infection and in developing long-lasting immunity, the researchers found. Ultimately, the authors concluded, the effects may lead to a reduction in the ability of the virus to reproduce and help children to clear it from the body faster. "In fact," they added, "several studies already showed that children are much quicker in eliminating SARS-CoV-2 compared to adults, consistent with the concept that they shut down viral replication earlier."