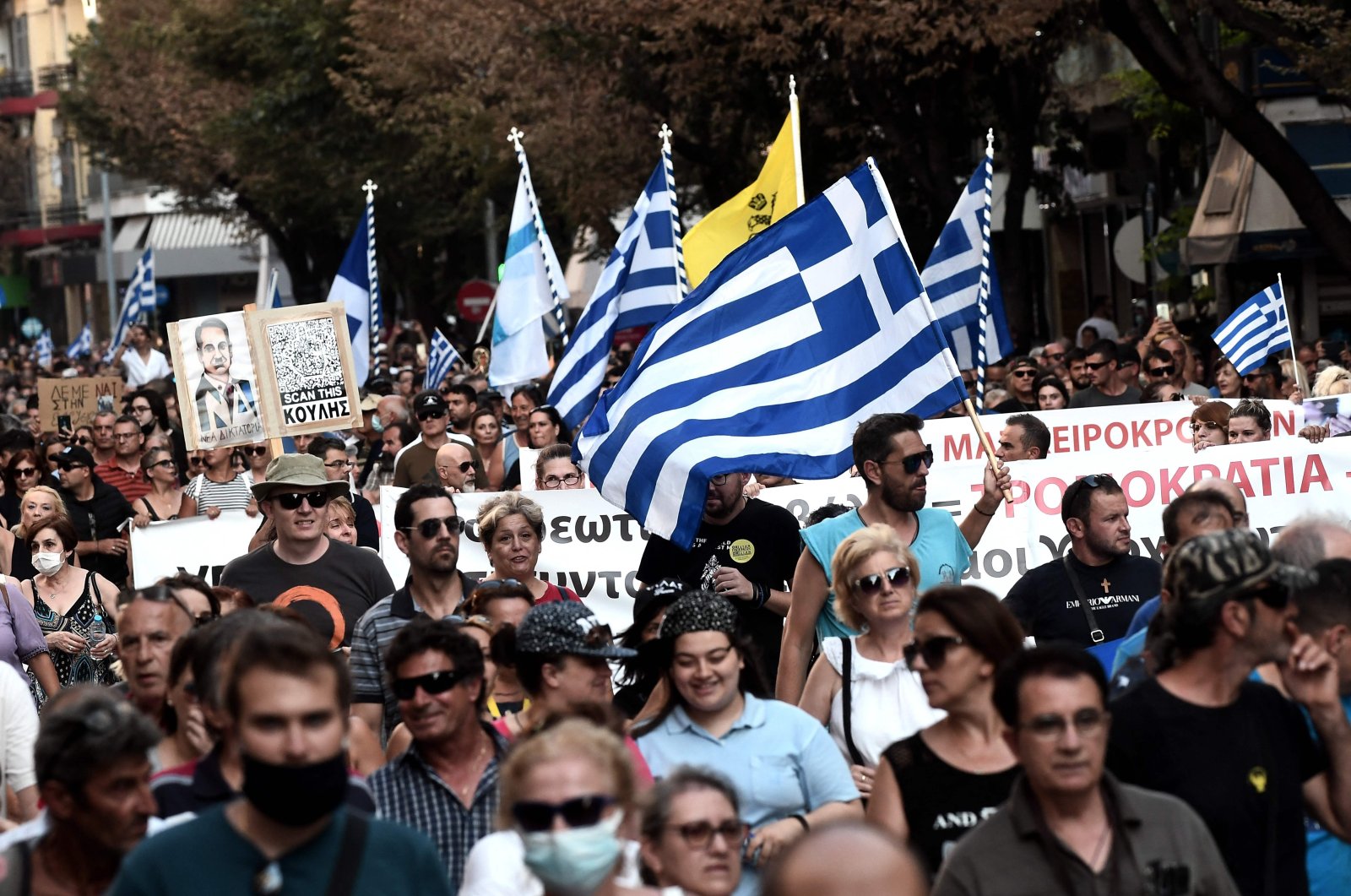 Thousands of COVID-19 skeptics in Greece continue to express simmering frustration and opposition to the country's pandemic restrictions, pulling children out of schools and circulating claims of "fake news."

Giannis Sariannidis, a 37-year-old Greek trader, does not believe there's a pandemic. He's so furious with the restrictions that he pulled his son out of school. Then he got arrested.

Like thousands of COVID-19 deniers in the country, especially in the north, he opposes government rules on masks and tests, at all costs.

"There is no pandemic," he insists, branding as "genocide" requirements that his 8-year-old son submit to self-testing twice a week and mask-up at school because Greece currently offers no vaccinations to children under 12.

In northern Greece, vaccination rates in some areas are lower than 50%, compared to the national average of 63%, while doctors say hospital ICU units have reached capacity.

Teachers, doctors and nurses have been hit with lawsuits from untrusting members of the public and infection rates are growing.

Yet Sariannidis is unrepentant. "We have nothing to fear. It is an inalienable right of every citizen on earth to be free. The wealth and land belong to us," he told Agence France-Presse (AFP) from the northern city of Thessaloniki.

Last month, he was arrested after causing a commotion at his child's school over COVID-19 rules and sentenced to 15 months in prison with a three-year suspension. In court, he told judges that he did not recognize their authority.

While anti-vax sentiment spans the world, in Greece observers say it is strongest in the north, traditionally considered a heartland of fervent nationalists and religious hardliners susceptible to conspiracy theories.

Forty percent of new cases recorded on Tuesday were in the north, the public health agency said, even though the region accounts for only 3.1 million of Greece's 10.7 million population.

"There is great pressure on the national health system in northern Greece," Prime Minister Kyriakos Mitsotakis told the Cabinet on Thursday.

New cases in Greece are now topping 6,000 on a daily basis for the first time since the pandemic began, hitting a new record of more than 6,800 on Thursday.

Nationwide, more than 16,000 people have died as a result of the virus. Around the world, the number is more than 5 million.

Ioanna, a high school teacher in the northern prefecture of Pella, said one student's parent refused to let their child submit to a COVID-19 test "because, as he said, the swab contains carcinogens."

"He was threatening us with lawsuits for torture against his child and the police had to intervene," she told AFP.

Last month in Thessaloniki, a local prosecutor ordered the transport to a hospital of a 14-year-old girl with severe COVID-19 symptoms, overruling her parents' wishes.

"Almost every day we see cases of patients refusing to be intubated," said Nikos Kapravelos, director of one of the intensive care units at Papanikolaou Hospital in Thessaloniki.

"They accuse us of deliberately putting them at risk of hospital infections because we want them dead," Kapravelos added.

The Orthodox Church of Greece, whose influence is particularly strong in rural areas, officially encourages worshippers to get vaccinated and heed government safeguards, but bishops are divided and parish clerics mostly act at their discretion.

Under new rules announced this week, the unvaccinated are not required to produce a negative test to enter a place of worship.

At a religious ceremony last month, the bishop of the northern city of Grevena was caught on camera lowering the masks of dignitaries before allowing them to kiss a cross.

"What should I be afraid of here in church? God protects us," 60-year-old Chryssa Karypidou said at a recent religious festival to honor Thessaloniki's patron Saint Demetrius.

"In the first quarantine the message was more coherent, but fear was also a driving force for observance," says Antonis Gardikiotis, associate professor of social psychology and media at Aristotle University of Thessaloniki.

"Then there were contradictory messages, resulting in a gap that sowed confusion," he adds.

An "overload" of information about the pandemic can also create negativity, and frequent media references to fake news may also have the opposite effect, Gardikiotis warns.

Recent protests against COVID-19 restrictions in Thessaloniki as well as the capital Athens have degenerated into clashes with riot police.

"It's all lies," says Kostas, a retired police officer who along with his wife have taken part in protests in Thessaloniki.

"All the evidence is posted on the internet. If you drink herbal tea and pay attention to your diet, you have no reason to be afraid, or get vaccinated," he adds.