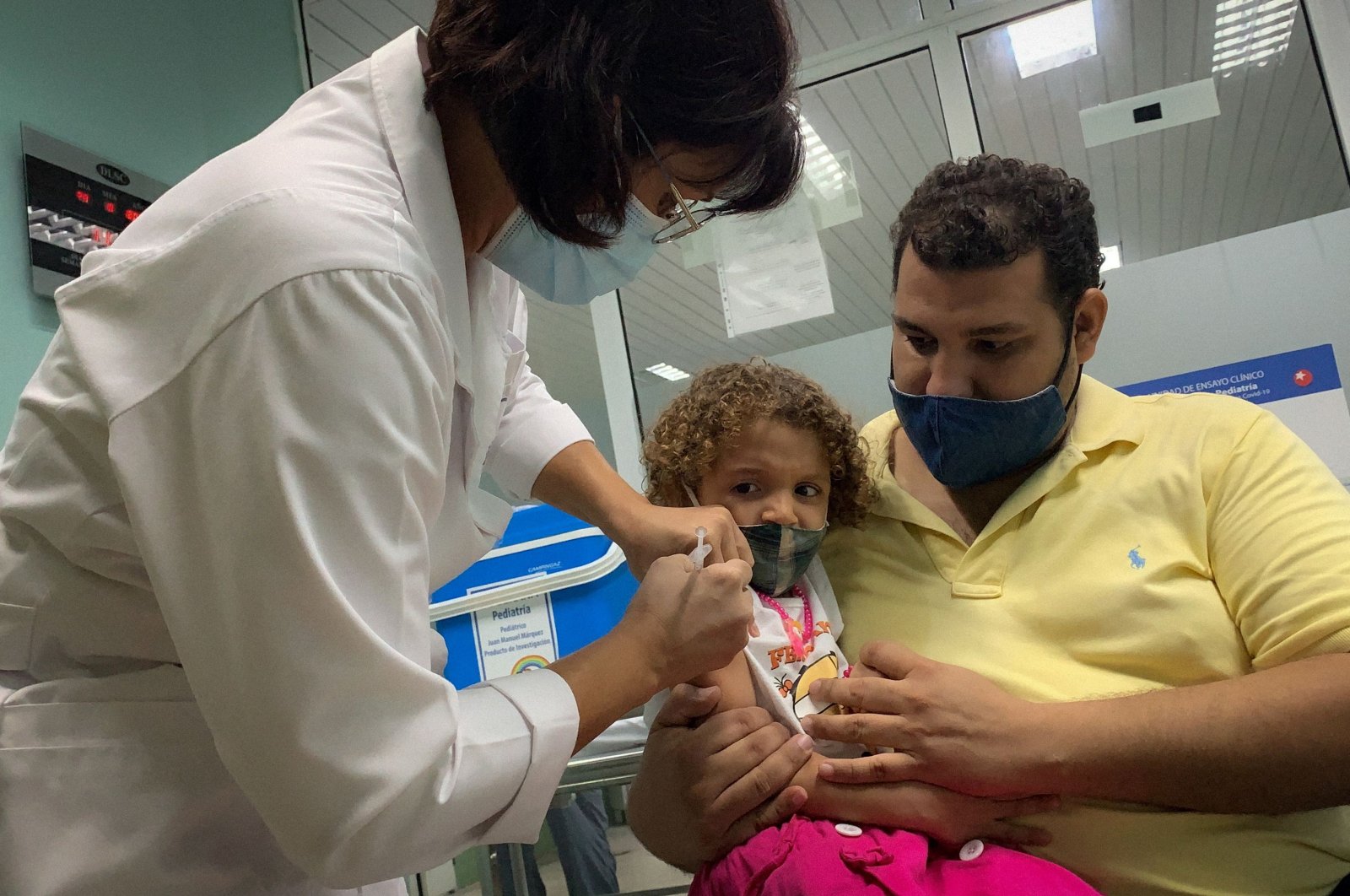 Pedro Montano holds his daughter Roxana Montano, 3, as she is inoculated against COVID-19 with Cuban vaccine Soberana Plus, at the Juan Manuel Marquez hospital in Havana, Cuba, as part of a vaccine study in children and adolescents, Aug. 24, 2021 (Adalberto Roque / AFP Photo)
by French Press Agency - AFP Sep 07, 2021 11:10 am

In its continued struggle against rising COVID-19 cases, Cuba became the first country in the world to vaccinate children as young as 2 on Monday, using domestically developed vaccines as countries scramble to resume in-person education.

The communist island of 11.2 million people aims to inoculate all its children before reopening schools that have been closed for the most part since March 2020.

The new school year started Monday, but from home via television programs, as most Cuban homes do not have internet access.

Having completed clinical trials on minors with its Abdala and Soberana COVID-19 vaccines, Cuba kicked off its inoculation campaign for children Friday, starting with those 12 and older.

On Monday, it started distributing jabs in the 2-11 age group in the central province of Cienfuegos.

Several other countries in the world are vaccinating children from the age of 12, and some are conducting trials in younger kids.

Countries such as China, the United Arab Emirates and Venezuela have announced they plan to vaccinate younger children, but Cuba is the first to do so.

Chile Monday approved the Chinese Sinovac vaccines for children between 6 and 12.

The Cuban vaccines, the first developed in Latin America, have not undergone international, scientific peer review.

They are based on recombinant protein technology – the same used by the United States' Novavax and France's Sanofi jabs also awaiting World Health Organization (WHO) approval.

Unlike many other shots in use, recombinant vaccines do not require extreme refrigeration.

The majority of schools in Cuba have been closed since March 2020, reopening for a few weeks at the end of last year before closing again in January.

The government has announced schools will reopen gradually, in October and November, but only after all children have been vaccinated.

United Nations agency UNICEF has called for schools worldwide to reopen as soon as possible, as "the long-term costs of closures are too high and hard to justify."

Cuba has seen an explosion in COVID-19 infections in recent months, putting pressure on its health system.

Of the 5,700 coronavirus deaths recorded since the outbreak started, nearly half were in the last month alone, as were almost a third of all reported cases.