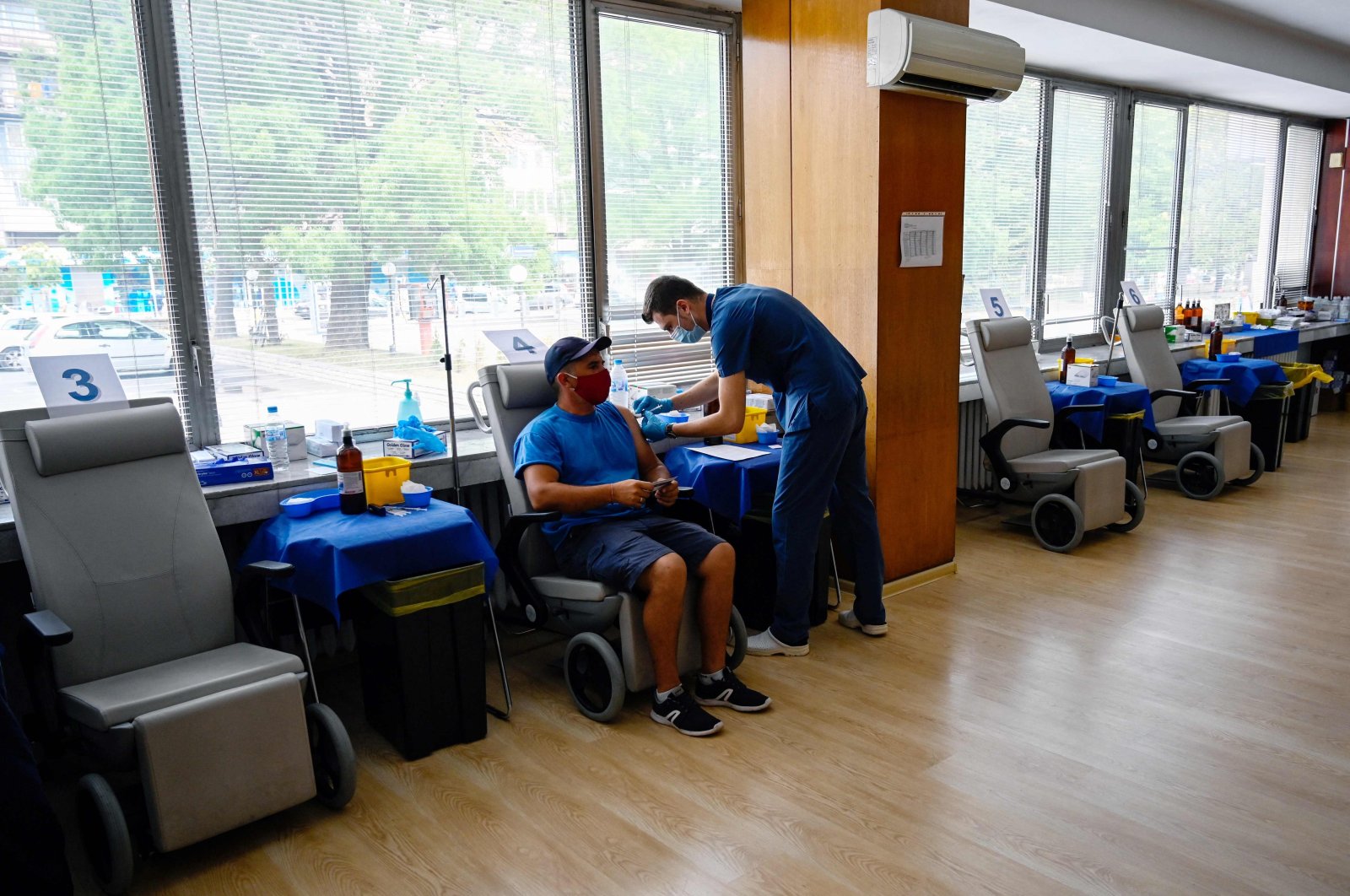 This photograph taken on August 6, 2021, shows a healthcare worker vaccinating a patient at a COVID-19 vaccination centre at The Military Medical Academy in Sofia, where a variety of vaccines are available: AstraZeneca, Pfizer Biotech, Moderns and Jansen. (AFP Photo)
by French Press Agency - AFP Aug 12, 2021 3:16 pm
RECOMMENDED

Bulgaria, a country with one of the highest coronavirus mortality rates in Europe, is struggling to curb the COVID-19 pandemic as its immunization efforts are hamstrung by fake news and widespread mistrust.

As a fourth coronavirus wave looms, official data shows that only 15% of the population of 6.9 million people has been fully vaccinated, far below the EU average of 53.3%.

"Ever since the start of vaccinations we have been lagging last," Health Minister Stoycho Katsarov said in a recent interview.

On the streets of Sofia, it's easy to spot the attitudes that have led to the low uptake.

"Absolutely not!" replies 45-year-old construction worker Georgy Dragoev, when asked by Agence France-Presse (AFP) if he would get vaccinated.

"I think that they're just spreading panic," he says, while taking his lunch break on a bench outside the vaccination center.

"If this coronavirus exists and I catch it, I will somehow manage to beat it," he adds.

'Not an easy decision'

A recent Gallup poll showed that a total of 41.8% of Bulgarians said they didn't plan to get jabbed.

Even some of those who came to get vaccinated have had their reservations.

Accountant Katerina Nikolova, 39, told AFP that it "was not an easy decision" for her, saying the expedited clinical trial procedure for the COVID-19 vaccines worried her.

Outright fake news about the virus has also played a role.

Since mid-March, AFP has been running a fact-checking service in Bulgarian, and in that period, half the articles published have been related to coronavirus disinformation.

The theories range from the claim that the vaccine leaves magnetic chips implanted in people's arms – shared thousands of times on Facebook – to pictures of French football fans' victory celebrations after the 2018 World Cup being falsely presented as being from protests against France's "health pass."

Health Minister Katsarov has partly blamed Bulgarians' "susceptibility to conspiracy theories" for the low vaccine uptake but Nikolova said she was also confused by the conflicting views of experts invited on TV.

Such guests are often asked to comment on areas outside their expertise or are allowed to present scientifically dubious opinions.

One of the voices invited to contribute to television debates, Atanas Mangarov, is an infectious disease associate professor and the head of the COVID-19 care unit at a Sofia hospital but has spread discredited theories on the virus, insisting mask-wearing and vaccines aren't necessary and promoting herbal teas as a treatment.

Media expert Nelly Ognyanova says that the media have contributed to the poor standard of information.

"The media, the social networks, the public appearances of experts and other sources carry shared responsibility for anti-vaxxer sentiment and for mistrust about the role and safety of vaccines," she said.

"It is not a secret that this is also part of a hybrid war led by the Kremlin," she added, referring to the role of Russian troll factories in spreading disinformation – in a country which has long enjoyed close cultural links to Russia.

According to Parvan Simeonov from Gallup International, the skepticism towards vaccines also reflects Bulgarians' "resentment towards elites" and broader mistrust of authorities and official information.

According to official data, Bulgaria has registered just under 430,000 cases of coronavirus infection but experts and health authorities agree that this is definitely an undercount as access to free tests is limited and many sick people simply did not pay to get a test.

Simeonov says vaccine uptake has further been slowed by the sheer number of people who have already been infected – or believe they have – and who have therefore delayed their jabs in accordance with medical advice.

However, as the fourth wave of infections looms, Simeonov said "the fear factor" could bring a change in attitudes in the months ahead, driving vaccinations.

If the population remains hesitant, experts are worried it could lead to Bulgaria's coronavirus mortality rate – already one of the highest in the EU at 263 per 100,000 inhabitants – spiking yet further.