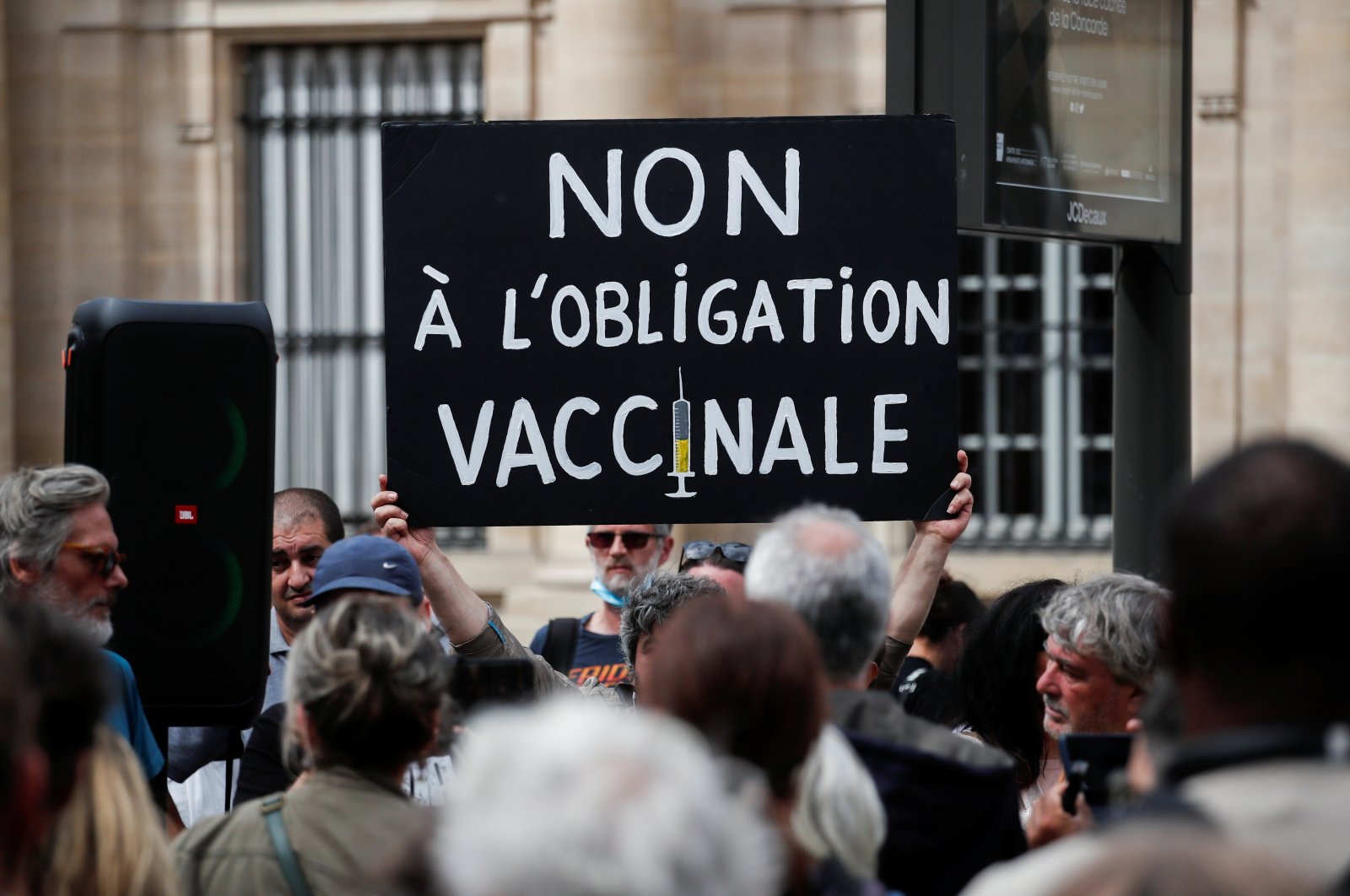 A protester holds a placard during a demonstration called by the "yellow vests" (gilets jaunes) movement against France's restrictions, including a compulsory health pass, to fight the coronavirus outbreak in Paris, France, Aug. 5, 2021. (Reuters)
by DAILY SABAH WITH AA
Aug 06, 2021 9:11 am

The highest constitutional authority in France ruled in favor of controversial measures for a COVID-19 "health pass" Thursday, along with compulsory vaccination for health care workers.

With the decision by the Constitutional Council, the precautions drawn out in a recently passed health crisis bill will go into effect on Monday, requiring proof of vaccination or a negative coronavirus test to sit on the outdoor terrace of a cafe or eat at a restaurant. Those who lack both will be barred entry.

Shortly after the decision, a large crowd of protestors wearing yellow jackets gathered outside the council's building in Paris chanting: "We don’t want the pass." Police blocked the demonstrators from entering the building.

President Emmanuel Macron took to Instagram to defend the health pass, saying: "No freedom is absolute." He compared the restrictions on unvaccinated people to drunk driving laws meant to prevent people from endangering others' lives.

"It is responsible freedom, the freedom of a citizen," he said. Opposition leaders, however, slammed the council's decision.

Marine Le Pen of the far-right party National Rally, called it "total hypocrisy," while Jean Luc Melenchon of the socialist France Insoumise said the disappointing decision did not protect freedom.

Julien Bailly, 37, who wore a “Health dictatorship: Stop” sticker on his shirt said he was fully vaccinated, but “everyone should be able to make that choice freely, not because oppressive laws force them to. Soon we’ll need QR codes for everything in life," he added. "This is a slippery slope and an unprecedented attack on our freedoms,” he said according to France 24 news channel.

The health pass will serve this function in both digital form and on paper, providing proof of vaccination or the latest negative result of a PCR/antigen test for entry in public and social places with more than 50 people.

The Constitutional Council was approached by the government led by Macron and more than 60 senators to deliver its verdict on certain contested provisions of the health bill deemed to be infringing on the freedoms of movement and assembly.

The council said in its decision that the contested provisions struck a "balanced reconciliation" between the constitutional personal freedoms and public health concerns. It also validated measures that made vaccination compulsory for health workers. It struck down other measures, like compulsory isolation of 10 days of COVID-19 positive patients and termination of temporary contract workers for noncompliance with health pass provisions.

It also ruled that while employers can remove medical and front-line workers who refuse to be vaccinated against COVID-19 or show negative test results, they cannot fire those working on short-term contracts.

To mitigate the risk posed by the more transmissible delta variant of the coronavirus, Macron announced the measures in July concerning the health pass and compulsory vaccination, following which the health bill was tabled in the two houses of the parliament for approval of lawmakers.

These two measures in particular have divided French people, with thousands descending to the streets to oppose their implementation over the past three weekends, and more protests are expected this week.

Macron said he would not obey the demands of anti-vaccine and anti-health protesters who have protested across France over the past three weekends.

"A few tens of thousands of people have lost their minds to such an extent that they say we live in a dictatorship," Macron told Paris Match in an interview published Wednesday.

Despite this, the government has said it intends to begin enforcement of the health crisis bill immediately from Aug. 9, following the council's decision, until at least Nov. 15.

Meanwhile, Macron announced Thursday via Instagram the government's intention to roll out a third booster shot vaccine for the elderly and vulnerable from September.

The World Health Organization (WHO) has appealed to developed countries to put off booster shots in favor of vaccination among poor and developing countries.