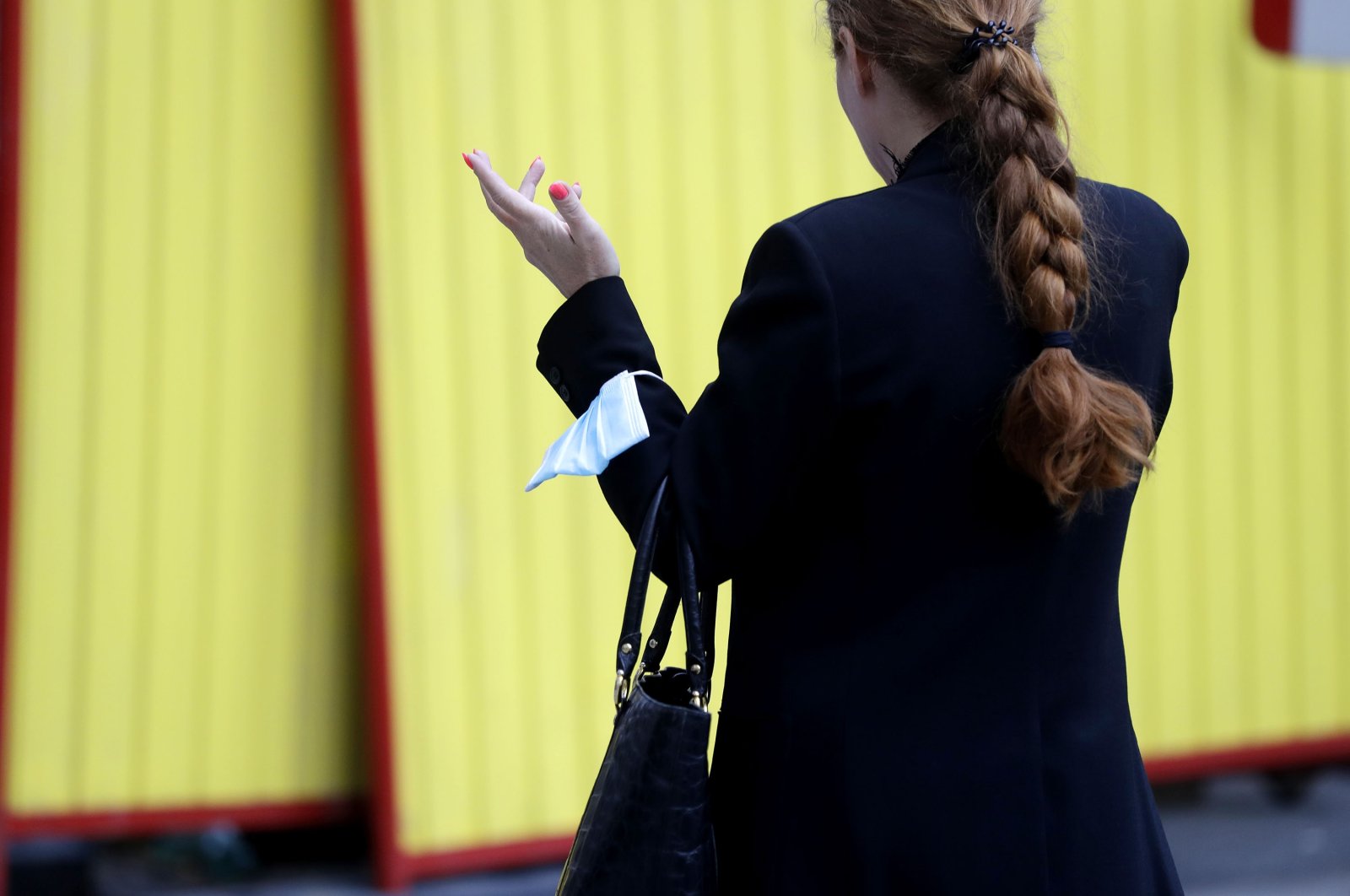 This weekend, I'm having quarantinis with my quaranteam. It will be nice to be together in person, since we all have Zoom fatigue. We'll meet outdoors, so no need for PPE, but we'll still social distance. After all, we aren't covidiots, and we sure don't want a second wave. If we have to lock down to flatten the curve again, it would be a coronapocalypse.

A year ago, that paragraph would have been unintelligible. Now, it's as clear as a plexiglass shield.

The eight-month-old pandemic has had such a huge impact on the English language that editors of the venerable Oxford English Dictionary have so far issued two special updates to document it. The Canadian government has compiled a pandemic glossary, from antigen to zoonosis. And King's College London slang specialist Tony Thorne has a Lockdown Lexicon.

Because of a microscopic new germ, our daily speech is now full of medical and epidemiological jargon such as "viral load" and "contact tracing." "No mask, no entry" warnings are as ubiquitous as "No turn on red" signs.

We are also using language to relieve the awfulness of pandemic life, embracing slang, puns, catchphrases, acronyms, memes and goofy new words that blend the sounds and meanings of existing words.

"This process isn't new. What is different is the scale of it," said Andrea Beltrama, a sociolinguist at the University of Pennsylvania.

"This is a social, medical, psychological, political and economic situation that affects us around the globe. It affects fun, work, relationships. We have a clear snapshot of how language is shaped," she said.

Will the vernacular of the pandemic disappear when normalcy (hopefully) returns?

"It will be interesting to look back in 20 years to see what stuck and what didn't," Beltrama said. "Making a word part of the lexicon is a big step toward normalizing a completely abnormal situation."

In February, U.S. Surgeon General Jerome Adams tweeted: "Seriously people – STOP BUYING MASKS! They are NOT effective in preventing general public from catching coronavirus, but if healthcare providers can't get them to care for sick patients, it puts them and our communities at risk!"

By Memorial Day, he and other top public health officials were tweeting a very different, but still muddled, message: A mask won't protect you from inhaling the virus, but wear one anyway to protect other people from you in case you're infected but don't know it.

Studies since then have shown that masks, even cloth ones, do indeed help protect wearers from catching, as well as spreading, the virus.

The U.S. is hardly alone in making a mess of messaging. British linguist Rodney Jones has parsed the evolution of slogans that were part of daily coronavirus briefings by two officials of the British National Health System (NHS) and Prime Minister Boris Johnson, himself a survivor of severe COVID-19.

At first, one part of the slogan "Stay Home, Protect the NHS, Save Lives" appeared on each of three podiums during the briefings. But that, Jones speculated in his online article, likely led to some infighting: "Do I have to be 'stay home' again? Why can't I be 'save lives' this time?"

That problem was solved by giving each podium a poster with all three phrases shrunken and stacked vertically – making the slogan practically unreadable from a few feet away.

In May, a completely new slogan – "Stay Alert. Control the Virus. Save Lives" – was introduced, and immediately mocked. Harry Potter author JK Rowling asked on Twitter, "Is the coronavirus sneaking around in a fake mustache and glasses? What the hell is 'stay alert' supposed to mean?"

Oxford University linguist Deborah Cameron tweeted: "It's a virus, not an internet scam or a terrorist plot. WTF does 'stay alert' even mean."

Within hours, social media was awash with parodies: "Meaningless slogan. Three-word platitude. Invoke heroism." "Sneak up. Shout at the virus. Then run." "Do as you please. We're not fussed. If some of you die." "Have affair. Don't inject bleach. OK just a little."

But it was Johnson's mixed messages about working from home unless you can't because you have a blue-collar job in, say, manufacturing or construction, that inspired this zinger: "Back to work. Catch the virus. Save the billionaires."

In March, U.S. President Donald Trump was criticized for calling the coronavirus the "China virus," even as reports of bigotry against Asian Americans mounted.

"It's not racist at all, no, not at all. It comes from China, that's why. I want to be accurate," Trump said.

A few weeks later, he agreed to stop using the offensive label, tweeting that the spreading of the virus was not the fault of Asian Americans "in any way, shape, or form."

But Sean Hannity, Rush Limbaugh and other right-wing commentators continued to cast the pandemic as the U.S. versus China, with Republican Senator Tom Cotton of Arkansas even suggesting to Fox News that the virus had been created in a Chinese government laboratory near Wuhan, where the outbreak began.

The 1918 flu pandemic that killed 20 million people globally was dubbed "the Spanish flu" – not because anyone knew where it originated, but because the Spanish government was honest about Spain's outbreak, while other countries were downplaying or denying what was happening within their borders, as USA Today explained.

"Language reflects and reinforces biases," said Beltrama at Penn. Did you know that quarantine comes from the Italian "quaranta giorni?" It means 40 days, which is how long Venice made people stay on ships in the harbor to curb epidemics in the 14th century. Virus, from the Latin for poison or foul juice, was also coined in the 14th century, long before anyone understood the causes of infection.

Other pandemic terms are old but repurposed, prompting lexicographers to add updated meanings. Shelter in place, for example, means take cover from a tornado or an active shooter, but now it's also a stay-at-home order. Limiting face-to-face contact to avoid catching a disease – social distancing goes back to the Middle Ages, but now that it's synonymous with staying 6 feet (1.8 meters) apart, it also means physical distancing.

Essential workers, meanwhile, has become a fraught label. There is no standard definition, and calling them "heroes" doesn't erase inequities. Minimum-wage earners like grocery cashiers and warehouse stockers are expected to risk COVID-19, no less than well-paid medical professionals.

Some technical terms have morphed into symbols. "Flatten the curve" is an epidemiological concept, complete with a now-familiar graphic, meaning curbing the spread of disease to avoid overloading hospitals.

But in the spring, the phrase became a rallying cry – and a rebuke to people who rejected precautions.

"In no time, I noticed bars and cafes having signs that said, 'Help us flatten the curve,'" Beltrama recalled.

Perhaps the most egalitarian feature of coronargot ("corona" plus "argot") is that anyone can blend or combine existing words to invent a new one (like coronargot). However, many of these aren't very funny or useful (like coronargot). The Economist offered some rules for successful coinages in its weekly column on language:

"The words that went into the new word should be obvious. Few English words end in 'tini,' so if someone invites you for a quarantini, you know what to expect. By contrast, loxit, the much hoped-for exit from lockdown, is a dud. ... It sounds as though it has to do with brined salmon."

"If you want your contribution to coronaspeak to take off," the column concluded, "you need to lobby not the dictionary-writers, but your friends and colleagues, and get them to use and publicize it."