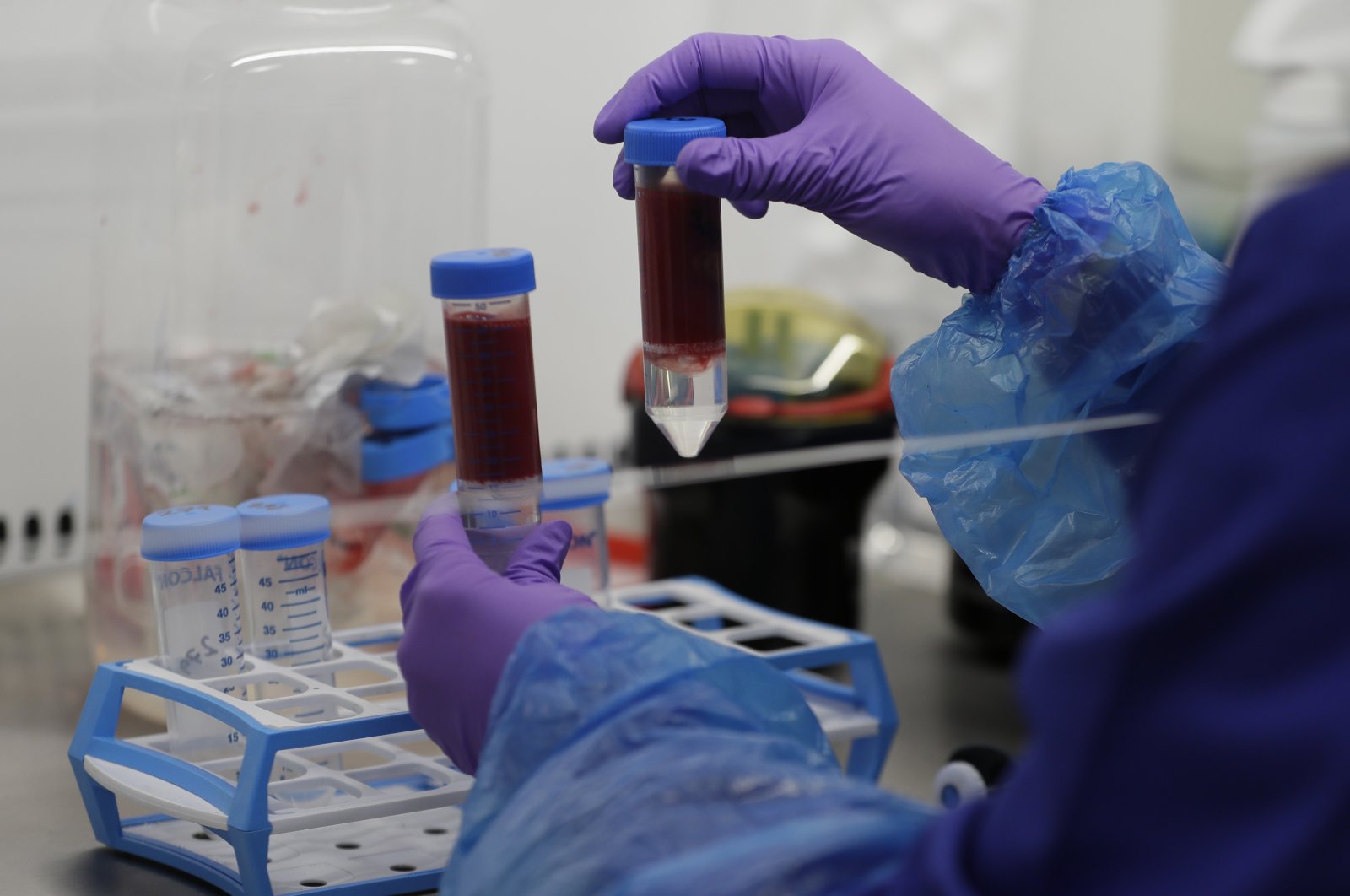 Blood samples from coronavirus patients are prepared for analysis as part of the TACTIC-R trial in the Blood Processing Lab in the Cambridge Institute of Therapeutic Immunology and Infectious Disease, in Cambridge, England, May 21, 2020. (AP Photo)
by ASSOCIATED PRESS
Oct 20, 2020 5:09 pm

U.K. researchers are preparing to infect healthy young volunteers with the virus that causes COVID-19, becoming the first scientists to use the controversial technique to study the disease and potentially speed up development of a vaccine that could help end the pandemic.

This type of research, known as a human challenge study, is used infrequently because some consider the risk involved in infecting otherwise healthy individuals to be unethical. But researchers racing to combat COVID-19 say that risk is warranted because such studies have the potential to quickly identify the most effective vaccines and help control a disease that has killed more than 1.1 million people worldwide.

"Deliberately infecting volunteers with a known human pathogen is never undertaken lightly,″ said professor Peter Openshaw, co-investigator on the study. "However, such studies are enormously informative about a disease, even one so well studied as COVID-19."

Human challenge studies have been previously used to develop vaccines for diseases including typhoid, cholera and malaria.

Imperial College London said Tuesday that the study, involving volunteers ages 18 to 30, would be conducted in partnership with the government's Department for Business, Energy and Industrial Strategy, the Royal Free London NHS Foundation Trust and hVIVO, a company that has experience conducting challenge studies. The government plans to invest 33.6 million pounds ($43.4 million) in the research.

Before any research begins, the study will be considered by regulators and the NHS Health Research Authority.

Governments around the world are funding efforts to develop a vaccine in hopes of ending the pandemic that has pummeled the international economy, shutting businesses and putting millions of people out of work. Forty-six potential vaccines are already in human testing, with 11 of them in late-stage trials – several expected to report results later this year or in early 2021.

"I don’t think many people think that what we’re doing as scientists is searching for a silver bullet,'' said Michael Jacobs, a consultant in infectious diseases at the Royal Free London NHS Foundation Trust who will take part in the research. "We’re going to need a whole raft of interventions in order to control this pandemic.”

Tens of thousands of volunteers around the world have already signed up to participate in more traditional trials of COVID-19 vaccines. Critics of challenge studies question the need to expose healthy people to the virus when the disease remains widespread and vaccine development is moving quickly.

In the first phase of the U.K. challenge study, researchers will expose 90 paid volunteers to the virus using nasal drops in an effort to determine the smallest level of exposure needed to cause COVID-19. Ultimately, the same model will be used to test the effectiveness of potential vaccines by exposing volunteers to the virus after they've received one of the candidate vaccines.

The research will be conducted at the Royal Free Hospital in London, which has a specially designed area to contain the disease. Volunteers will be monitored for at least a year to ensure they don't suffer any long-term effects.

Kate Bingham, chair of the UK Vaccine Taskforce, which is tasked with promoting development of a vaccine for COVID-19, said the project will improve understanding of the virus and help scientists make decisions about research.

"There is much we can learn in terms of immunity, the length of vaccine protection and reinfection,'' she said in a statement.

Challenge studies are typically used to test vaccines against mild infections to avoid exposing volunteers to a serious illness if the vaccine doesn’t work. While the coronavirus causes only mild or moderate symptoms in most people and seems to be especially mild in young, healthy individuals, the long-term effects of the disease aren’t well understood, and there have been reports of lingering problems in the heart and other organs even in those who don’t ever feel sick.

In the United States, the National Institutes of Health (NIH) has downplayed the need for challenge studies given the speed with which vaccines are being developed, but it has taken preliminary steps to prepare for such research in case the approach eventually is required. Those steps include examining the ethics of a challenge study and funding research to create lab-grown virus strains that potentially could be used.

But even if they are needed, "human challenge trials would not replace Phase 3 trials” of COVID-19 vaccines, according to a September statement from NIH that called the standard, rigorous studies its priority.

In July, the NIH’s vaccine working group published a paper in The New England Journal of Medicine pointing out the risks of doing a challenge study with a virus that so far has no good treatment and is wildly unpredictable, occasionally killing even some young, otherwise healthy people.

But 1Day Sooner, which advocates for COVID-19 challenge trial volunteers, praised the decision and called on the government to build a testing center.

"We are glad the U.K. government is embracing the altruism of the thousands of our British volunteers who want these studies,'' the group said in a statement. "Challenge trials will be key to making multiple safe and effective COVID-19 vaccines available for the whole world, including those in low-income countries bearing the brunt of this pandemic.''

"So many people (are) struggling right now, and I want this pandemic to be over," she told The Associated Press. "Every day that goes on, more cases are going on, more people are dying. And if this vaccine trial could mean that this period of trauma for the whole world will be over sooner, I want to help. I want to be a part of that.”