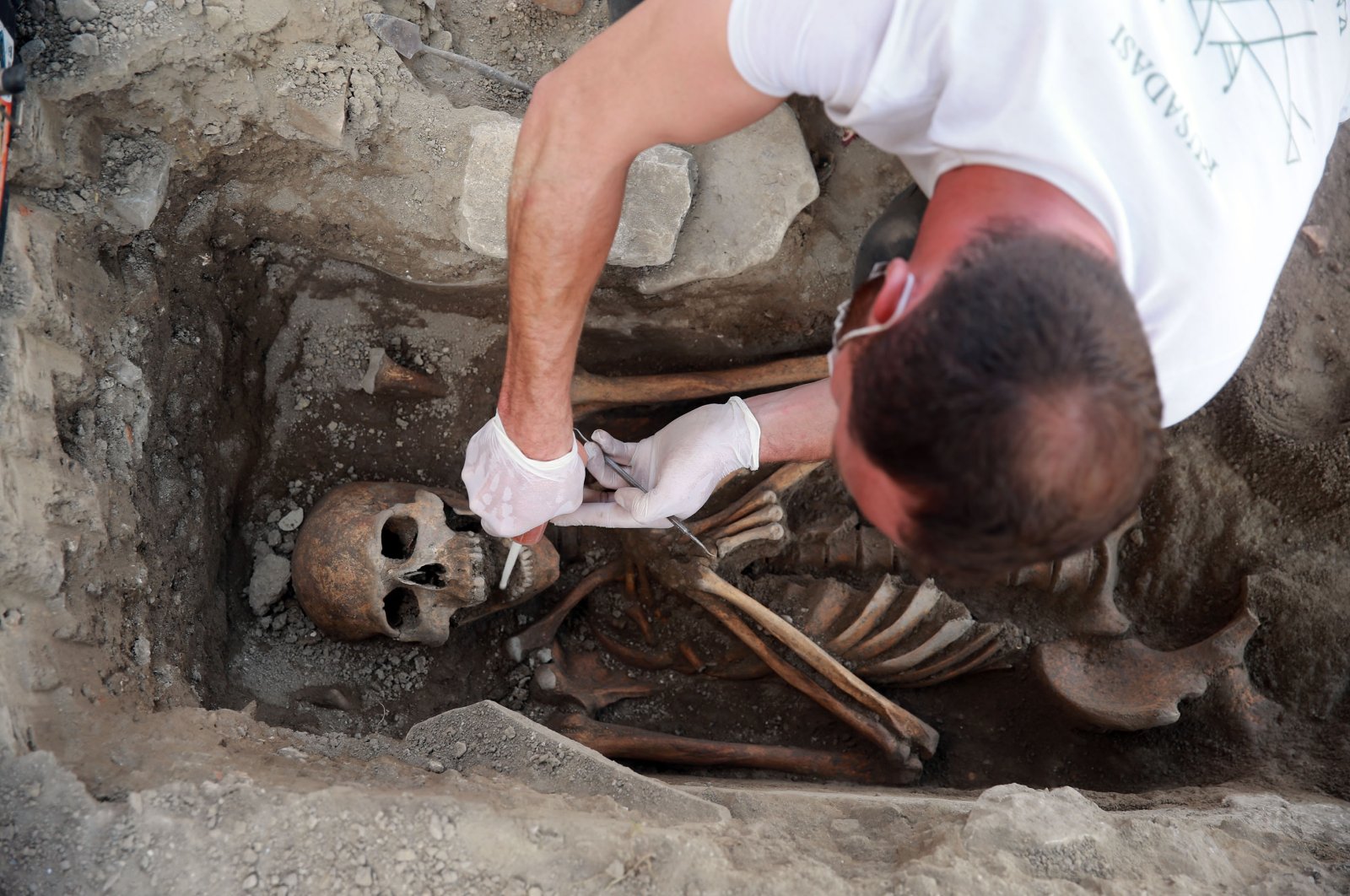 An archeologist works on a skeleton found at the Kadıkalesi archaeological site, Aydın, western Turkey, May 6, 2021. (AA Photo)
by Anadolu Agency May 07, 2021 2:37 pm
RECOMMENDED

So far this year a total of five skeletons thought to date back to the 13th century have been excavated at the historical Kadıkalesi archaeological site in Turkey's western Aydın province’s Kuşadası district.

The excavations at Kadıkalesi, which was known as Annaea in the ancient era and dates back more than 5,000 years, have been sustained studiously. A total of five human skeletons, two of which belong to children, are among the most significant findings of the latest work on the site. Archeologists had previously discovered cat and dog paw prints on brick and roof tiles that are nearly eight centuries old in Kadıkalesi.

The director of Aydın Archeology Museum, Abdulbari Yıldız told Anadolu Agency (AA) that Kadıkalesi, which was built on a mound, uninterruptedly hosted settlements until the 14th century. Yıldız added that the castle on the site was also used for military purposes during the republic period. Noting that they found five graves in the ongoing excavations around the church on the site, the director continued: “We have determined that the skeletons in these five graves belonged to people of the Christian religion based on the posture of their skeletons and the style of their burial. Anthropological work on the graves still continues. Since there was no settlement here from the 14th to the 20th century, we can see the graves intact. All of the skeletons we found this year were undamaged."

Yıldız said that the team did not see any signs of trauma on the skeletons that can be linked to their deaths. "There is only a fracture in the skull of a child," he said. "I think it is a fracture from a fall. We found these graves near the church of the site. Since the church is a sacred place, people wanted to place their graves close to it even if this place is not a cemetery.” He added that necklaces and bracelets with cross motifs were also found in the graves.

The excavations were launched in Kadıkalesi in 2001 under the supervision of professor Zeynep Mercangöz, head of the art history department at Ege University. Archeologists have discovered numerous artifacts that shed light on the region's ancient social and commercial life during these excavations. They have found collections of ceramics, pottery and utensils at the site. By looking at the various forms, colors and rich motifs on the ceramics, it can be said that Kadıkalesi was an able, rich center of production. The findings of the experts’ work are displayed at the Aydın Archaeological Museum.