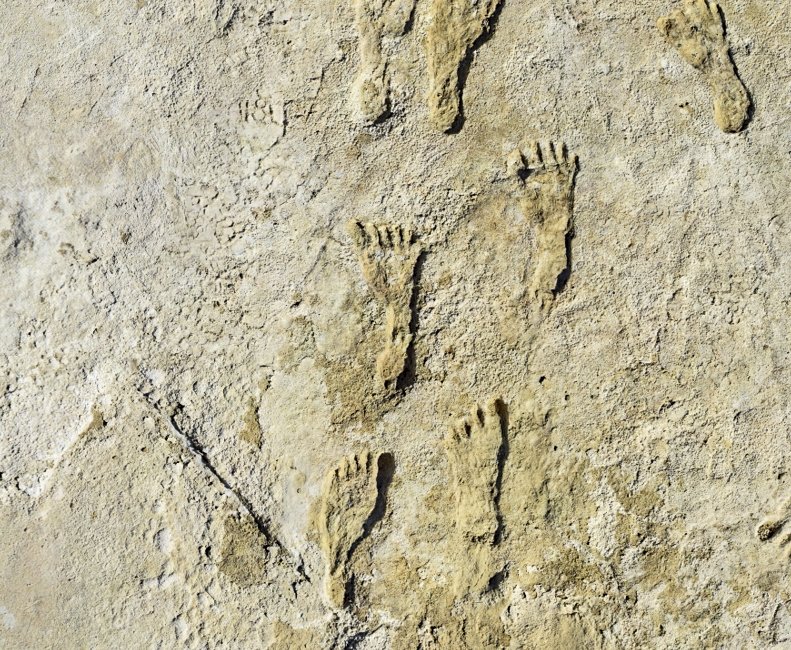 Fossilized human footprints can be seen at the White Sands National Park in New Mexico, U.S., in this undated photo made available in September 2021. (Nation Park Service via AP)
by ASSOCIATED PRESS Sep 24, 2021 12:16 pm
RECOMMENDED

The first footprints were found in a dry lake bed in White Sands National Park in 2009. Scientists at the U.S. Geological Survey recently analyzed seeds stuck in the footprints to determine their approximate age, ranging from around 22,800 and 21,130 years ago, researchers reported Thursday.

The findings may shed light on a mystery that has long intrigued scientists: When did people first arrive in the Americas, after dispersing from Africa and Asia? Most scientists believe ancient migration came by way of a now-submerged land bridge that connected Asia to Alaska.

Based on various evidence – including stone tools, fossil bones and genetic analysis – other researchers have offered a range of possible dates for human arrival in the Americas, from 13,000 to 26,000 years ago or more. The current study provides a more solid baseline for when humans definitely were in North America, although they could have arrived even earlier, the authors say. Fossil footprints are more indisputable and direct evidence than "cultural artifacts, modified bones, or other more conventional fossils,” they wrote in the journal Science, which published the study Thursday. "What we present here is evidence of a firm time and location,” they said.

Based on the size of the footprints, researchers believe that at least some were made by children and teenagers who lived during the last ice age. David Bustos, the park's resource program manager, spotted the first footprints in ancient wetlands in 2009. He and others found more in the park over the years.

"We knew they were old, but we had no way to date the prints before we discovered some with (seeds) on top,” he said Thursday. Made of fine silt and clay, the footprints are fragile, so the researchers had to work quickly to gather samples, Bustos said. "The only way we can save them is to record them – to take a lot of photos and make 3D models,” he said. Earlier excavations in White Sands National Park have uncovered fossilized tracks left by a saber-toothed cat, dire wolf, Columbian mammoth and other ice age animals.