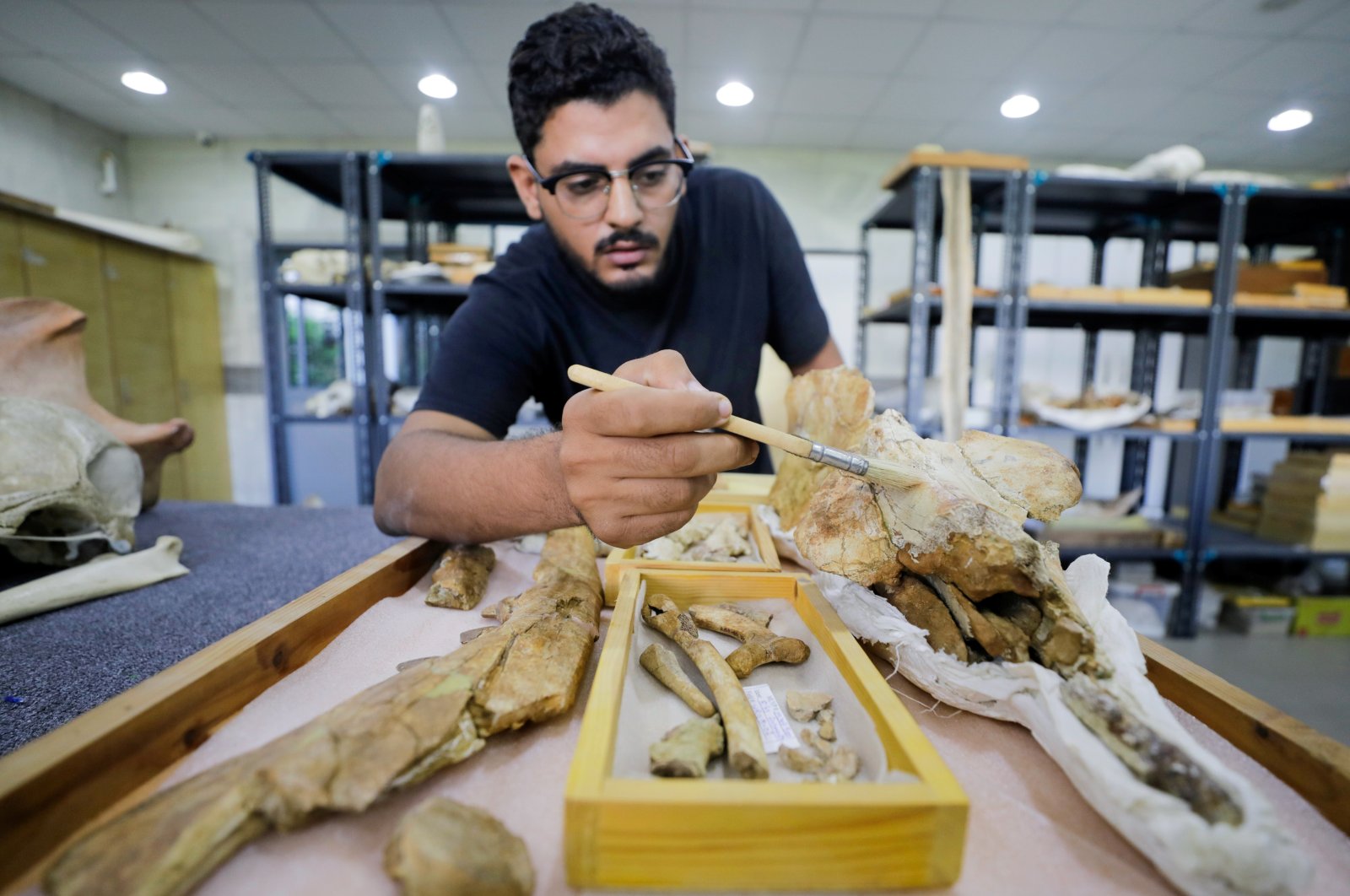 Abdullah Gohar, a researcher at El Mansoura, university works on renovating the 43 million-year-old fossil of a previously unknown four-legged amphibious whale called "Phiomicetus Anubis", that helps trace the transition of whales from land to sea, which were discovered in the Fayum Depression in the Western Desert of Egypt, near the town of El Mansoura, north of Cairo, Egypt August 26, 2021. (Reuters Photo)
by REUTERS
Aug 26, 2021 2:55 pm

The discovery will help to trace the transition of whales from land to sea.

The newly discovered whale belongs to the Protocetidae, a group of extinct whales that falls in the middle of that transition, the Egyptian-led team of researchers said in a statement.

Its fossil was unearthed from middle Eocene rocks in the Fayum Depression in Egypt's Western Desert – an area once covered by sea that has provided a rich seam of discoveries showing the evolution of whales – before being studied at Mansoura University Vertebrate Palaeontology Centre (MUVP).

The new whale, named Phiomicetus anubis, had an estimated body length of some three meters (10 feet) and a body mass of about 600 kg (1,300 lb), and was likely a top predator, the researchers said. Its partial skeleton revealed it as the most primitive protocetid whale known from Africa.

"Phiomicetus anubis is a key new whale species, and a critical discovery for Egyptian and African paleontology," said Abdullah Gohar of MUVP, lead author of a paper on the discovery published in the journal Proceedings of the Royal Society B.

The whale's genus name honors the Fayum Depression and species name refers to Anubis, the ancient canine-headed Egyptian god associated with mummification and the afterlife.

Despite recent fossil discoveries, the big picture of early whale evolution in Africa has largely remained a mystery, the researchers said. Work in the region had the potential to reveal new details about the evolutionary transition from amphibious to fully aquatic whales.

The new whale has raised questions about ancient ecosystems and pointed research towards questions such as the origin and coexistence of ancient whales in Egypt, said Hesham Sellam, founder of the MUVP and another co-author.