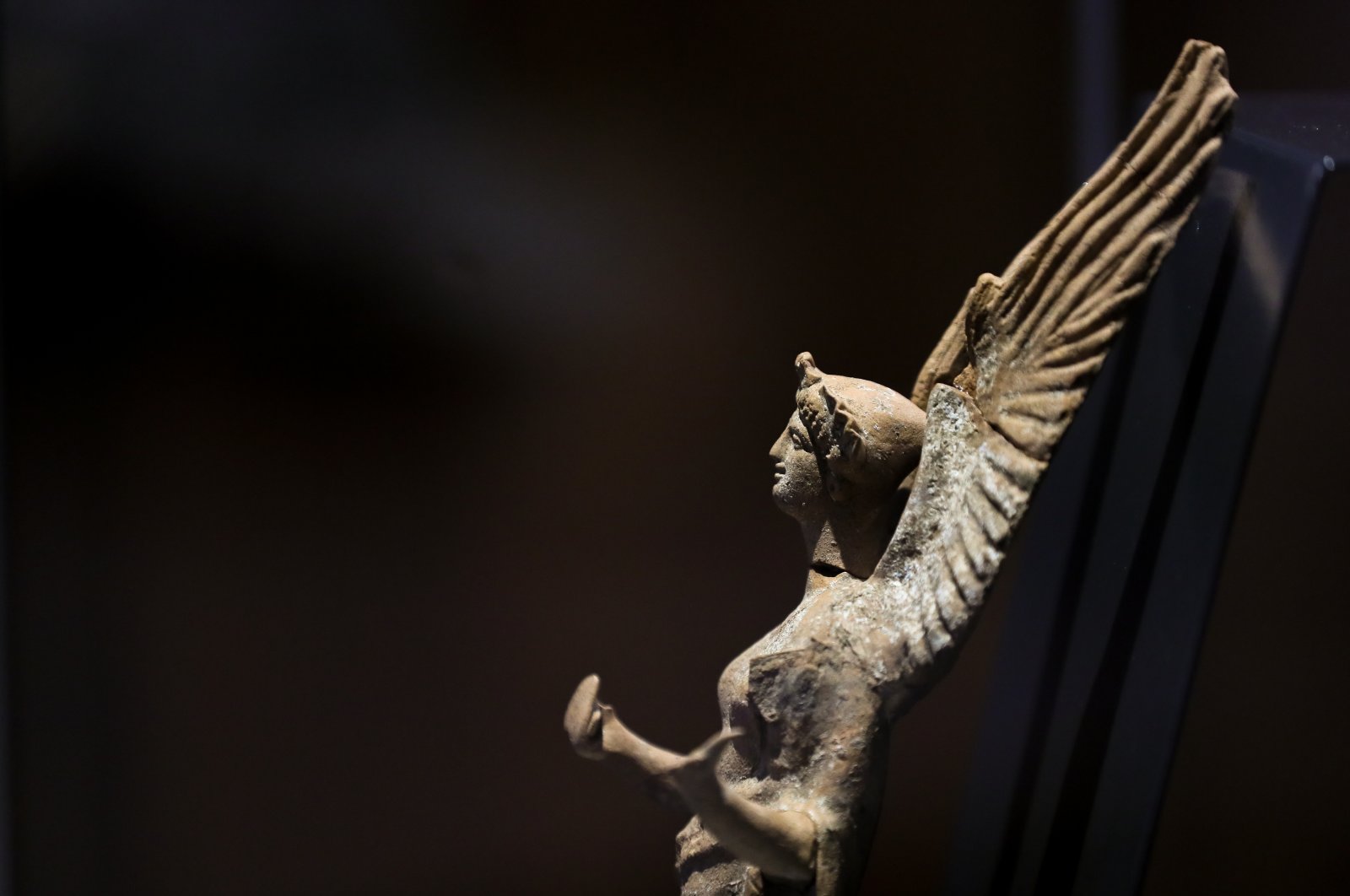 Artifacts dedicated to the cult of Nike, the goddess of victory in mythology, are waiting for their visitors at the Izmir Archeology Museum

The Izmir Archaeology Museum is bringing out artifacts dedicated to the ancient Greek goddess Nike for a special exhibition series.

Special artifacts related to the goddess of victory will be displayed for the first time by the Izmir Archaeology Museum in August as part of its project "You Will See What You Can't See," in which every month the museum exhibits unique artifacts that are usually kept in storage and rarely seen by the public.

Nike was the daughter of the giant Pallas and of the infernal River Styx in Greek mythology. Thus, she was a sibling of Zelos, Bia and Cratus.

​As the Greek goddess of victory, Nike was closely associated with athletics and other contests, as well as warfare. She was normally depicted as a beautiful woman, with a lyre in hand, to celebrate victory, a wreath, to crown a victor, and a bowl and cup for libations to honor the gods. In ancient Rome, where Nike was called Victoria, she was widely worshipped.

Nike lived on Mount Olympus and became the divine charioteer of Zeus. She served as his charioteer in the War of Titans and the war against the monster Typhon. When Typhon had made most of the gods flee, Nike was the only one to stay with Zeus. In some myths, Nike gives Zeus a speech to help him stand up and keep fighting for victory. Some depictions of the winged goddess show her next to the throne of Zeus on Mount Olympus.

Besides her role with Zeus, Nike plays a central role in Greek mythology as the goddess of victory in wars and contests. Several authors wrote about her influence in blessing the victors with her favor. She’s also referred to as the goddess of speed and the herald who announced victories.

In some myths, she is the deity who guides the horses of the heroes in their battles and feats. It is common for her to appear as the companion of Zeus and Athena.

Three works depicting Nike are now on show for visitors to see in the treasury room of the museum.

A 49-centimeter (19-inch) marble column dating back to the Hellenistic era is the centerpiece of the exhibit. The column was unearthed in 1925 from the ancient city of Pergamon in Izmir's Bergama district. The piece features a winged figure of Nike holding the sides of her dress and laurel leaf motifs.

The marble column, believed to be about 2,000 years old, is among the first artifacts brought to the Izmir Archeology Museum and is now being shown to the public for the first time in nearly a century.

The second piece in the exhibit, a burned clay oil lamp unearthed from the ancient city of Iasos in Milas in the western Muğla province, has a figure of Nike on its concave surface.

The nearly 2,500-year-old Nike figure was unearthed from the ancient city of Neonteikhos in Menemen, Izmir and is believed to have been a burial gift.

Speaking to Anadolu Agency (AA), Cengiz Topal, director of the Izmir Archeology Museum, said: "Nike is seen as a personalized form of victory in Greek mythology who can run and fly, and in the Roman era she was known as Victoria."

Topal said Nike could be found both in the public arena and in temples of other mythological gods, such as Athena, the goddess of wisdom, and Zeus, the king of the gods.

The goddess of victory was often used to commemorate and bless victories in wars and competitions, Topal added.

Within the scope of the project, artifacts from the Bronze Age, Cybele figures, Apollon and Athena sculptures exhibited since the beginning of 2022 have also attracted attention.