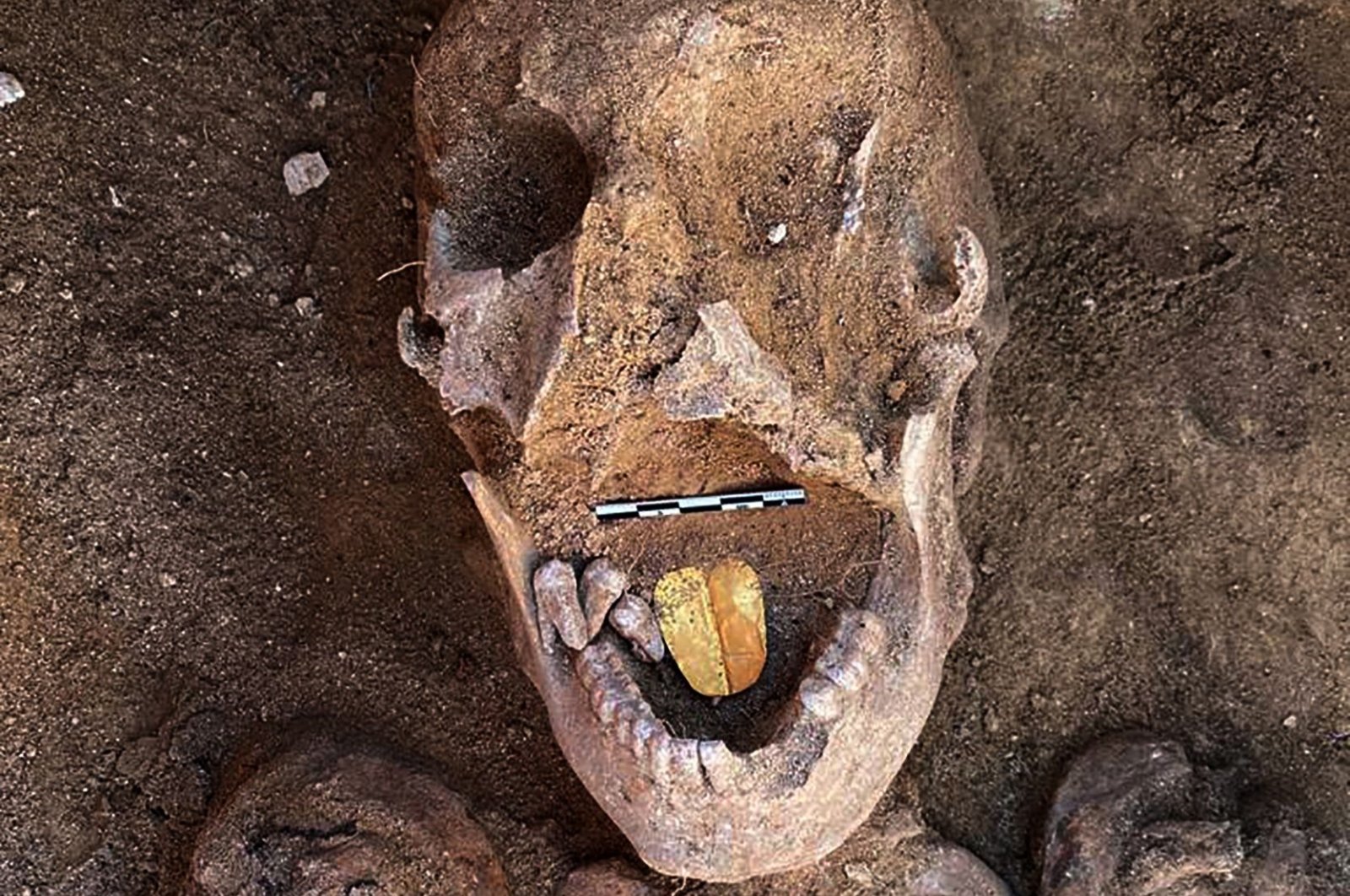 A 2,000-year-old mummy with a gold foil amulet inside his mouth is seen at the Taposiris Magna Temple in western Alexandria, Egypt, Jan. 29, 2021. (Egyptian Ministry of Antiquities via AFP)
by French Press Agency - AFP Feb 04, 2021 5:02 pm
RECOMMENDED

An Egyptian-Dominican archaeological team, working near Alexandria, has discovered 2,000-year-old mummies, some of them bearing golden-tongued amulets, the Egyptian authorities stated.

"The mission discovered 16 tombs cut into the rock ... in the temple of Taposiris Magna, west of Alexandria" in northern Egypt, the Antiquities Ministry said in a statement, adding that the burial technique was widespread in the Greek and Roman periods.

The tombs contained several mummies that were "poorly preserved" but bore "gold-leafed amulets in the shape of a tongue." The amulets were placed in the mouths of the dead "to ensure they could speak in the afterlife," according to the ministry.

Two of the mummies were of particular interest to the researchers, mission chief Kathleen Martinez was quoted as saying in the statement. One had "bandages and parts of cardboard – layers of glued, stuccoed and painted linen fabric that enveloped the mummy, decorated with gilding with the effigy of Osiris," the Egyptian god of death and the underworld.

The second bore a "crown decorated with horns and a cobra ... as well as a necklace with a pendant in the form of a falcon's head," representing the god Horus, the son of Isis and Osiris, according to the statement.

The archaeological team has been working to the west of Alexandria for several years, in a mission to search for the tomb of the legendary Ptolemaic Queen Cleopatra, though doubts remain among archaeological circles about the likelihood of finding it in the area.

The Ptolemaic dynasty was of Greek origin and ruled Egypt between 323 and 30 B.C. It was the last pharaonic dynasty before Egypt came under Roman rule, and Cleopatra was its last sovereign.

Several other ancient discoveries have been made in Egypt in recent times, particularly at the UNESCO World Heritage site of Saqqara with nearly a hundred sarcophagi and statues discovered in mid-November, some of them thought to rewrite the ancient history of the site.