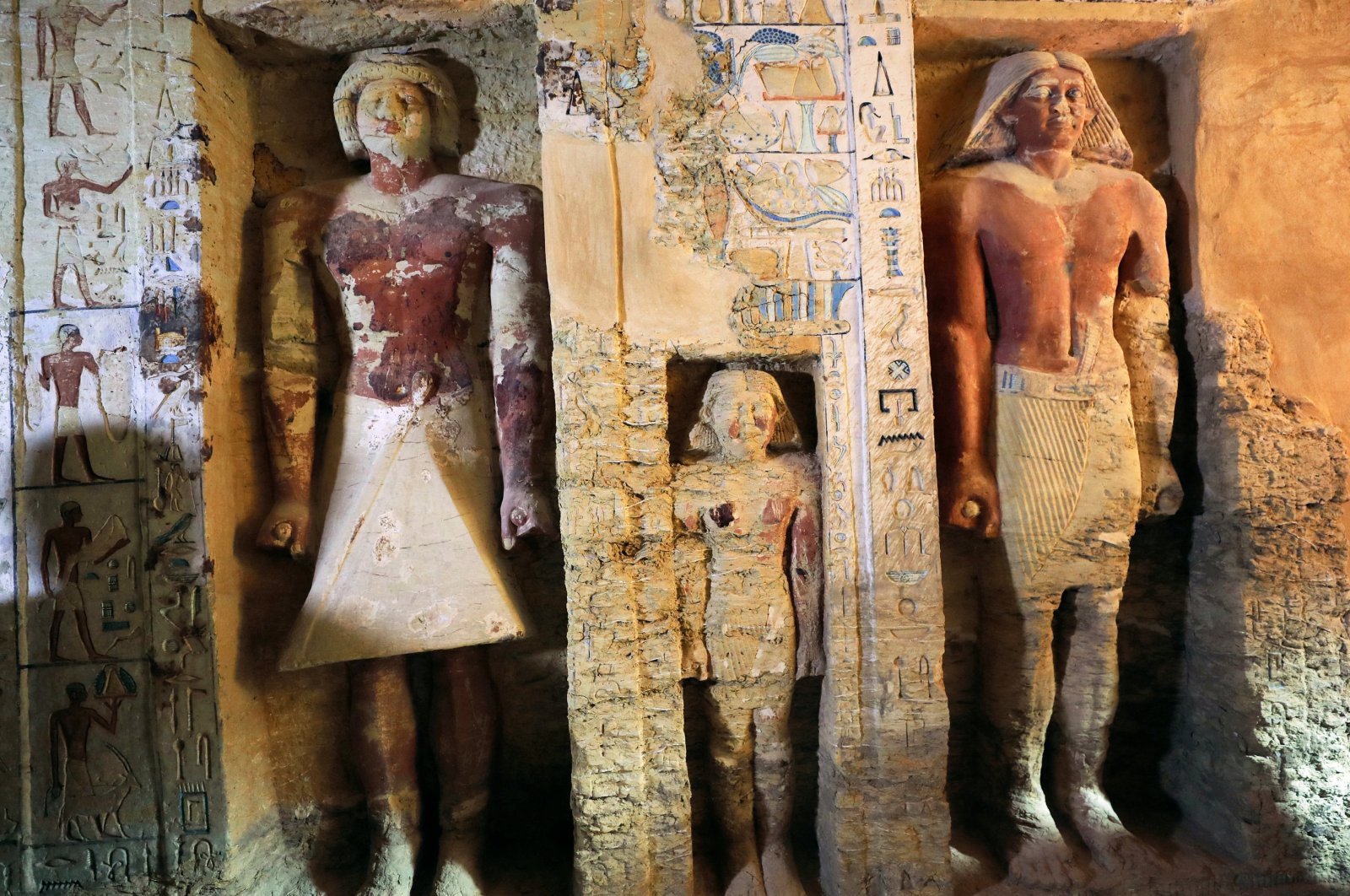 A view of the newly discovered tomb of "Wahtye," which dates from the rule of King Neferirkare Kakai, in the Saqqara area near its necropolis, in Giza, Egypt, Dec. 15, 2018. (Reuters Photo)
by French Press Agency - AFP Jan 16, 2021 9:51 pm
RECOMMENDED

Egypt announced Saturday the discovery of a new trove of treasures at the Saqqara necropolis south of Cairo, including an ancient funerary temple.

The tourism and antiquities ministry said the "major discoveries" made by a team of archaeologists headed by famed Egyptologist Zahi Hawass also included more than 50 sarcophagi.

The wooden sarcophagi, which date back to the New Kingdom, were found in 52 burial shafts at depths of 10 to 12 meters (40 feet), the ministry said in a statement. It quoted Hawass as saying that the "funerary temple of Queen Naert, the wife of King Teti" as well as three warehouses made of bricks were found on the site.

Saqqara, home to more than a dozen pyramids, ancient monasteries and animal burial sites, is a vast necropolis of the ancient Egyptian capital of Memphis, a UNESCO World Heritage Site.

In November, Egypt announced the discovery of more than 100 intact sarcophagi, in the largest such find of the year. The sealed wooden coffins, unveiled alongside statues of ancient deities, dated back to more than 2,500 years and belonged to top officials of the Late Period and the Ptolemaic period of ancient Egypt.

At the time, Antiquities and Tourism Minister Khaled al-Anani predicted that "Saqqara has yet to reveal all of its contents."

In the statement released Saturday, Hawass said the latest discovery could shed new light on the history of Saqqara during the New Kingdom, between the 16th century B.C. and the 11th century B.C. The discovery was made near the pyramid where King Teti, the first pharaoh of the Sixth Dynasty of the Old Kingdom, is buried.

Egypt hopes archaeological discoveries will spur tourism, a sector that has suffered multiple shocks, from a 2011 uprising to today's coronavirus pandemic.

Later this year, and after several delays, authorities hope to inaugurate a new museum – the Grand Egyptian Museum – at the Giza plateau, home to the famed Giza pyramids.

There has been a flurry of excavations in recent years in Saqqara, home to the step pyramid of Djoser, one of the earliest built in ancient Egypt.