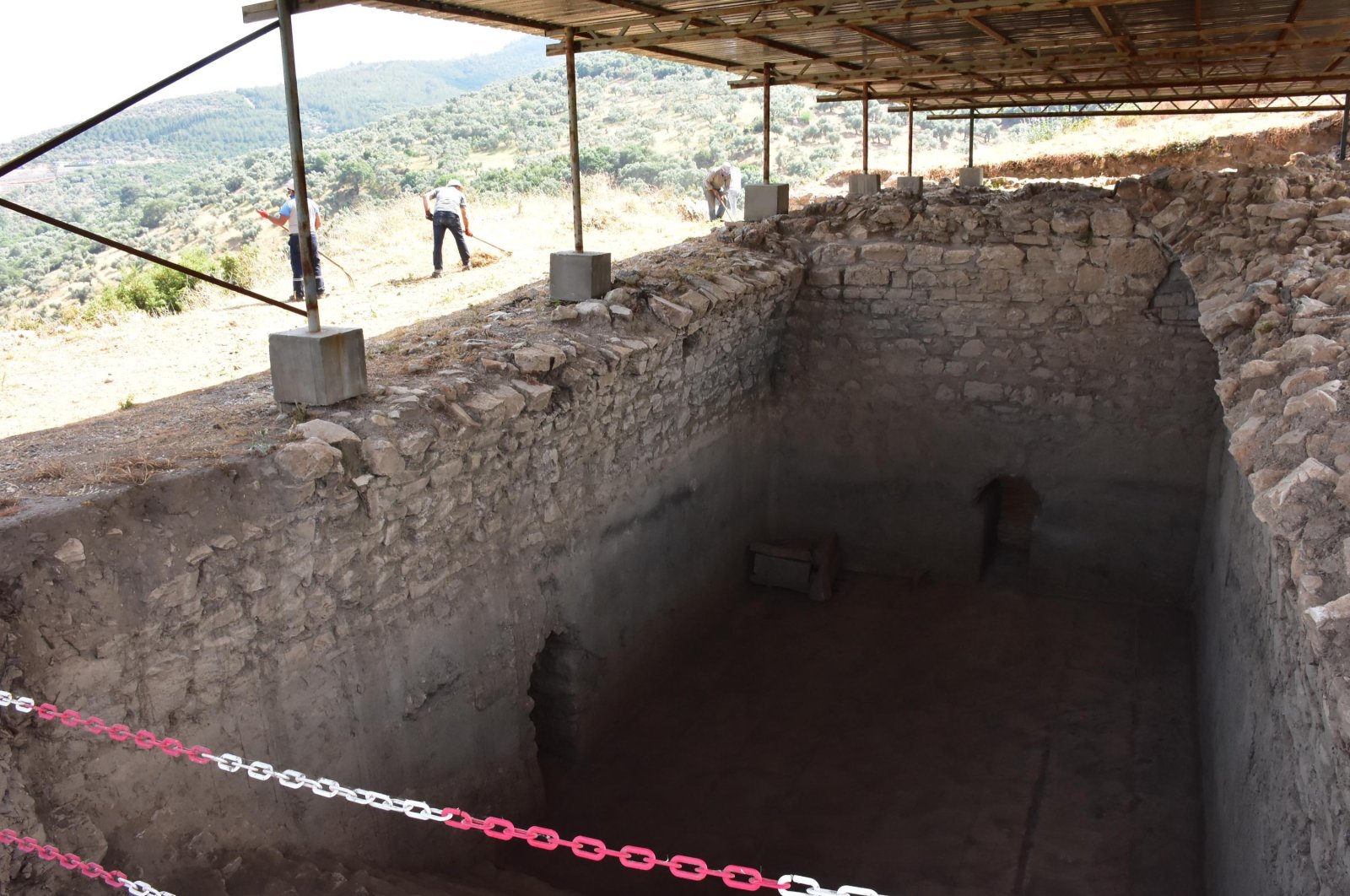 Specialists work around the excavation site of the cisterns at the classical city of Metropolis in Izmir, Turkey, May 30, 2021. (DHA Photo)
by Daily Sabah with DHA Jun 01, 2021 3:50 pm
RECOMMENDED

The ancient city of Metropolis in western Turkey's Izmir province, home to many a civilization throughout thousands of years of history, now stands as a source of enlightenment for contemporary archaeologists. Recently something that played a significant role in the lives of ancient townspeople was unearthed: cisterns.

Two of the four interconnected cisterns, discovered last year in the classical city of Metropolis in Izmir's Torbalı district, have been excavated archaeologists said. This year's excavation plan aims to unearth the other two cisterns and bring them to the forefront of cultural tourism.

The ancient city of Metropolis, also known as the "City of Mother Goddess," where excavations have been ongoing since 1990, has been a treasure trove for archaeologists. They have found traces of numerous civilizations, from the first settlements in the Late Neolithic Age to the Classical Age, from the Hellenistic Age to the Roman, Byzantine and Ottoman periods.

In the ancient city, where many monumental structures were unearthed, four interconnected cisterns were reached during last year's excavations. Two cisterns in this structure, located under a 7-meter (23-feet) earth fill, were revealed.

The structure, which is thought to have been used to meet the water needs of the city in the Late Roman Period, will contribute to revealing important information, findings and historical artifacts about the period.

Professor Serdar Aybek of Manisa Celal Bayar University's archeology department, who is the head of the excavation team, explained the importance of the cisterns for the ancient city. "(The city) has a deep-rooted history dating back to prehistoric times. The region has had fertile lands since prehistoric times. It has the fertility brought by the Küçük Menderes River. It is a region that has always been settled."

"The city we are standing on now has been inhabited since the Hellenistic period. It was developed as a planned city. With the growth of the population in the Roman period, new buildings were built. The cistern structure we are in now was built to meet the water needs in the Roman period. It gives us important information about the period in terms of water engineering," Aybek told Demirören News Agency (DHA).

"It is a structure built in the Roman period. It is located at the highest level of the city, which we call the Acropolis. Therefore, they are able to transfer the water collected in the acropolis to places on the lower slopes of the city more easily."

"The cisterns have a capacity of about 600 tons of water," he said. "We aim to reveal the remaining two parts with our (archaeological) work this year and bring this well-preserved and unique structure to cultural tourism."