Archaeologists unearth war victims from 13,000 years ago in Sudan 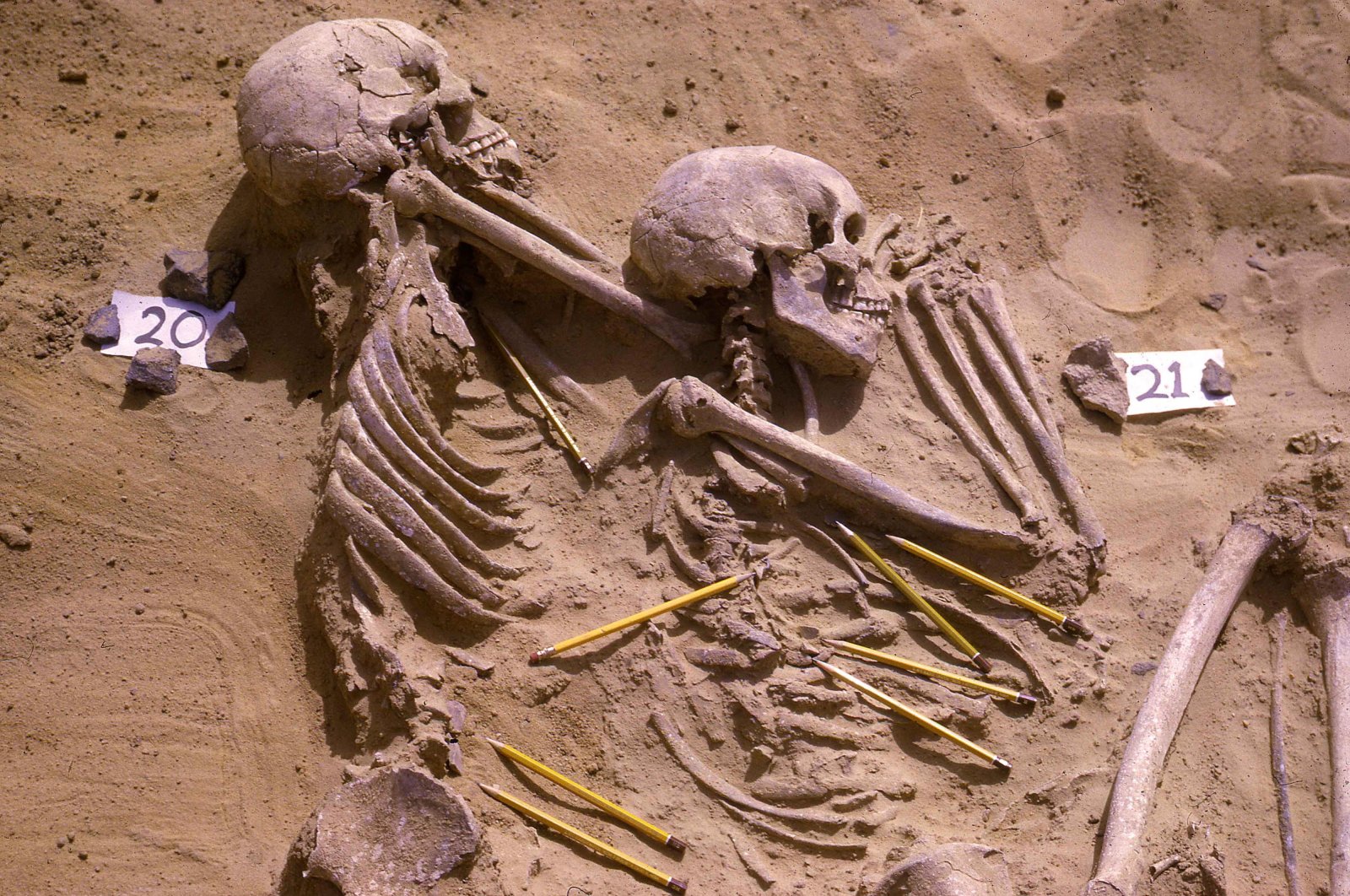 The double burial of individuals identified as JS 20 and JS 21 from among the 13,400-year-old Jebel Sahaba remains, some of the earliest evidence of human warfare, with pencils marking the position of associated stone artefacts, Sudan. (Reuters Photo)
by Reuters
May 30, 2021 11:02 pm

Even tens of millennia ago, humanity struggled with the impacts and ravages of war, and this has been exemplified once again recently as archaeological excavations revealed battered bodies buried in a cemetery at one of the world's oldest sites showing human warfare, proving all was not well among the peoples who inhabited the east bank of the Nile River in northern Sudan some 13,400 years ago.

Researchers said on Thursday a re-examination of remains from the Jebel Sahaba cemetery excavated in the 1960s provides new insight into this prehistoric bloodshed, including evidence that there had been a succession of violent encounters rather than a single deadly showdown as previously believed.

Of the skeletal remains of 61 men, women and children, 41 bore signs of at least one injury, mainly from projectile weapons including spears and arrows. Some wounds had healed, indicating the person survived the fighting.

Sixteen of them had both healed and unhealed wounds, indicating they survived one fight only to die in another. A microscopic examination identified wounds with remnants of stone weapons embedded in the bone.

The original 1960s analysis had identified only 20 people with any wounds and none with healed injuries.

The extensive and indiscriminate violence affected men and women equally, with children as young as 4 also wounded, said paleoanthropologist Isabelle Crevecoeur of the French National Centre for Scientific Research at the University of Bordeaux, lead author of the study published in the journal Scientific Reports.

"It appears that one of the main lethal properties sought was to slash and cause blood loss," Crevecoeur said.

While spears and arrows can be delivered from a distance, there also was evidence of close combat with numerous instances of parry fractures, blows to the forearm sustained when the arm is raised to protect the head, and broken hand bones.

Hunter-gatherers lived in the Nile Valley at the time, before the advent of agriculture. They hunted mammals such as antelope, caught fish and collected plants and roots. Their groups were small, perhaps not exceeding a hundred.

While it is difficult to know why they fought, it came during a time of climate change in the region from a dry period to a wetter one along with severe Nile flooding episodes, possibly triggering competition among rival clans for resources and territory.

"Unlike a specific battle or short war, violence appears to have unfortunately been a regular occurrence and part of the daily fabric of their lives," said study co-author Daniel Antoine, acting head of the Department of Egypt and Sudan and curator of bioarchaeology at the British Museum in London.

Crevecoeur said the archeological evidence indicated "recurrent, small-scale clashes probably in the form of raids, skirmishes, ambush attacks among hunter-gatherer groups, rather than one single conflict." Unknown cultural differences between groups also could have been at play, Crevecoeur added.

The site, now submerged under the large human-made reservoir called Lake Nasser, is the Nile Valley's earliest-known funerary complex and one of Africa's oldest. The human remains have been stored at the British Museum.

Philosophers long have pondered the contradictions of human nature. Our species has forged magnificent intellectual, technological and artistic achievements and has engaged in ghastly warfare. Archeological evidence has shown interpersonal violence in the human evolutionary lineage even predating the appearance of Homo sapiens more than 300,000 years ago.

"We believe our findings have important implications to the debate about the causes and form of warfare," Crevecoeur said. "What is certain is that acts of violence are recorded since hundreds of thousands of years ago, and are not restricted to our species, for example, also Neanderthals. But their motives are probably as complex and varied as we can imagine."