Dinosaur discovered in Argentina could be largest ever found 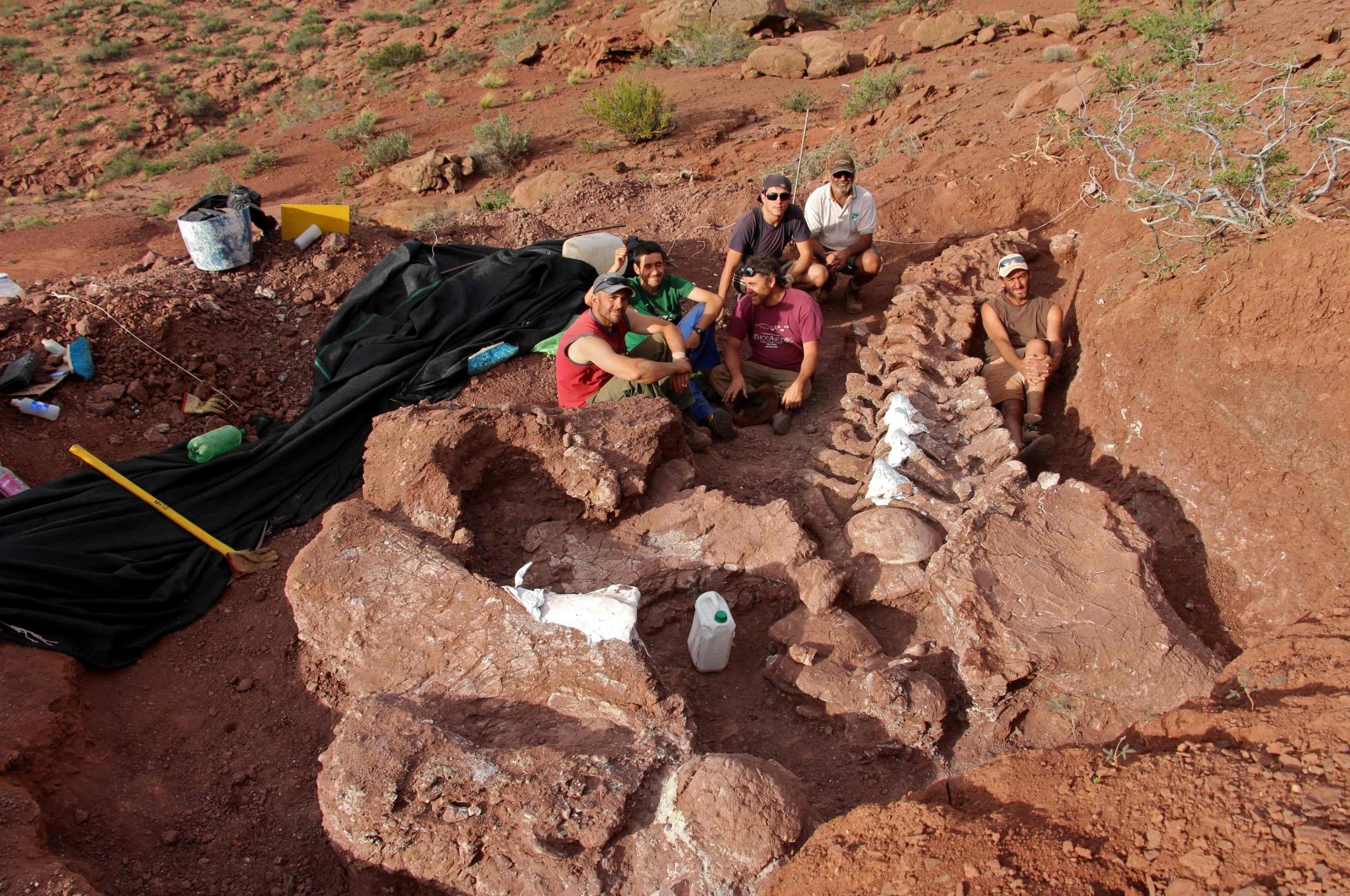 In this photo released by the CTyS-UNLaM Science Outreach Agency, paleontologists sit during an excavation in which 98-million-year-old fossils were found, at the Candeleros Formation in the Neuquen River Valley in southwest Argentina, Jan. 20, 2021. (Jose Luis Carballido/CTyS-UNLaM via AFP)
by French Press Agency - AFP Jan 22, 2021 4:17 pm
RECOMMENDED

Scientists believe gigantic, 98-million-year-old fossils that were discovered in southwestern Argentina may have belonged to the largest-known dinosaur.

Human-sized pieces of fossilized bone belonging to the giant sauropod appear to be 10%-20% larger than those attributed to Patagotitan mayorum, the biggest dinosaur ever identified, according to a statement Wednesday from the National University of La Matanza's CTYS scientific agency.

Sauropods were enormous long-necked, long-tailed, plant-eating dinosaurs – the largest terrestrial creatures to ever have lived.

Among them, Patagotitan mayorum, also from Argentina, weighed in at about 70 metric tons and was 40 meters (131 feet) long, or about the length of four school buses.

Alejandro Otero of Argentina's Museo de La Plata is working on piecing together a likeness of the new dinosaur from two-dozen vertebrae and bits of pelvic bone uncovered so far.

He has published a paper on the unidentified dinosaur for the scientific journal Cretaceous Research, according to the university statement.

The quest for more body parts, buried deep in rock, continues. For scientists, the holy grail will be the large femur or humerus bones, which are helpful in estimating a long-extinct creature's body mass.

The massive fossils were discovered in 2012 in the Neuquen River Valley, but excavation work only began in 2015, according to paleontologist Jose Luis Carballido of the Museo Egidio Feruglio.

"We have more than half the tail, a lot of hip bones," said Carballido, who also worked on the classification of Patagotitan a few years ago. "It's obviously still inside the rock, so we have a few more years of digging ahead of us."

The massive skeleton was found in a layer of rock dated to some 98 million years ago during the Upper Cretaceous period, added geologist Alberto Garrido, director of the Museum of Natural Sciences of Zapala.

"We suspect that the specimen may be complete or almost complete," he said. "Everything depends on what happens with the excavations. But regardless of whether it is bigger (than Patagotitan) or not, the discovery of an intact dinosaur of such dimensions is a novelty."