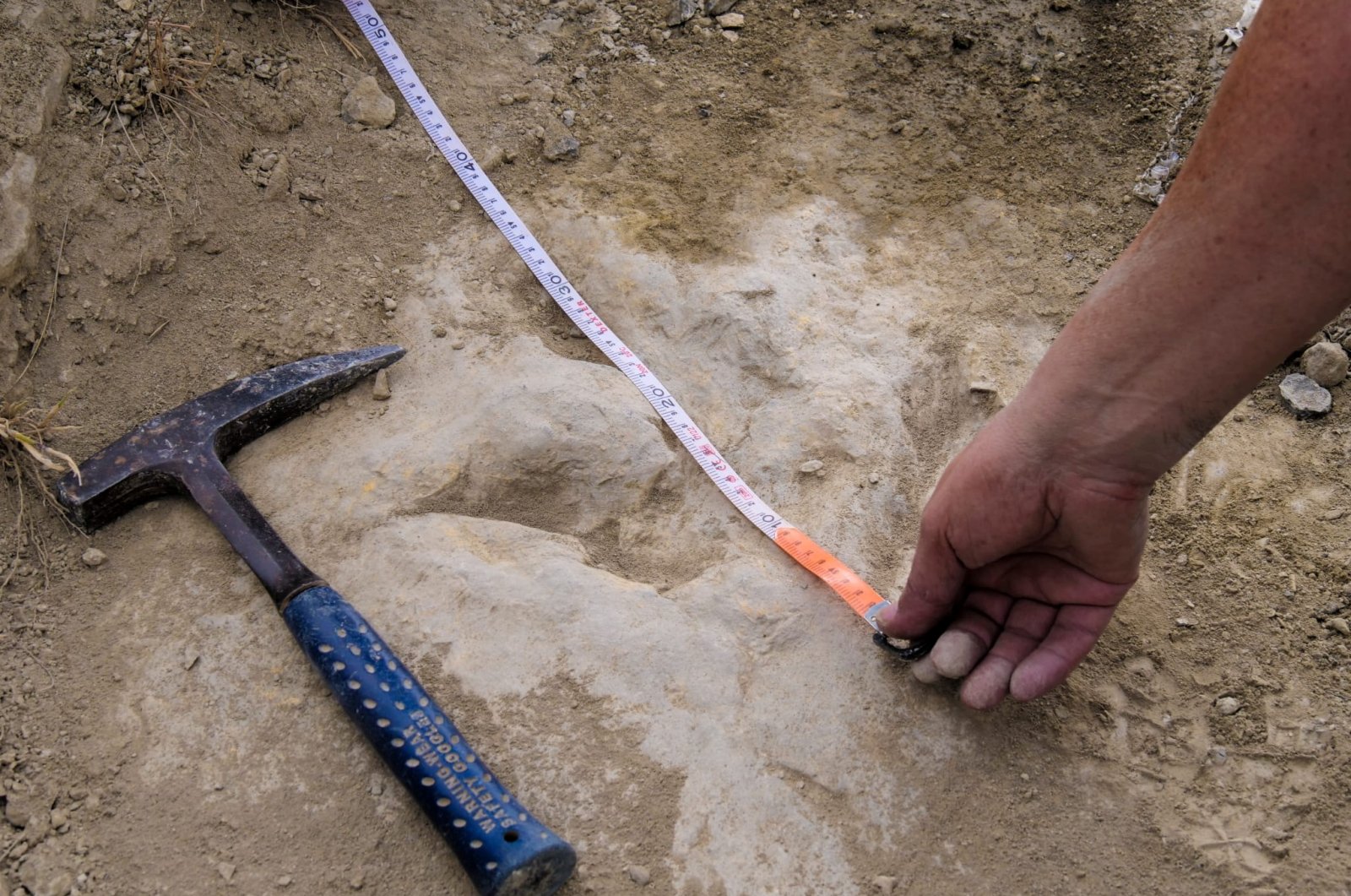 Researchers measure a fossilized dinosaur footprint made about 120 million years ago during the Cretaceous Period during field work in the La Rioja region, in northern Spain, in this undated handout picture. (Alberto Labrador via Reuters)
by Reuters Dec 13, 2021 4:19 pm
RECOMMENDED

New research confirms that carnivorous dinosaurs were pretty fast, in addition to being armed with menacing teeth inside muscular jaws, wielding dangerous claws on their hands and feet, as well as being equipped with keen vision and a powerful sense of smell.

Two trackways of Cretaceous Period fossilized footprints from about 120 million years ago discovered in northern Spain's La Rioja region show that the medium-sized meat-eating dinosaur species that made them could run at about 45 kph (28 mph), scientists said on Thursday.

Two trackways located about 20 meters (65 feet) apart were discovered, one with seven footprints and the other with five.

Speed only added to the arsenal of meat-eating dinosaurs like the species that left the footprints in Spain.

"Their capacity to run very quickly and their maneuvering abilities surely allowed them to chase prey very efficiently. And of course, I wouldn't like to be caught by this guy on a riverbank," said Pablo Navarro-Lorbes, a paleontology doctoral student at Universidad de La Rioja in Spain and lead author of the research published in the journal Scientific Reports.

The footprints bore characteristics showing they were made by a theropod, a group encompassing all the meat-eating dinosaurs, including Tyrannosaurus rex. Theropods were bipedal, with the largest perhaps 15 meters long.

The researchers believe the trackways were made by two different individuals of the same species. They suspect it was from one of two theropod families: the spinosaurs, many of which were fish-eaters, or carcharodontosaurs, known for shark-like teeth. The individuals were about 4-5 meters long and 2 meters tall, weighing 200-300 kilograms (440-660 pounds).

Running speed was calculated based on the relationship between the animal's hip height – estimated from the footprint length – and stride length. The stride length from one of the trackways was 5.6 meters, while the other was 5.2 meters.

One of the dinosaurs ran 31.7-44.6 kph – among the highest speed ever estimated for a dinosaur – and the other at 23.4-37.1 kph. One trackway indicates a smooth increase in speed. The other suggests an animal maneuvering as it ran.

Universidad de La Rioja paleontologist and study co-author Angelica Torices said speed helped not only in hunting but in fleeing danger including "bigger theropods that could see them as their prey."

Of the innumerable dinosaur tracks found worldwide, nearly all represent walking rather than running. The fastest estimated running speed based on footprints was a Jurassic Period theropod trackway in Utah at 55 kph.

Scientists also have calculated dinosaur speeds based on biomechanical models. The fastest using this method was the Jurassic turkey-sized theropod Compsognathus at 65 kph.

"There are several factors that dictate the running ability of a dinosaur," Navarro-Lorbes said.

"One of them is size. Some paleontologists think that theropods with sizes between 100 and 1,000 kilograms could have been some of the best dinosaur runners because of the relationship between their weight and muscular performance," Navarro-Lorbes added, with elongated legs another key factor.