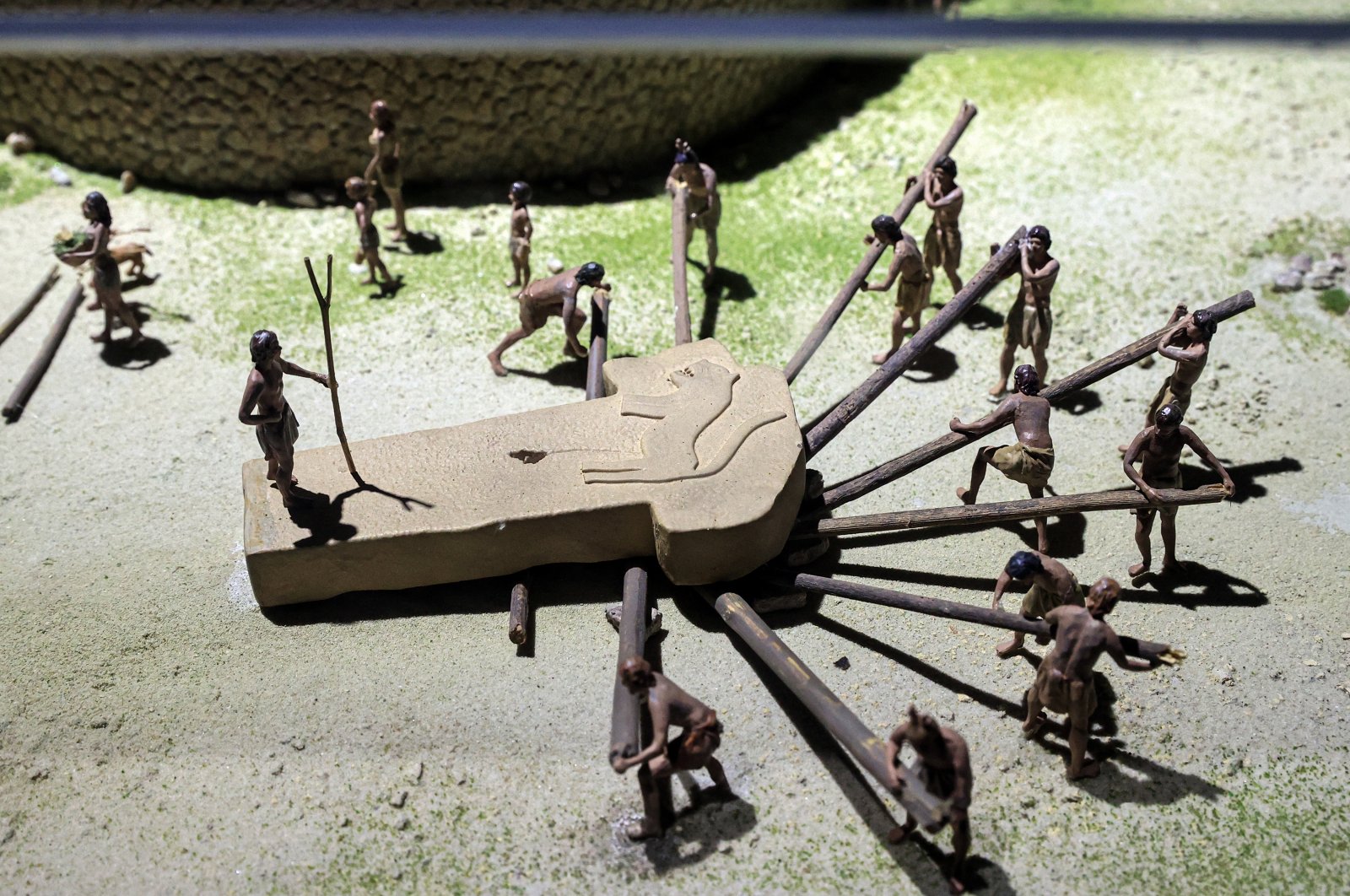 A photo from the "Back to Realverse: Göbeklitepe" exhibition, which met with art lovers as part of the Beyoğlu Cultural Road Festival, Istanbul, Turkey, June 6, 2022. (AA Photo)
by Daily Sabah Jun 27, 2022 11:06 am

Göbeklitepe, the starting point of the history that is thought to be the beginning of humanity, bears many mysteries amid its highly-decorated T-shaped megalith pillars

A recent discovery has revealed the traces of stone tool technology produced by the printing method transferred from Siberia to Göbeklitepe.

In Göbeklitepe, "Potbelly Hill" in Turkish, which is described as the "zero point of history" with its 12,000-year-old history, has unveiled numerous important artifacts and information belonging to the Neolithic period during the excavations carried out since the day it was discovered.

The site bears witness to many firsts in history, as in the hunter-gatherer period when Göbeklitepe was built, people lived in groups of 40 people on average. There were no inscriptions, wheels or even pottery, but the people of the time came together to build a temple. It was not only a temple but also a center where the people of the period gathered together. Also, the excavations revealed that people made huge shelters out of limestone. This was an unprecedented event in the hunter-gatherer era.

This year's excavations began with the aim of unearthing discoveries. Necmi Karul, the Göbeklitepe excavation team director, stated that excavations in some areas may even take 100 years.

Karul added that they plan to continue this year's Göbeklitepe excavations they started within the scope of the "Taş Tepeler Projesi" ("Stone Hills Project"), until mid-October.

"So far, we mainly focused on conservation during the process, yet, this year we also created new excavation areas. Clearing work continues on the remains of the second layer in Göbeklitepe. At the same time, the clearing and excavation work continues in the structure called Temple D, which is put into a protected area by placing a roof over it," he said.

"There were areas carved into the ground, we excavated in new areas that had not been dug before. The excavation process will continue until mid-October at the Göbeklitepe and Taş Tepeler Project sites this year. This means a process of approximately five months," he added.

He also drew attention that excavations should be carried out meticulously.

Emphasizing that archeology is a developing science that uses new technology, Karul said: "We think that some of the archaeological sites should be protected as reserve areas. On the one hand, the balance of excavation and protection must go together. Therefore, everything you uncover is open to destruction. We determine how the excavations will take shape in the coming years by establishing this balance."

Taş Tepeler, which can be roughly translated as "Stone Hills," is thought to be the beginning of settled life where shelter turned into dwellings and real villages that emerged 12,000 years ago. Consisting of 12 main sites, the area features Karahantepe, Harbetsuvan, Gürcütepe, Kurttepesi, Taşlıtepe, Sefertepe, Ayanlar, Yoğunburç, Sayburç, Çakmaktepe and Yenimahalle located on the Anatolian and Upper Mesopotamian areas. Findings obtained in these excavations are expected to shed light on humanity, ranging from the daily lives of people to their religious lives in the prehistoric period.

Izmir's Dokuz Eylül University (DEU) Caucasus Central Asia Archeology Research Center Director Semih Güneri stated that they had access to new archaeological artifacts transferred from Siberia to Göbeklitepe, adding that there were stone tools produced by the printing method as proof of technology.

“We see the products of printing microblade technology developed by ancient North Asian peoples in 30,000 B.C., in the Zagros Mountains region in the Early Holocene Period. The technology is then transferred to the Göbeklitepe culture. The printing microblades we are working on are 2-5 mm. They are tiny cutters. These are precision tools used in the finest works by arranging them on bone material. Stone tool production technology has obviously been moved from east to west from about 7,000 kilometers," he said.

Göbeklitepe, whose reputation exceeds its borders, hosts thousands of tourists every year.