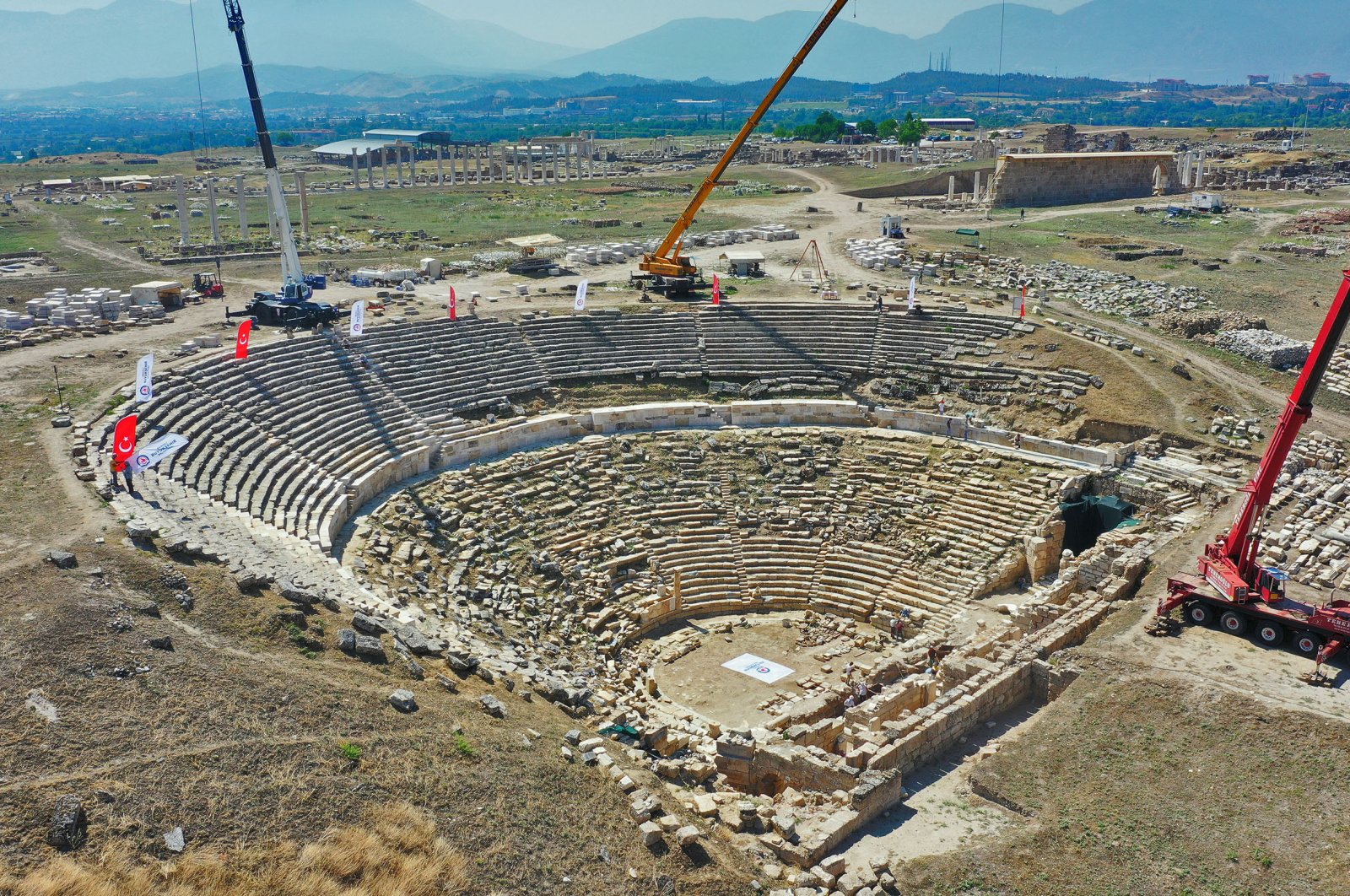 A photo from the restoration works at the Western Theater of the ancient city of Laodicea, Denizli, southwestern Turkey, July 13, 2020. (AA PHOTO)
by Anadolu Agency Jul 14, 2020 12:23 pm
Edited By Irem Yaşar
RECOMMENDED

The theater built in the ancient city of Laodicea in Turkey's southwestern Denizli province 2,200 years ago will host a series of art and cultural events as a result of the restoration work to be completed by the end of the year.

The Western Theater of the ancient city, which is on UNESCO's Tentative List of potential protected sites, will be a hub of cultural events once more after a 1,600-year interlude. The theater was abandoned around the fifth century.

According to the statement by the Denizli Metropolitan Municipality, city authorities are sovereign the continued unearthing of the ancient city of Laodicea. The municipality has undertaken the work as part of a protocol signed with the Ministry of Culture and Tourism in 2008.

The ancient city is home to one of the first seven churches recorded in history, as mentioned in the Bible's Book of Revelations, the final chapter of the New Testament.

Denizli Metropolitan Mayor Osman Zolan examined the work carried out in the Western Theater, which has the capacity to seat around 15,000 and received details about its restoration from professor Celal Şimşek, head of the Laodicea excavation delegation.

Zolan emphasized that Denizli was a very rich city in terms of cultural heritage, stating it was home to 19 ancient cities and many wonders, the most important being Laodicea.

Explaining that Laodicea's excavations would set an example to the rest of Turkey, Zolan stated: “With the support of the municipality and the work of the university, excavations have been carried out here for 12 months non-stop. A wonderful, exemplary project has been carried out in Laodicea. As a result of this, many wonders have emerged. Work has been started to reerect one of the two theaters located in the ancient city. As part of the protocol signed between the Metropolitan Municipality and the South Aegean Development Agency (GEKA), the theater will be reestablished this year. Our 2,200-year-old ancient theater will now host a series of arts and cultural events. We want to hold an event at the Western Theater as soon as possible. There will be concerts attended by President Recep Tayyip Erdoğan. We want one of those concerts to be at the Western Theater in Laodicea.”

Emphasizing that Denizli Metropolitan Municipality would continue to protect its historical values and transfer them to the future, Zolan said: “There are many places to be unearthed in Laodicea. I hope we will continue the same effort and work. Laodicea, which has been included on UNESCO's Tentative List of heritage sites, will hopefully become the forefront of these efforts to get UNESCO-protected status.”

Şimşek noted that his team had done a very good job in partnership with the Denizli Metropolitan Municipality, continuing: “Here, we have managed to squeeze 100 years of work into a period of 15-16 years. We are working in a way more feverish than ever before seen in the history of Turkey – and the world. We are applying restoration techniques of an international standard.”

Şimşek stated that 70% of the work has been completed in the upper part of the theater where the audience will be seated, with the remaining 30% set to be finished within a month. Meanwhile, work on the lower part will be finished by the end of the year.