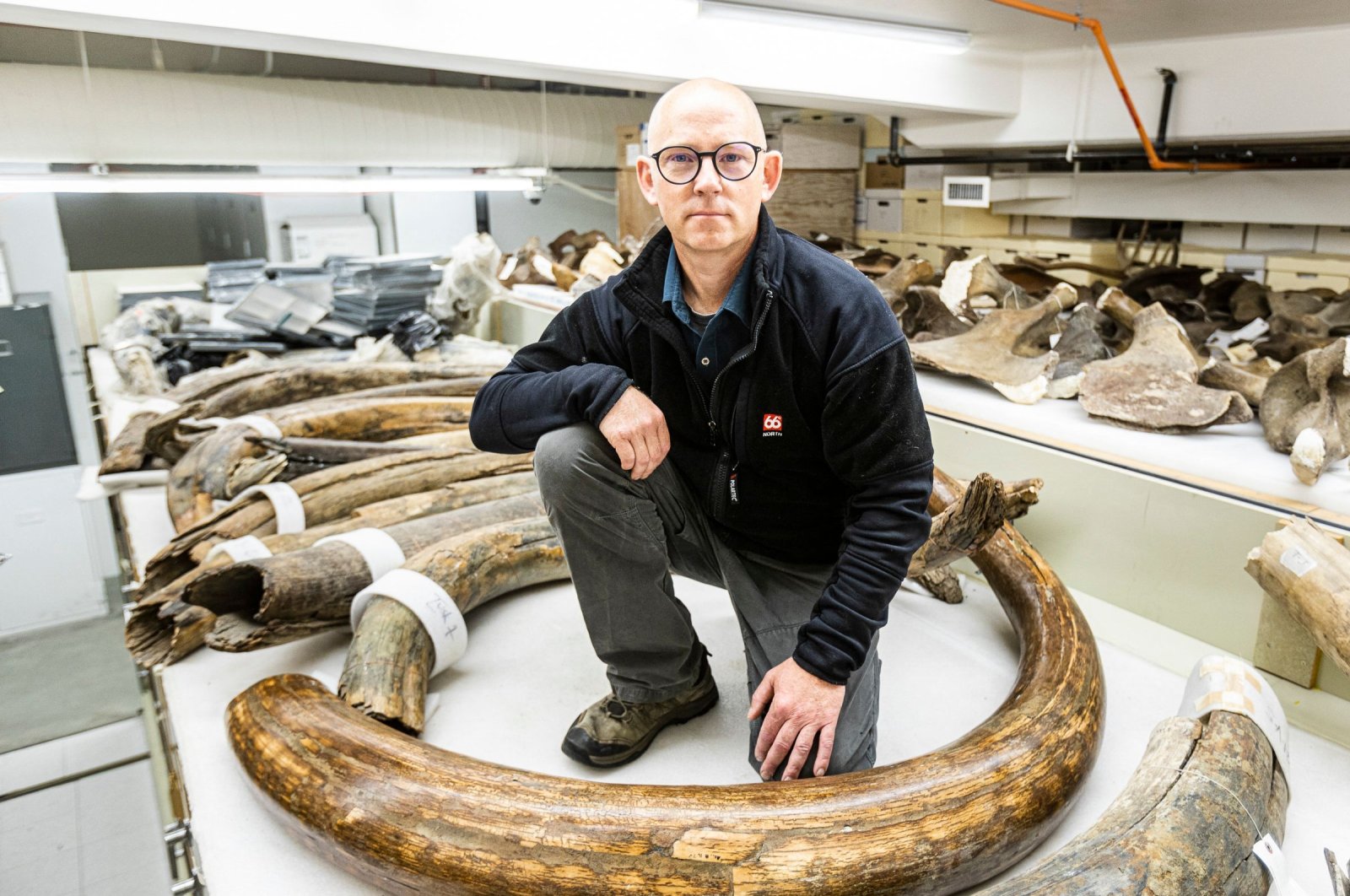 Mat Wooller, director of the Alaska Stable Isotope Facility, kneels among a collection of mammoth tusks at the University of Alaska Museum of the North, August 12, 2021. (Photo by JR ANCHETA / University of Alaska Fairbanks via AFP)
by French Press Agency - AFP Aug 13, 2021 10:50 am
RECOMMENDED

The mammoths were not as sedentary as was previously thought, a new study reveals.

Walking the equivalent of twice around the world during a life lasting 28 years, one woolly mammoth whose steps have been traced by researchers has proven the huge beast was a long-distance wanderer.

The findings, published Thursday in the prestigious journal Science, could shed light on theories about why the mammoth, whose teeth were bigger than the human fist, became extinct.

"In all popular culture – for example, if you watch (the cartoon) 'Ice Age' – there are always mammoths who move around a lot," said Clement Bataille, assistant professor at the University of Ottawa and one of the lead authors of the study.

But there is no clear reason why mammoths should have trekked great distances "because it is such an enormous animal that moving around uses a lot of energy," he told Agence France-Presse (AFP).

The researchers were amazed by the results: the mammoth they studied probably walked around 70,000 kilometers (43,500 miles), and did not stay just on the plains of Alaska as they expected.

"We see that it traveled throughout Alaska, so an immense territory," said Bataille. "It was really a surprise."

Readings on a tusk

For their study, the researchers selected the tusks of a male woolly mammoth who lived at the end of the last ice age.

The animal – named "Kik" after a local river – lived relatively close to the time of the extinction of the species, around 13,000 years ago.

One of the two tusks was cut in half to take readings of strontium isotope ratios.

Strontium is a chemical element similar to limestone and is present in soil. It is transmitted to vegetation and, when eaten, is deposited in bones, teeth ... or tusks.

The tusks grow throughout a mammal's life, with the tip reflecting the first years of life, and the base representing the final years.

Isotope ratios are different depending on geology, and Bataille developed an isotopic map of the region.

By comparing it with the data from the tusks, it was possible to track when and where the mammoth had been.

At the time, glaciers covered all of the Brooks Range of mountains in the north and the Alaska Range in the south, with the plain of the Yukon River in the center.

The animal returned regularly to some areas, where it could stay for several years. But his movements also changed greatly depending on his age, before he eventually died of hunger.

During the first two years of his life, researchers were even able to observe signs of breastfeeding.

"What was really surprising was that after the teenage years, the isotopic variations start to be much more important," said Bataille.

Scientists say the male may have been solitary, and moving from herd to herd to reproduce. Or he could have been facing a drought or a harsh winter, forcing him to seek a new area where food was more plentiful.

Whether for genetic diversity, or due to scarce resources, it is "clear that this species needed an extremely large area "to live," said Bataille.

But, at the time of the transition from the ice age to the interglacial period – when they went extinct – "the area shrank because more forests grew" and "humans put quite a lot of pressure on southern Alaska, where mammoths probably moved much less."

Understanding factors that led to the disappearance of mammoths may help protect other threatened megafauna species, such as caribou or elephants.

With today's climate changing, and humans often restricting big species to parks and reserves, Bataille said, "do we want our children 1,000 years from now to view elephants the same way we view mammoths today?"