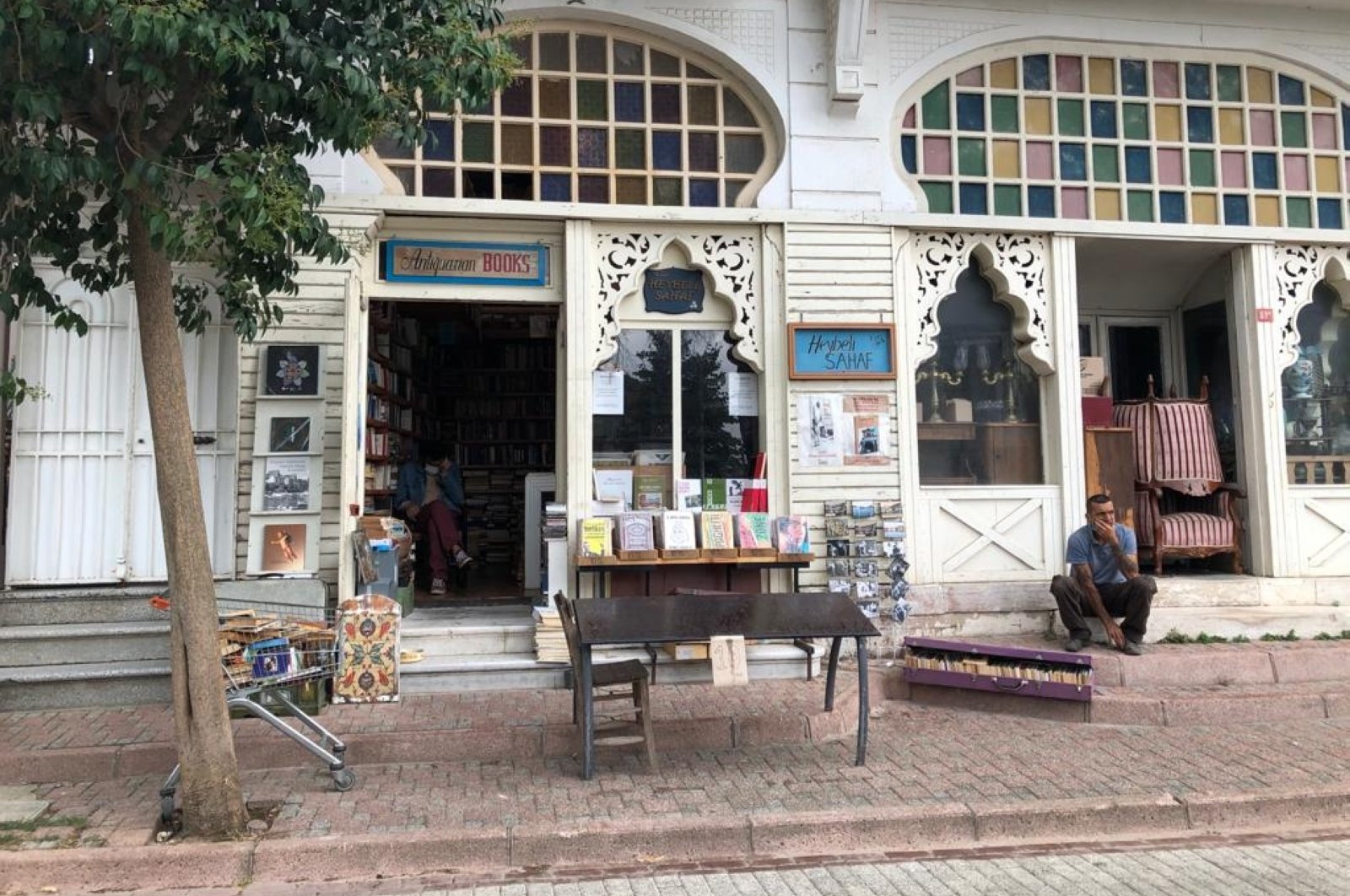 The exterior of the bookstore, decorated with oriental elements and stained colorful glass. (Photo by Matt Hanson)
by Matt Hanson Sep 23, 2020 11:10 am
Edited By Mindy Ann Yartaşı

A mission to explore Istanbul’s hidden gems and get lost in a sea of books and other printed curiosities led me to the second-largest of the Prince Islands, where a sense of nostalgia whirls free

It was on a gray, drizzly Sunday dedicated to late summer exploring when I spotted a shopping cart brimming with books in front of an unlit doorway on Heybeliada, the second-largest of Istanbul's Prince Islands. The storefront mantle above read, “Antiquarian Books” and beside it by a polished window decorated with latticed wood was its other rustic sign, “Heybeli Sahaf.”

Staple fixtures among Istanbul’s narrow, winding streets, sahafs are a type of secondhand bookstore that can be found all over Turkey. The small shops offer the bookish, vintage and otherwise archaic media of bygone decades for those out to discover a new story, hear another voice, or read and listen again to their peculiar tastes.

Crowned by a colorful glass facade, the quaint bookshop anchors the breezy, spacious intersection it shares with a vibrant florist, a furniture repairman and a trendy espresso cafe. Nazım Hikmet Erkan, the otherwise melancholic and aloof bookseller and shopkeeper, was reading, grumbling and walking about the corner as I approached. Before I could reach the shop, a man stopped for a moment outside and raised his voice loud enough for Erkan to hear. He requested a book. Erkan scratched his head as the man outside grew more impatient by the second. A sahaf may be a place of compulsory buys and whimsical wants, but at its heart, it is – at least according to the dreamy poise of Erkan – a space to stop, breathe and ponder. But the impatient customer had missed the memo.

As with all bookshops, temptation beckoned near the door, where books aplenty had been arranged so weary, excitable eyes could easily sweep across their titles. Among the stacks outside the sahaf was a book on the Turkish poet Nazım Hikmet, the laureate of modern Turkish verse, a study of the bard’s influence on the stage and screen. Farther down the pile was a photographic lineup highlighting the work of French humanist photographer Henri Cartier-Bresson and the "Eye of Istanbul," Armenian Turkish photojournalist Ara Güler. For hopeful aficionados looking to delve further behind the lens, Walter Benjamin’s “A Short History of Photography” was also in the mix. Beside them was an indispensable volume on the Prince Islands, “Heybeliada” by local historian, professor Akillas Millas.

Nearby, a rickety brown table claiming space on the sidewalk caught my eye. It had purposefully been left empty, sporting a makeshift, stained sign that read "10 liras" and promised the opportunity to spread out the literary treasures that surely awaited within. The tabletop offering a quiet place to peruse literary gems and the teetering stack of books successfully lured me through the door. Once inside, external light, diffused by ample cloud cover, filtered in softly, welcoming me as dust particles floated off the broken spines and yellowed pages of the many shelves tested by the weight of the bound and inked leaves. There are two floors, but Erkan cautions patrons against venturing above. It is dangerous and the books are much older – that was what he said, anyway. A more adventurous patron may have interpreted this warning as an irresistible challenge, but I opted to avoid the potential risk for my maiden visit.

Ideally, entering the otherworldly, somewhat anachronistic suspension of time that is the sahaf, particularly when distanced on an island in the Marmara Sea, means discovering many things anew. And Antiquarian Books does not disappoint. Behind its brittle covers and sepia-toned guise is a localized complex of chance breakthroughs.

Whether horizontal, vertical, stacked on the floor or crammed against planks and walls, the sprawl of books and printed material inside Heybeli Sahaf can be daunting for roving minds trying to scan for favorite wordsmiths and beloved voices of silent storytelling.

Luckily, Erken has instilled some order to the chaos, not only for the Turkish literature but also for his broad, pointed section for foreign language literature – though even this system, as per sahaf tradition, requires ponderous meandering through the titles. The English section's top shelf, for example, has a timeless quality, as popular nonfiction by Yuval Noah Harari appears next to an antique edition of the 1898 short story collection “A Day’s Work” by English author Rudyard Kipling. Off to the side, the sunflower-hued cover of Illuminations and a series of essays by German Jewish philosopher Walter Benjamin are upright and front-facing, with the author’s profile unmissable. With an introduction by fellow German Jewish philosopher Hannah Arendt, Benjamin's work is a renowned trove of insights on art, literature and philosophy, something like a sahaf within the sahaf.

There is some semblance of sections on the first floor of the sahaf. So, if browsing for hours isn't your cup of tea, the first floor of Antiquarian Books could be divided into four sections: the lefthand side is dedicated to Turkish literature in general; the anterior to foreign language literature, including English, French, German and Greek; the right side to large-format photography, fashion, travel and design coffee table books; and the posterior to music records.

The land and its letters

Bookshops offer the opportunity to penetrate the voices, ideas, experience, drama and imagination shared throughout the world. Sahafs offer an even deeper, quieter experience, often forcing you to hunt for the knowledge among an eclectic – often disorganized – medley of poetry and prose. As such, it could be said sahaf owners like Erkan sell time-worn narratives to the rest of humanity.

The shop is brimming with myths, facts, stories, folktales, history and much more, many of which are based on Turkey, Istanbul and the Prince Islands. The words harbored within are just waiting to snag curious minds who stray for a moment only to end up captivated by the stratified pages. Adding to the charm, the bustling island and Turkey's deep-rooted history offer the perfect backdrop for the current of this literary phenomenon to meander and flow.

For those interested in checking out Heybeliada and exploring the stacks of Antiquarian Books, your best bet is to catch the first ferry of the day to avoid crowds and maximize your time on the island. There are two options, fast or conventional ferries, and both depart from Kabataş on Istanbul's European side. Ferry schedules can be found on Istanbul’s Sea Buses Corp.'s (İDO) website. It takes a little less than an hour to reach the island, and the cost of a round trip usually ranges between TL 10 to TL 20* ($1.30 to $2.60) per person.