In a hall of books: A quartet of Moda sahaf 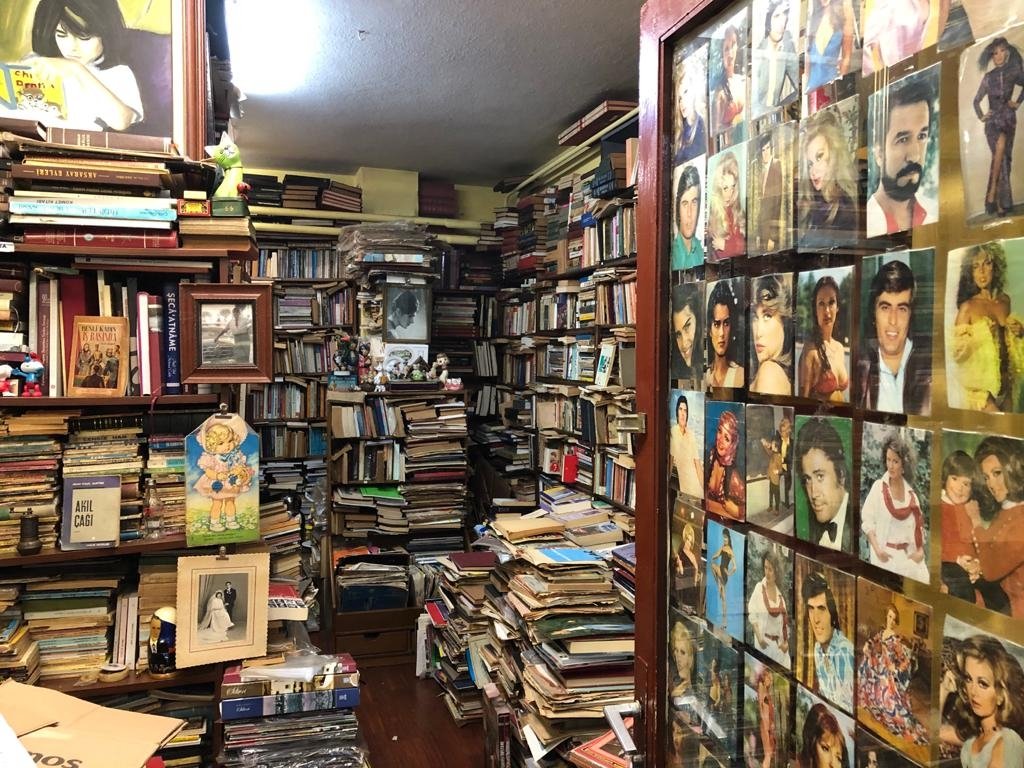 In the complex housing Moda Sahne, a venue for stage and screen, showcasing independent productions of classical drama, original plays, art-house cinema and modern dance, there are also used books

The theater is closed, and the actors have been out of work for months but there is an unscripted, impromptu play happening not far from the stage. A man, in a loud, dramatic, speaking voice booms across the hallway around the corner from where posters for bygone productions display the pantheon of famous playwrights Bertolt Brecht, Anton Chekhov and William Shakespeare, along with local Turkish dramaturgists.

The monologist is older, likely retired, yet youthfully energetic. He is worldly, characterful and unselfconscious while demanding the attention of multiple listeners, and exacting affirmative responses from them, exclamatory praise and mechanical laughter. He is among secondhand booksellers. They file in, prior to noon, greeting each other with dreary, rote phrases, coming in from a gray, Monday rain.

A tea-stimulated young man bursts in, shouting to abandon in his postal uniform, delivering good news. There are more books yet to hold, discuss and perhaps sell out of the overstocked, literary obscurities that line the shelves and cover the ground in stacks within the four sahafs, or secondhand bookstores, open inside Moda Sahne. It is a mini-mall of used books that welcome under white lighting that glares onto dusty heaps of cultural history.

The older man emerges from a sahaf called Titiz, which can be translated from Turkish as Critical or Meticulous. It is a requirement that a sahaf exhibit these qualities since the many and sundry titles in their possession are a logistical nightmare of cataloging and literacy. Yet, the sahaf bookseller assumes an extraordinary role, one which they perform often with the dash and quirks of the most memorable of onstage figures.

Yet, during pandemic days, the sahaf bookseller must practice trade customs also forwarded by coffeehouses, namely to purvey their goods before their storefronts, out in the open, so as not to attract passersby inside, where the stifling air is liable to communicate the infamous virus that is proving beyond centennial import since 1918. Without a word, a woman at her desk in Titiz swings her finger back and forth behind a strip of plastic, forbidding entry.

To read or not to read

The outward presentation of Titiz is, like all sahaf facades, a smorgasbord of variegating multimedia, as immediately overwhelming as it is irresistibly enticing. The puckering visages of Norah Jones, Marilyn Monroe and Elvis Presley surround a hardcover, large-format coffee table book on popular clothes in Turkey, an exotic affair that seems all the more outlandish in contrast to apple-pie Americana alongside.

The cover image of the book that might translate to “Popular Dress in Turkey, 1873” features two men and a woman in striped, long robes. Their headwear is as elaborate as their sleeve cuts are wide, and they seem utterly indifferent to the lens in comparison to the images of the glamorous entertainers that encircle them. From there, the books of Titiz exemplify a similar balance, between eras Ottoman and Republican, Western and Turkish.

A novel by Bilge Karasu beside a treatise of Ludwig Wittgenstein is not dissimilar from a memoir by Ayfer Tunç beside the Snoopy cartoons of Charles M. Schulz. It is, according to the stock of Titiz, the result of eponymously meticulous selections. Such is the case with their neighbor Sercan Sahaf, which itself is also the home of Khalkedon Rare Books. Out of the slim outfit, a band of sharp young men do their work from laptops, opening new packages of antiquarian specialties.

There are shouts of bookish glee that echo down the Moda Sahne sahaf hall, from its end where the workers of Sercan Sahaf and Khalkedon Rare Books are realizing the accumulation of a prestigious, one-of-a-kind collection of literary legacy in Turkey. Following a passing question as to the significance of an Ottoman-Turkish journal on display, one quite vocal young man on staff responds with astonishing abruptness, kindly, yet to the point.

Besides being the home of Khalkedon Rare Books, the name a hearkening to the prehistoric settlement of Kadıköy, in English spelled Chalcedon, Sercan Sahaf is also a member of the International League of Antiquarian Booksellers, the Independent Online Booksellers Association and the International Map Collectors’ Society. It is a little-known fact that Istanbul’s sahaf shops preserve some of the world’s most invaluable cartographic records.

Whether it is nobler on the page

Across from the decidedly vocal and social Sercan Sahaf and Titiz is an otherwise reclusive sort of sahaf bookseller. His place of business is called Eflatun Sahaf. On entering the bijou space within the shop, crowded by shelves of squeezed hardcover spines and piles of softcovers strewn haphazard, the walls seem to narrow. At the end is the man himself, silently poised over a desk under a ceiling that is about nearly as low as the top of his head.

In his window are the spectrum of interests that lie somewhere buried deep in the collective Turkish and international subconsciouses of the literate and literati. From the melancholic princess of Turkish literature, Tezer Özlü, to the mad mountaineer of iconoclastic philosophical controversy, Friedrich Nietzsche, a surprisingly encompassing, if not random, sweep of bibliophilic insights ensues.

Among mostly Turkish titles, as would be expected, there are a smattering of finds to be had in English, yet their subjects appear as arbitrary as the very presence of an English book itself in context. “The Penguin Atlas of Medieval History” is embedded between a number of Turkish history books, as is Arthur Koestler’s much-contested “The Thirteenth Tribe,” which argues that Ashkenazi Jews are descended from the Turkic Khazar people.

These kinds of surprises are not uncommon at the Istanbul sahaf, and the slew of them inside Moda Sahne are no different in that respect. Their very visitation is cause for delight, as is the case particularly with the kitschy Rengin Sahaf, run by a casual woman who takes to her desk while watching daytime family reality dramas. Her sahaf bookshop doubles as a kind of altar to outmoded fame.

The door to Rengin Sahaf is filled with photographed portraits of Turkish celebrities since the advent of color film. They are tuxedoed and sun-tanned, dressed to the nines and lavishly adorned, as they look back from times long past. Inside her shop are the voices of those men and women who prioritized the conveyance of their thought in words over the fashion of their appearance. To the living, however, especially in these shifting times, any individual author, voice or face in the growing stacks is lucky to hold a few seconds of fleeting attention.