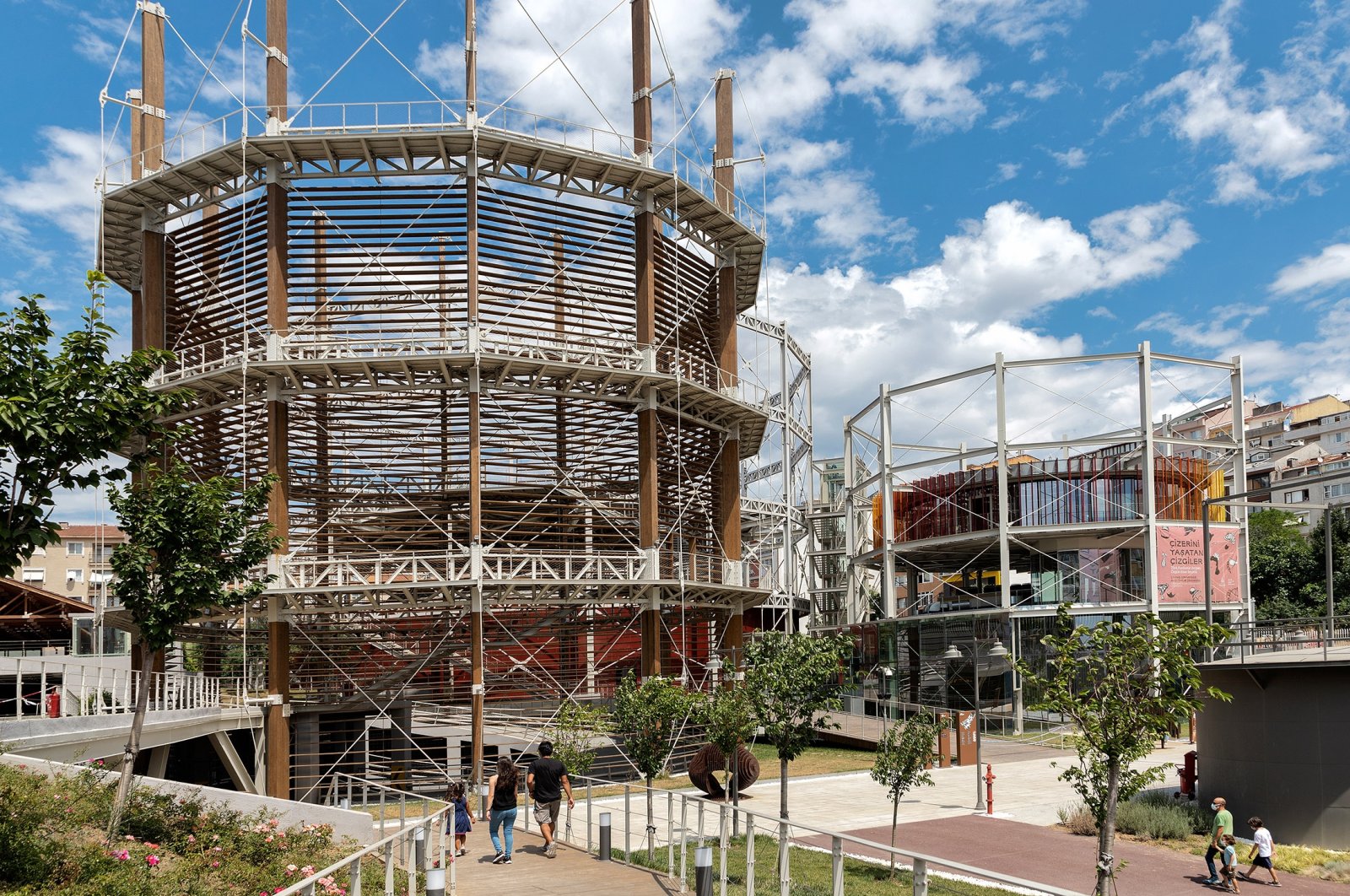 The historical Hasanpaşa Gasworks, which was built in 1892, was restored and turned into a Culture and Art Center. (Shutterstock Photo)
by Leyla Yvonne Ergil
Oct 12, 2021 10:28 am

There’s a new way of hanging out in Istanbul as two magnificent social and entertainment complexes, one on the Asian and the other on the European side of the city, are offering exercise and art workshops, musical, theatrical performances and open-air dining, as well as showcasing new kinds of museums.

Müze Gazhane is a spectacular new complex in Kadıköy’s Hasanpaşa neighborhood that offers a combination of art, culture and physical activities in a renovated historical gasworks building. The Hasanpaşa Gazhanesi was Istanbul’s last gasworks facility that operated for 101 years since its establishment in 1891. Closed down in 1993, the historical gashouse has been completely renovated to create a new “living area” and meeting ground for Istanbulites with a penchant for arts and culture.

Situated on an area of 32,000 square meters (344,445 square feet) and containing multiple indoor and outdoor venues and dining establishments, Müze Gazhane opened on July 9 this summer.

Just to give you an idea of how innovative and impressive this new complex is, there is a Climate Museum (Iklim Müzesi), a Caricatures and Humor Museum (Karikatür ve Mizah Müzesi), a Children’s Science Center (Çocuk Bilim Merkezi), a library by the name of late veteran architect Afife Batur – the advisor to Müze Gazhane's transformation project, the Gazhane Gallery and two municipal theaters and a concert hall, as well as the İstanbul Kitapçısı book store.

There are also a number of cafes plus various quiet, and not so quiet, workspaces. Müze Gazhane also hosts multiple daily workshops on a variety of subjects like fitness, arts, cooking and children’s activities. I almost forgot to mention the most important feature of this new-wave socializing complex is the enormous open space in the facility’s courtyard, which hosts top-notch performances under the stars.

The Climate Museum is an especially valuable and timely addition to the city’s roster of museums as the exhibition seeks to answer some of the questions surrounding the climate crisis the world is currently facing. The fact that it is housed in a facility belonging to an industry that used to burn fossil fuels is especially apropos, as its sole purpose now is to inform, create awareness and seek solutions to this pressing global problem. The Children’s Science Center consists of three different sections of exhibitions showcasing 24 pieces, as well as a workshop space and a play area for children, all of which are centered on the theme of understanding the processes involved in producing energy and how to best utilize them.

One of the most exciting new additions to the city, brought to us by this magnificent new complex, is a library and workspace that is open 24 hours a day, seven days a week. The IBB Afife Batur Kütüphanesi library contains nearly 10,000 books and digital archives on academic topics such as culture, arts, science, history, city planning archeology, ecology, philosophy and sociology. The amply-lit space with towering ceilings also provides excellent space for work or study and there are both quiet and non-quiet areas available. Meanwhile, the onsite bookstore, İstanbul Kitapçısı, also has an entire section devoted to topics surrounding the environment and climate change.

Yet another enticing feature is the inclusion of a Caricature and Humor Museum, which showcases a curated collection of caricatures drawn by Turkish artists. There are also seven sculptures located in the facility's spacious green garden. They were created using waste materials from the Haliç Tersanesi shipyard. For those with wheels, there is an enclosed parking garage. Just remember that the museums are closed on Mondays.

It would be remiss of me to not mention some of the wonderful activities going on this month at Müze Gazhane, just to give an idea of why this is exactly the type of entertainment complex we all need in our lives. First of all, twice a week there are morning cardio and pilates classes. After that, each day, there are a wide array of workshops that are totally free of charge. On any given day, these could include water painting, knitting, ballet or sourdough breadmaking for adults and storytelling, music or juggling workshops for children. In the evenings, there are seminars, theatrical performances, stand-up comedy shows and musical performances, most of which are free of charge, with only special performances requiring tickets.

Coming up this month, Müze Gazhane will be hosting the Istanbul Comics & Arts Festival from Oct. 16 to Oct. 17, which will consist of a variety of topical events and activities taking place in multiple venues within the complex. Then on Oct. 31, Müze Gazhane will also be hosting the Istanbul Foundation for Culture and Arts (IKSV) Theater Festival.

The newest addition to Istanbul’s entertainment scene is a spectacular open-air social space that includes a performance venue and an upscale food court, offering some of the town’s hippest cuisines.

Located in a 2,500-square-meter space in the garden of the Istanbul Lütfi Kırdar International Congress and Exhibition Center, where Maçka Park and Harbiye meet, dekk Istanbul has views of the cherished Maçka Park on one side and an elevated view of the Bosporus on the other.

The vision for dekk Istanbul is to introduce a new social atmosphere in a venue offering top-notch dining options along with musical performances and a variety of physical activity workshops.

The space opened on Oct. 1 to much fanfare including fitness activities such as skating and a performance by popular Turkish alternative guitarist-singer Evrencan Gündüz. Dekk Istanbul also offers daily morning yoga and pilates sessions followed by workshops on physical activities such as dance and skating in the afternoons. On Wednesday the singer-songwriter Kalben will perform and next week the venue will be celebrating Oktoberfest.

The musical performances are just extra, as the venue is enticing in and of itself for its wonderful selection of dining options, housed in a courtyard in which a number of popular Istanbul eateries will be serving up their specialties. A gastronomical meeting grounds of sorts, the venues serving in dekk include Banko Burger, Nappo Pizza, Yumami, Rita Deli, Markus and Nino Bakery to name a few.

Based in Caddebostan, Banko Burger dishes up a variety of gourmet burgers in addition to comfort food classics such as fried chicken, chili dogs and falafels. From sweet potato fries to French fries slathered in truffle oil and parmesan, Banko Burger is truly next-level when it comes to fast food as even their selection of hand-crafted sauces, including harissa, wasabi mayo and lime and tahini, will attest to their finesse.

Nappo Pizza has brought authentic Napolitano pizza to Kanyon and now finally to dekk Istanbul. It includes a variety of gourmet toppings from Italy ranging from burrata to pesto and prosciutto to salami.

Yumami serves up elevated Asian-style street food and Rita Deli, which gained fame amongst the expats and local hipster community in Moda, is now serving up their famous Reuben sandwiches at dekk.

In a special treat, the proprietors of Markus Prime Rib Society and Markus Tavern, hands down one of the hippest places to enjoy ribs and musical performances housed in the Maslak Oto Sanayii, also serve up ribs at dekk.

Nino Bakery, which was opened by a Turkish baker who went to culinary school and worked at multiple Michelin-star restaurants in the U.S. and brought his sourdough expertise and starter to Nişantaşı, is also now at dekk Istanbul.

The brainchild of the minds behind the magnificent Feriye entertainment complex in Ortaköy, where an Ottoman Palace has been transformed into dining, arts and culture, and cinema complex lining the Bosporus, dekk Istanbul’s innovative social space is similar to a shopping center food court. Here all of the dining options are available in a communal seating area, but the dining options just so happen to be some of the city’s most delicious, hip and happening venues.

Dekk Istanbul is open from Tuesdays to Sundays from noon to midnight. Entrance is free and even pets are allowed, however, some special events may require tickets for entry. Keep in mind that as per pandemic regulations, a HES (Life Fits Into Home, in Turkish "Hayat Eve Sığar") code will be required at both Müze Gazhane and dekk Istanbul and when attending special ticketed performances, a double vaccination certificate or a negative PCR test result from within the past 48 hours will be required to enter either venue.