Nostalgic letters: Taking a gander by Kuzguncuk Sahaf along with Istanbul’s multicultural past 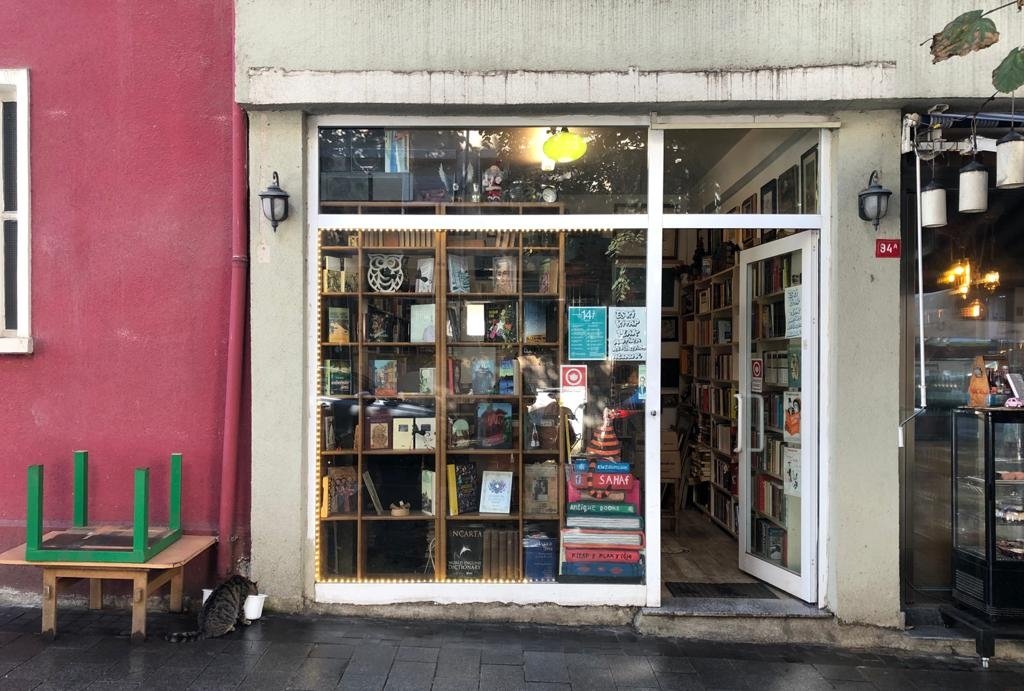 The Kuzguncuk Sahaf sits on the corner of a road lined with street-side cafes and artsy shops. (Photo by Matt Hanson)
by Matt Hanson Nov 17, 2020 11:00 am
Edited By Yasemin Nicola Sakay

There is a bijou, one-room used bookshop halfway up Icadiye Avenue, the main thoroughfare in Kuzguncuk, that storied neighborhood uniquely representative of old Istanbul's ethnic and religious diversity

It is a cleaning day for Hamza the bookseller, and he is not in a good mood. Books, especially second-hand books, spell clutter for contemporaries, who are tasked with mining the vast cultural industries of centuries past. Hamza, the shopkeeper at Kuzguncuk Sahaf, is a bespectacled, serious young man, dressed neatly in a plain, grey sweater, suitable for autumn, over a collared shirt. His guests mostly pass by, outside the entrance to his shop, which is rife with heaps of fallen stacks, uncategorized and disorganized.

A sahaf, in Turkish, translates, loosely to the beloved used bookshops that have become one of the cultural mainstays of cities throughout Turkey, where vintage volumes, vinyls and visions of the past in all of their sundry manifestations come back to haunt, satisfyingly, far-flung urban explorers and unsuspecting locals alike. The Kuzguncuk Sahaf is uniquely poised to offer a reflection of its neighborhood history, where Armenian, Greek, Jewish and Muslim Turkish inhabitants once lived as friends and family.

Hamza, however, is busy vacuuming in between the nooks and crannies left in the single room, which is overwhelmed with printed and multimedia materials, in boxes, shelved and otherwise displayed on the walls or hidden under layers of olden figments of long histories. If someone asks a question in passing from the street about a book he might carry, his answer is usually in the negative. The erudite inhabitants of Kuzguncuk are as progressive as they are steeped in an altogether unique island of sometimes obscure, socio-historical perspectives.

And yet, the Kuzguncuk Sahaf is not entirely eccentric. It is stocked with new books, uncreased spines and unmarked pages, and located along the main thoroughfare in the quarter that stands out like a diamond in the rough of Üsküdar, where municipal mandates restrict bars and the like from what has become, instead, the atmosphere of a small town at nights. Kuzguncuk, in that sense, is a singular world unto itself in Istanbul, a veritable village on the Bosphorus as it was once known to its multicultural networks across the Black Sea.

On books and nostalgia

I lived in Kuzguncuk for a year. It was there where I gained ground to refresh my career, approaching arts journalism in Turkey, a country I never dreamed of calling home. Its nostalgia, precious to national consciousness as a place where historic, religious and ethnic minorities once lived together for generations, evokes my former days whiling away weekend afternoons in its cafes, peering out over the blue waves of the Bosphorus from its modest coastal park, breathing in the fresh air of its community garden.

I would drift past the Kuzguncuk Sahaf like a breeze, offering Hamza a kind greeting. But I had never fully perused the books that he sells, even if haphazardly. That said, the books that he has labeled and shelved are clearly delineated according to genre, topic and language. Mostly, when I lived in Kuzguncuk, the idea of appreciating writing in Turkish was a fantasy, yet, as the seasons have changed and I have remained, moving back and forth across the Bosphorus over the years, I have come to admire Turkey's diverse publishing industry.

From outside the shop, which is on a corner along Icadiye Avenue, a road lined with open-air and street-side cafes aplenty in creative collaboration with gallerists, restauranteurs, ceramicists and landscapers, Hamza curated a distinctive display, including multiple editions of "The Little Prince," in Turkish and Russian. A hardbound copy of the world classic, "1984" by George Orwell, is a reminder that dystopia, especially in the era of a global pandemic, is closer to reality than perhaps previously thought.

But anyone who knows Kuzguncuk has realized that, besides conserving remnants of social diversity, it is a place where individuals are freer to be themselves, quietly able to integrate more universal identities into daily life, like being a poet or painter. At his storefront, Hamza presents a bilingual volume, "Microhistory of the Turkish Poets (1920-2016)" beside the influential text, "Portraits" by John Berger, and coffee table books on the 16th-century artists Pieter Bruegel and Giuseppe Arcimboldo.

A vision of literacy

Kuzguncuk Sahaf, like many surrounding small businesses, relays the neighborhood as it is experienced in the popular imagination of Istanbul, with its antique homes, renovated to their proud aesthetic largely by the late architect Cengiz Bektaş, their slim brick-lain builds and bay windows hanging overpeopled streets with vibrant textures and homely moods. There is arguably no painter who has visualized this ideal more prolifically than Lesya Demchenko, whose canvases are exhibited between books and on the walls of the Kuzguncuk Sahaf.

Her artwork has become part of the Kuzguncuk experience, reflecting the soul of its century homes, their eternal character uniquely apt as a frozen, unforgettable moment in time by the tip of a paintbrush. And the works of fellow neighborhood artist, a portrait illustrator who goes by the moniker Aptulika, adorn the bibliophilic walls of the Kuzguncuk Sahaf. For my first art review in this newspaper, I wrote about a gallery show by Aptulika in the basement of the new bookstore, Nail Kitabevi, built by famous early modern architects, the Balyan brothers.

Another fixture is the poet Can Yücel, who lived on an alley now bearing his name not far uphill from the Kuzguncuk Sahaf. It is rumored that, in a bathrobe in slippers, he would stroll past the shopkeepers and gardeners along Icadiye Avenue, which prior to modern urbanization flowed with a stream, before sitting at the shorefront fish restaurant to poeticize. His poem, Man's Principle Law goes, "This is man’s law of reason: to convert water to light / to render the dream true / to make the enemy a friend!" as translated by Ruth Christie.

Kuzguncuk Sahaf carries a number of the original Turkish-language poetry books that Yücel published to unrivaled acclaim throughout his life. He became something of a personality, his bushy white crest of hair crowning his burly, bearded face, as a man's man, and a poet's poet who waxed nostalgic about Kuzguncuk in his direct, sensual verse. With its idiosyncratic cast of characters, Kuzguncuk is rife with material for the theater, which makes Metin And's book, "A Short History of Turkish Theater," also at Kuzguncuk Sahaf, essential.

I am consistently, pleasantly surprised by the breadth and depth of literary material, both to read, and as inspiration for writing, at the sahaf, and that which Kuzguncuk maintains is certainly characteristic. Whether it is an unweathered tract on Balkan cinema by Dina Iordanova or a 1930 edition of a French play by Marcel Pagnol, signed by its previous owner in 1968, discoveries run the gamut of the world’s cultural geography. Even its dustier books, like, "Armenian Letters, Turkish Texts" by Kevork Pamukciyan still speak volumes.