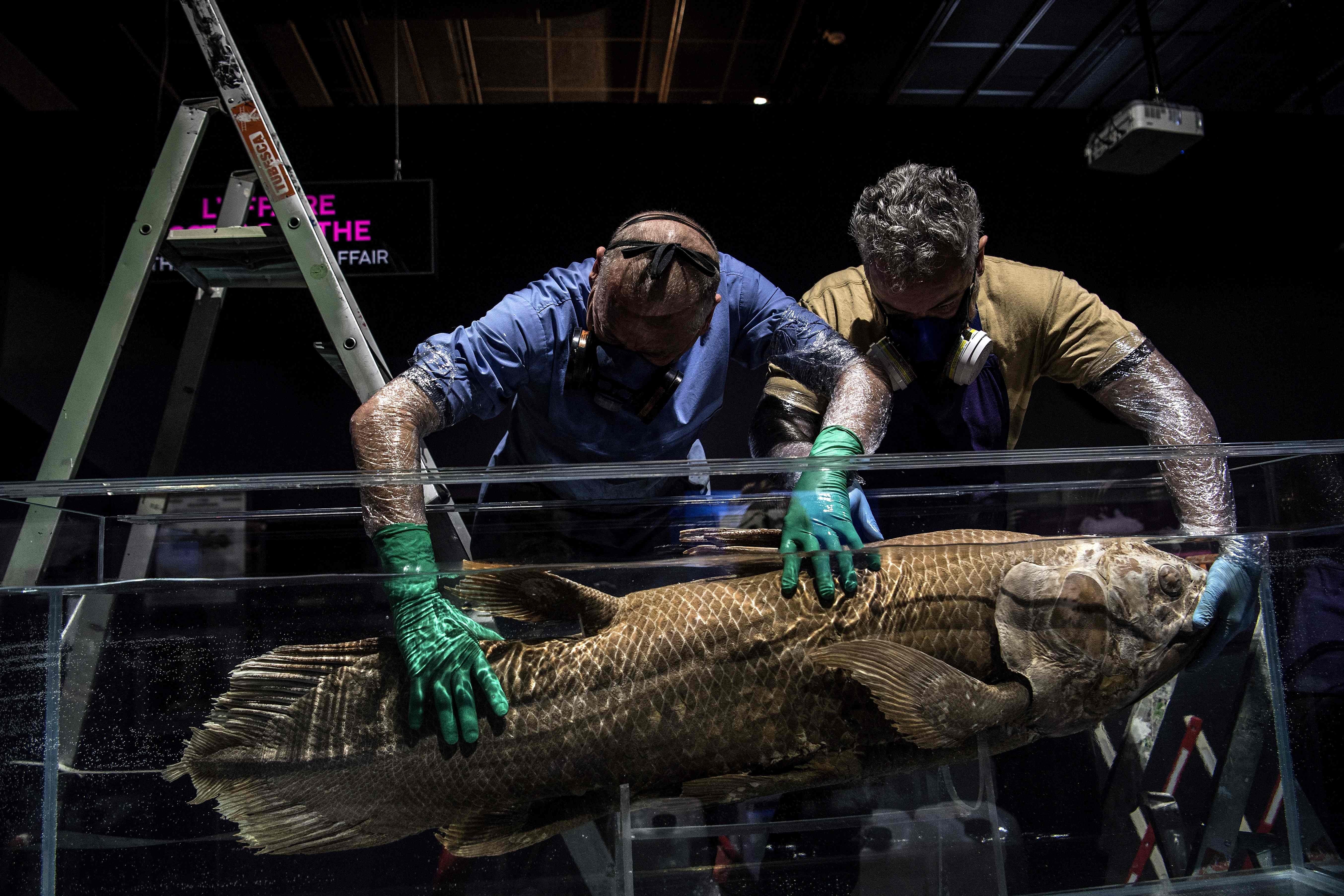 Taxidermists install a coelacanth in a formol-filled tank for the 'Ocean' exhibition ahead of its opening at the National Museum of Natural History (Museum d'Histoire Naturelle) in Paris, France, March 29, 2019. (AFP Photo)
by REUTERS Jun 18, 2021 6:49 pm
RECOMMENDED

After being mistakenly categorized as extinct for 66 million years only to be discovered alive in 1938 off the coast of South Africa, the coelacanth is once again making headlines for a couple of new, record-setting surprises.

Scientists said a new study of these large and nocturnal deep-sea denizens shows that they boast a lifespan about five times longer than previously believed – roughly a century – and that females carry their young for five years, the longest-known gestation period of any animal.

Focusing on one of the two living species of coelacanth (pronounced SEE-lah-canth), the scientists also determined that it develops and grows at among the slowest pace of any fish and does not reach sexual maturity until about age 55.

The researchers used annual growth rings deposited on the fish's scales to determine the age of individual coelacanths – "just as one reads tree rings," said marine biologist Kelig Mahe of the French oceanographic institution IFREMER, lead author of the study published this week in the journal Current Biology.

Coelacanths first appeared during the Devonian Period roughly 400 million years ago, about 170 million years before the dinosaurs. Based on the fossil record, they were thought to have vanished during the mass extinction that wiped out about three-quarters of Earth's species following an asteroid strike at the end of the Cretaceous Period.

After being found alive, the coelacanth was dubbed a "living fossil," a description now shunned by scientists.

"By definition, a fossil is dead, and the coelacanths have evolved a lot since the Devonian," said biologist and study co-author Marc Herbin of the National Museum of Natural History in Paris.

It is called a lobe-finned fish based on the shape of its fins, which differ structurally from other fish. Such fins are thought to have paved the way for the limbs of the first land vertebrates to evolve.

Coelacanths reside at ocean depths of as much as half a mile (800 meters). During daylight hours they stay in volcanic caves alone or in small groups. Females are somewhat larger than males, reaching about seven feet (two meters) long and weighing 240 pounds (110 kilograms).

Previous research had suggested roughly a 20-year lifespan and among the fastest body growth of any fish. It turns out that this was based on a misreading decades ago of another type of ring deposited in the scales.

"After reappraisal of the coelacanth's life history based on our new age estimation, it appears to be one of the slowest – if not the slowest – among all fish, close to deep-sea sharks and roughies," said IFREMER marine evolutionary ecologist and study co-author Bruno Ernande.

"A centenarian lifespan is quite something," Ernande added.

The Greenland shark, a big deep-ocean predator, can claim the distinction of being Earth's longest-living vertebrate, with a lifespan reaching roughly 400 years. The world's oldest shark, found in the North Atlantic, may have been born as early as 1505 – when Istanbul had been under Ottoman control for just 52 years.

Ernande said the researchers were astounded when they figured out the coelacanth's record gestation period, which exceeds the 3.5 years of frilled sharks and the two years of elephants and spiny dogfish sharks.

The researchers said late sexual maturity and a lengthy gestation period, combined with low fecundity and small population size, makes coelacanths particularly sensitive to natural or human-caused environmental disturbances such as extreme climate events or too much accidental fishing.