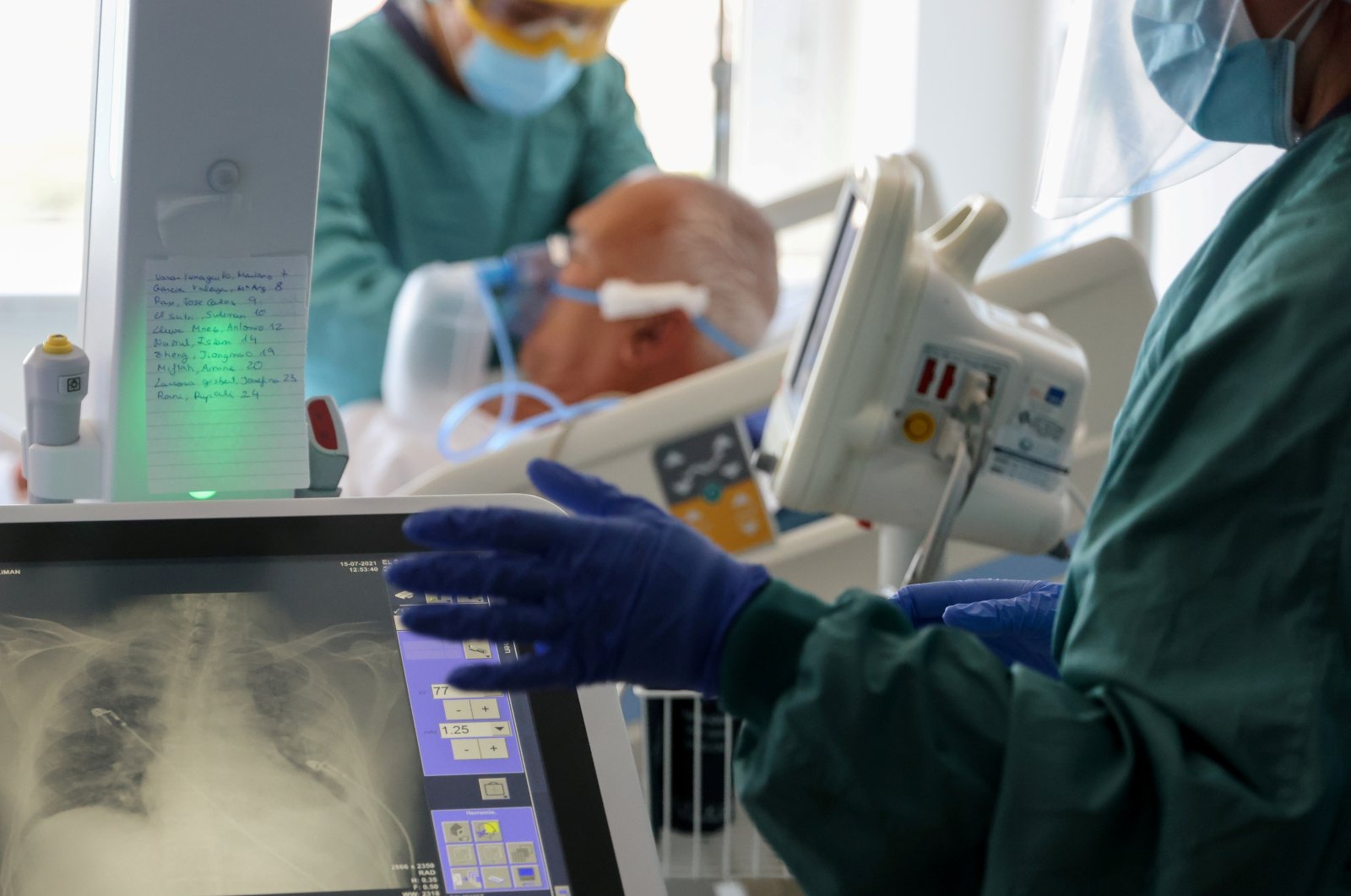 Hospital staff do an X-ray of the lung of a patient suffering from the coronavirus disease at Hospital del Mar, where an additional ward has been opened to deal with an increase in patients in Barcelona, Spain, July 15, 2021. (Reuters Photo)
by Reuters Jul 26, 2021 2:24 pm
RECOMMENDED

Just as the world catches a glimpse out of the woods, COVID-19 throws another curveball at the globe, as the delta variant has now become the fastest, fittest and most formidable version of the coronavirus, gradually altering the knowledge on the disease just as nations begin to reopen from lockdowns, virologists and epidemiologists say.

Vaccine protection remains very strong against severe infections and hospitalizations caused by any version of the coronavirus, and those most at risk are still the unvaccinated, according to interviews with 10 leading COVID-19 experts.

The major worry about the delta variant, first identified in India, is not that it makes people sicker, but that it spreads far more easily from person to person, increasing infections and hospitalizations among the unvaccinated.

Evidence is also mounting that it is capable of infecting fully vaccinated people at a greater rate than previous versions, and concerns have been raised that they may even spread the virus, these experts said.

"The biggest risk to the world at the moment is simply delta," said microbiologist Sharon Peacock, who runs Britain's efforts to sequence the genomes of COVID-19 variants, calling it the "fittest and fastest variant yet."

Viruses constantly evolve through mutation, with new variants arising. Sometimes these are more dangerous than the original.

Until there is more data on delta variant transmission, disease experts say that masks, social distancing and other measures set aside in countries with broad vaccination campaigns may again be needed.

Public Health England said Friday that out of a total of 3,692 people hospitalized in Britain with the delta variant, 58.3% were unvaccinated and 22.8% were fully vaccinated. In Singapore, where delta is the most common variant, government officials reported Friday that three-quarters of its COVID-19 cases occurred among vaccinated individuals, though none were severely ill.

Israeli health officials have said 60% of current hospitalized COVID-19 cases are in vaccinated people. Most of them are age 60 or older and often have underlying health problems.

In the United States, which has experienced more COVID-19 cases and deaths than any other country, the delta variant represents about 83% of new infections. So far, unvaccinated people represent nearly 97% of severe cases.

"There is always the illusion that there is a magic bullet that will solve all our problems. The coronavirus is teaching us a lesson," said Nadav Davidovitch, director of Ben Gurion University's school of public health in Israel.

'Teaching us a lesson'

The Pfizer-BioNTech vaccine, one of the most effective against COVID-19 so far, appeared only 41% effective at halting symptomatic infections in Israel over the past month as the delta variant spread, according to Israeli government data. Israeli experts said this information requires more analysis before conclusions can be drawn.

"Protection for the individual is very strong; protection for infecting others is significantly lower," Davidovitch said.

A study in China found that people infected with the delta variant carry 1,000 times more virus in their noses compared with the ancestral Wuhan strain first identified in that Chinese city in 2019. "You may actually excrete more virus and that's why it's more transmissible. That's still being investigated," Peacock said.

Virologist Shane Crotty of the La Jolla Institute for Immunology in San Diego noted that delta is 50% more infectious than the alpha variant first detected in the United Kingdom. "It's outcompeting all other viruses because it just spreads so much more efficiently," Crotty added.

Genomics expert Eric Topol, director of the Scripps Research Translational Institute in La Jolla, California, noted that delta infections have a shorter incubation period and a far higher amount of viral particles. "That's why the vaccines are going to be challenged. The people who are vaccinated have got to be especially careful. This is a tough one," Topol said.

In the United States, the delta variant has arrived as many Americans – vaccinated and not – have stopped wearing masks indoors.

"It's a double whammy," Topol said. "The last thing you want is to loosen restrictions when you're confronting the most formidable version of the virus yet," he explained.

The development of highly effective vaccines may have led many people to believe that once vaccinated, COVID-19 posed little threat to them.

"When the vaccines were first developed, nobody was thinking that they were going to prevent infection," said Carlos del Rio, a professor of medicine and infectious disease epidemiology at Emory University in Atlanta. The aim was always to prevent severe disease and death, del Rio added.

The vaccines were so effective, however, that there were signs the vaccines also prevented transmission against prior coronavirus variants. "We got spoiled," del Rio said.

Dr. Monica Gandhi, an infectious diseases doctor at the University of California, San Francisco, said, "People are so disappointed right now that they're not 100% protected from mild breakthroughs" – getting infected despite having been vaccinated.

But, Gandhi added, the fact that nearly all Americans hospitalized with COVID-19 right now are unvaccinated "is pretty astounding effectiveness."