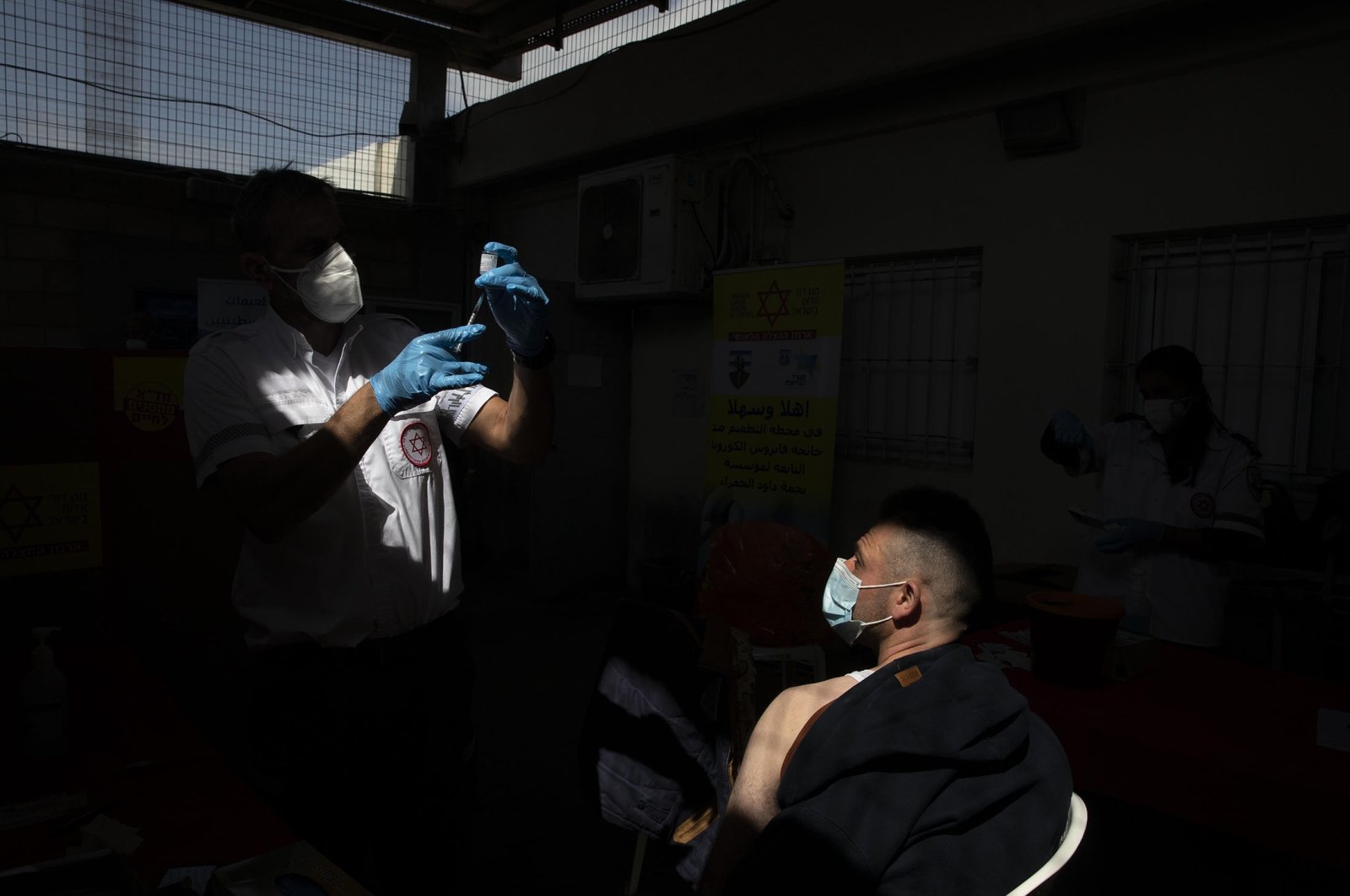 In this March 8, 2021, file photo, a Palestinian worker who works in Israel receives a Moderna COVID-19 vaccine at the Tarkumiya crossing between the West Bank and Israel. (AP Photo)
by REUTERS Apr 11, 2021 11:15 am
Edited By Yasemin Nicola Sakay
RECOMMENDED

This week's roundup of some of the latest scientific studies on the coronavirus and efforts to find treatments and vaccines for COVID-19 consists of updates on the current vaccines in use, especially how they fare in immunotherapy patients, the side effects from injection and their antibody performance.

The mRNA COVID-19 vaccine from Pfizer and BioNTech is safe for patients being treated with cancer immunotherapies like Merck & Co.'s Keytruda and Opdivo sold by Bristol Myers Squibb, Israeli physicians said in a report published in The Lancet Oncology.

They studied 134 vaccine recipients who were being treated with the so-called immune-checkpoint inhibitors, including some who were also receiving chemotherapy. The vaccine was "safe from both sides: We did not see immunotherapy-related side effects and did not see severe side effects from the vaccine itself," said the report's co-author Dr. Ido Wolf of the Tel Aviv Sourasky Medical Center.

"We believe that the vaccine should be given to these patients ... especially in areas of an active COVID-19 outbreak." However, questions still need to be answered for these patients, including whether there are any long-term issues.

"We looked at our patients only a few weeks from the second dose and cannot rule out the possibility of long-term side effects," Wolf said. His team is also looking into whether other cancer drugs, such as chemotherapies, may reduce the efficacy of the vaccine.

Skin reactions to mRNA vaccines have not been serious

A wide range of skin reactions has been documented in recipients of the mRNA vaccines from Pfizer-BioNTech and Moderna, but none have been serious, according to researchers who analyzed 414 cases in a registry run by dermatology societies.

The majority (83%) were associated with the Moderna shot. Most started the day after, or often several days to a week, after vaccination, said Dr. Esther Freeman of Massachusetts General Hospital in Boston, who co-authored a report published in the Journal of the American Academy of Dermatology.

"If the patient develops a delayed-onset rash more than four hours after vaccination, while the rash may be uncomfortable, our data suggest they ... should feel comfortable proceeding with the second dose of their vaccine," Freeman said. However, she added, hives that start within four hours after vaccination "should be taken very seriously," as that may be a sign of an immediate allergic reaction.

The U.S. Centers for Disease Control and Prevention (CDC) recommends referral to an allergist-immunologist in those cases.

A follow-up study of 33 people who received Moderna Inc.'s COVID-19 vaccine in early trials shows the antibodies it induced are still present six months after the second dose.

The researchers conducting the Moderna vaccine study will continue to follow the same volunteers to see whether the antibodies last longer than six months. They are also evaluating the potential for a booster dose to extend the duration of the antibodies and improve their potency against new more contagious variants of the coronavirus.

Lung transplants can save some COVID-19 survivors

Surgeons worldwide have been performing lung transplants in COVID-19 survivors with irreversible lung damage, and an international group of transplant experts has proposed guidelines for the selection of eligible patients.

To possibly qualify for a transplant, COVID-19 survivors with complete lung failure should be younger than 65, nonsmokers and have no pre-existing medical conditions, or only manageable ones, they advise. They said transplants should be performed at least four weeks after a diagnosis of irreversible lung damage.

In the United States alone, more than 50 double lung transplants have been performed on COVID-19 survivors, and all the patients are alive, said Dr. Ankit Bharat of Northwestern Medicine in Chicago, who has performed a dozen of them.

A study published in The Lancet Respiratory Medicine that examined 12 of the first double-lung transplants performed in COVID-19 patients in the United States, Italy, Austria and India showed that all but two survived and are doing well, said co-author Bharat. "It's a really remarkable outcome, given how critically ill these patients were," he said. "Without the possibility of a transplant, the medical team and the families were ready to withdraw care."