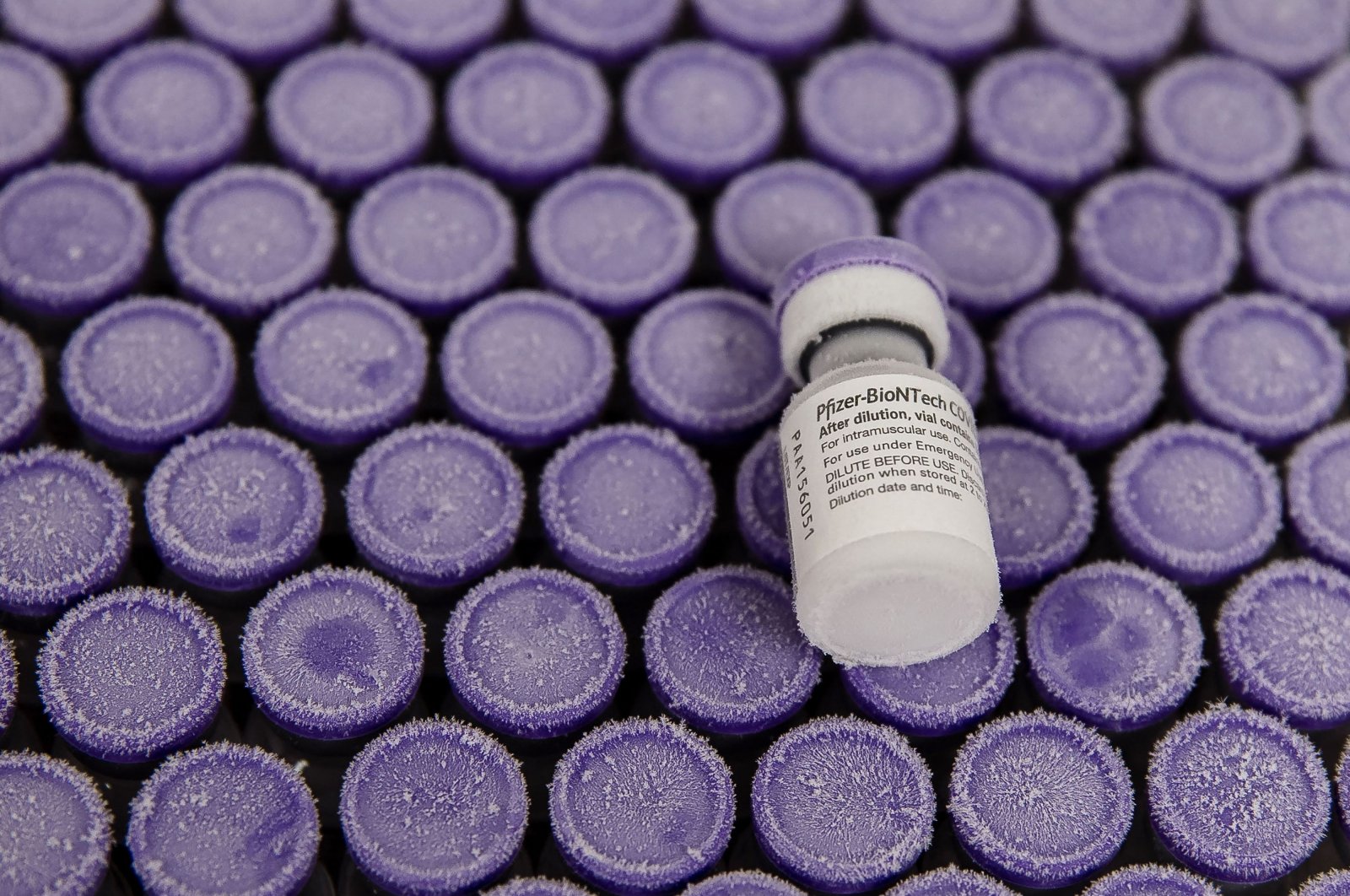 Pfizer-BioNTech's COVID-19 vaccine is pictured at Rady Children's Hospital before it's placed back in the refrigerator, in San Diego, California, U.S., Dec. 15, 2020. (AFP Photo)
by Associated Press Oct 22, 2021 5:39 pm
RECOMMENDED

Pfizer has revealed that kid-size doses of the Pfizer-BioNTech COVID-19 vaccine had shown more than 90% efficacy in preventing symptomatic forms of the coronavirus in children aged 5 to 11 in a clinical trial, according to study details released Friday.

The shots could begin in early November – with the first children in line fully protected by Christmas – if regulators give the go-ahead.

Details of Pfizer's study were posted online. The Food and Drug Administration (FDA) was expected to post its independent review of the company's safety and effectiveness data later in the day.

Advisers to the FDA will publicly debate the evidence next week. If the agency ultimately authorizes the shots, the Centers for Disease Control and Prevention (CDC) will make the final decision on who should receive them.

Full-strength Pfizer-BioNTech shots already are authorized for anyone 12 or older, but pediatricians and many parents are anxiously awaiting protection for younger children to stem rising infections from the extra-contagious delta variant and help keep children in school.

More than 25,000 pediatricians and primary care providers already have signed up to get the shots into little arms.

The Biden administration has purchased enough kid-size doses – in special orange-capped vials to distinguish them from adult vaccine – for the nation's roughly 28 million 5- to 11-year-olds. If the vaccine is cleared, millions of doses will be promptly shipped around the country, along with kid-size needles.

A Pfizer study tracked 2,268 children in that age group who got two shots three weeks apart of either a placebo or the low-dose vaccine. Each dose was one-third the amount given to teens and adults.

Researchers calculated the low-dose vaccine was nearly 91% effective, based on 16 COVID-19 cases in youngsters given dummy shots versus three cases among vaccinated children. There were no severe illnesses reported among any of the youngsters, but the vaccinated ones had much milder symptoms than their unvaccinated counterparts.

In addition, young children given the low-dose shots developed coronavirus-fighting antibody levels just as strong as teens and young adults who got regular-strength vaccinations.

The CDC reported earlier this week that even as the delta mutant surged between June and September, Pfizer-BioNTech vaccinations were 93% effective at preventing hospitalizations among 12- to 18-year-olds.

Pfizer's study of younger kids found the low-dose shots proved safe, with similar or fewer temporary side effects such as sore arms, fever or achiness that teens experience.

The study isn't large enough to detect any extremely rare side effects, such as the heart inflammation that occasionally occurs after the second dose, mostly in young men.

While children run a lower risk of severe illness or death than older people, COVID-19 has killed more than 630 Americans 18 and under, according to the CDC. Nearly 6.2 million children have been infected with the coronavirus, more than 1.1 million in the last six weeks as the delta mutant surged, the American Academy of Pediatrics said.

Moderna also is studying its COVID-19 shots in elementary school-age youngsters. Pfizer and Moderna are studying even younger children as well, down to 6-month-olds. Results are expected later in the year.