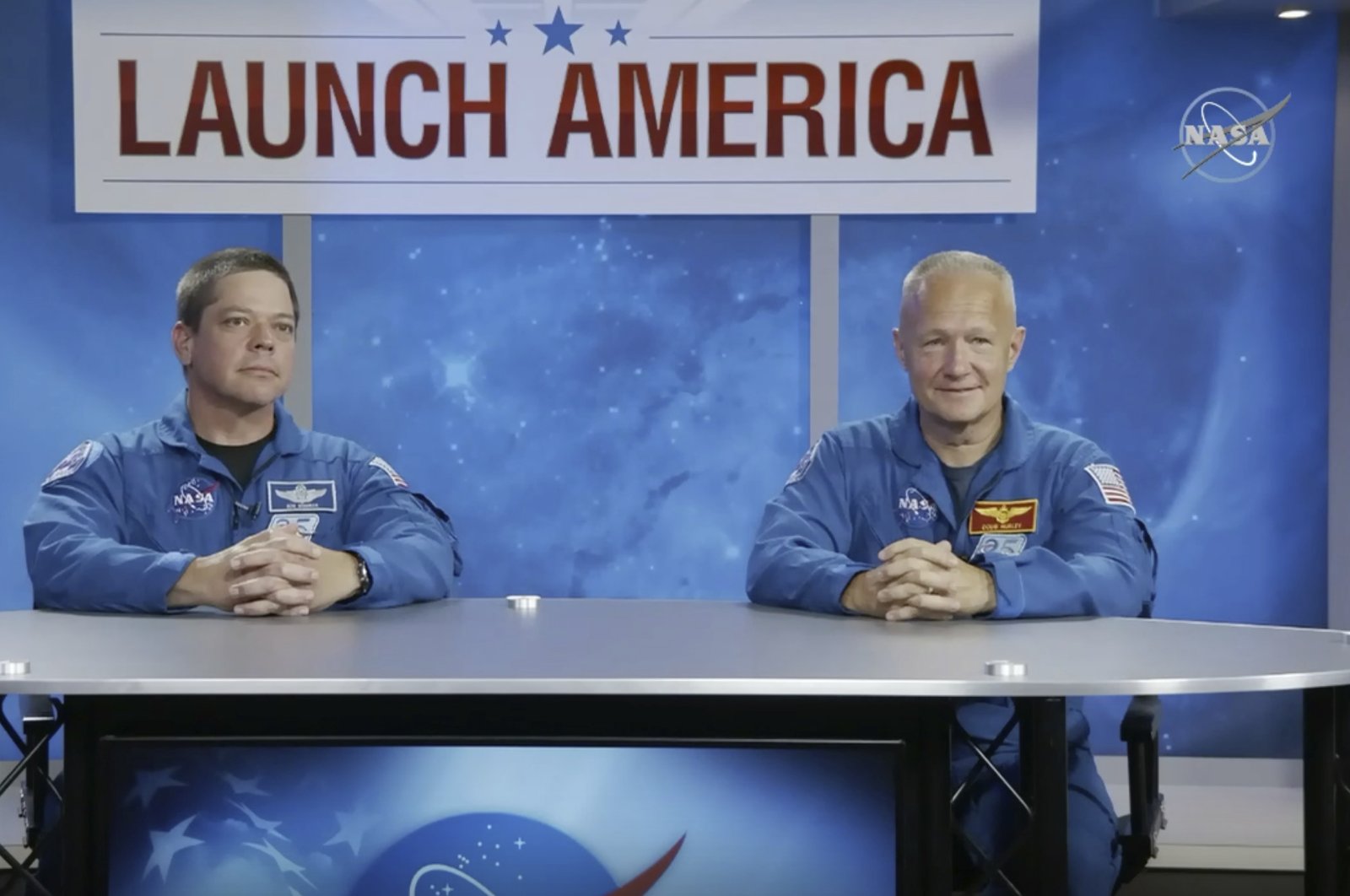 In this image from video made available by NASA, astronauts Bob Behnken, left, and Doug Hurley give a news conference at the Johnson Space Center in Houston on Friday, May 1, 2020. (AP Photo)
by French Press Agency - AFP May 01, 2020 10:34 pm
RECOMMENDED

NASA and SpaceX said Friday they were pressing ahead with plans to launch astronauts to space from United States soil for the first time in a decade later this month, despite the COVID-19 pandemic.

Robert Behnken and Douglas Hurley, both veterans of the Space Shuttle program that was shuttered in 2011, will blast off from the Kennedy Space Center in Cape Canaveral, Florida on May 27.

NASA administrator Jim Bridenstine told reporters that the SpaceX Crew Dragon capsule will be only the fifth class of U.S. spacecraft to take human beings into orbit, after the storied Mercury, Gemini, Apollo and Space Shuttle programs.

"If you look globally, this will be the ninth time in history when we put humans on a brand new spacecraft," said Bridenstine.

"We're going to do it here in the midst of the coronavirus pandemic. I'm going to tell you this is a high priority mission for the United States of America," he added.

But, he said, NASA was asking that people avoid traveling to the space center to witness the spectacle.

"That makes me sad to even say it boy, I wish we could make this into something really spectacular," he said.

Behnken and Hurley, who have been training for the "Demo-2" mission for years, will dock with the International Space Station (ISS) and then remain there for between one to four months, depending on when the next mission takes place, said NASA's Steve Stich.

Crew Dragon is able to remain in orbit for around four months (119 days).

The mission is a major milestone for SpaceX, the company founded by billionaire Elon Musk, who also leads and founded Tesla.

His firm, which was founded in 2002, has now overtaken aerospace behemoth Boeing, which failed in the uncrewed demonstration mission of its Starliner spacecraft last year and will have to start over.

SpaceX, which has received billions of dollars from NASA since the late 2000s, has been supplying cargo to the ISS since 2012, and has established itself as the leader in the private space sector thanks to its reusable rocket, the Falcon 9.

The pandemic has, naturally, impacted the program, but Shotwell said that all precautions were being taken to protect the astronauts.

"We are ensuring that only essential personnel are near them. They're wearing masks and gloves. We're cleaning the training facility twice daily."

"I think we're really doing a great job to ensure that we are not impacting the safety or the health of the astronauts' lives."